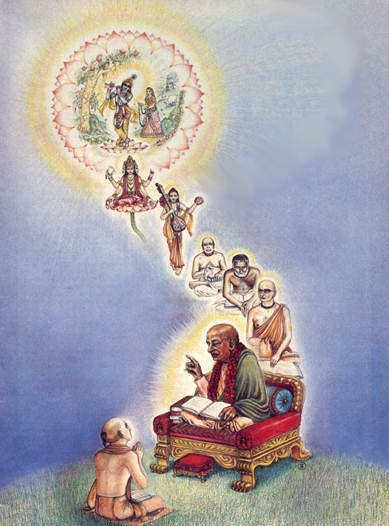 (1) In the beginning of creation the science of devotional service was received by the four-headed Brahma from
the Supreme Lord Sri Krishna. Devarshi Narada’s understanding of this divine science was obtained from Brahma.
The great sage Krishna Dvaipayana Vyasa who was empowered to compile the Vedic literatures, became a disciple
of Devarshi Narada. Sripada Madhvacarya, the founder of the suddha-dvaita school of Vedanta-philosophy,
who visited Vyasadeva at Badarikasrama in the thirteenth century to learn from him Vedanta philosophy,
calls himself a servant of Krishna Dvaipayana Vyasa. Purnaprajna Tirtha [Madhva] is the guru and sole refuge
of Padmanabha Tirtha.

(3) Dayanidhi received the science of devotional service from Jnanasindhu, and the servant of Dayanidhi
was Vidyanidhi [Vidyadhiraja Tirtha]. Rajendra Tirtha became a disciple of Vidyadhiraja Tirtha. Rajendra
Tirtha’s servant was known as Jayadharma or Vijayadhvaja Tirtha. In this way you should properly understand
this disciplic succession.

(5) The chief disciple of Madhavendra Puri was Isvara Puri, and two of his other disciples were the
renowned incarnations of Godhead Sri Nityananda and Advaita Acarya. Sri Caitanya Mahaprabhu, the
spiritual preceptor of all the worlds, made Isvara Puri greatly fortunate by accepting him as His spiritual master.

(6) Mahaprabhu Sri Caitanya is nondifferent from Sri Sri Radha and Krishna and is the very life of those
Vaishnavas who follow Sri Rupa Gosvami. Sri Svarupa Damodara Gosvami, Rupa Gosvami, and Sanatana
Gosvami were the givers of great happiness to Visvambhara [Sri Caitanya].

(7) The great souls Jiva Gosvami and Raghunatha dasa Gosvami became very dear to Rupa Gosvami. Jiva
Gosvami was a disciple of Rupa Gosvami, and Raghunatha dasa Gosvami, a disciple of Advaita Acarya’s
disciple Yadunandana Acarya, was accepted by Rupa and Sanatana as their third brother. Raghunatha
dasa Gosvami’s beloved student was Krishnadasa Kaviraja Gosvami. Krishnadasa Kaviraja was an intimate friend
of Lokanatha Gosvami. They lived together in Vrindavana and always discussed the topics of Krishna with
one another. Lokanatha Gosvami, a disciple of Gadadhara Pandita, had only one disciple, whose name
was Narottama dasa. Narottama dasa was always engaged in the service of his guru, and he also engaged himself
in the service of his guru’s intimate friend. Thus he became very dear to Krishnadasa Kaviraja Gosvami. To serve
the feet of Narottama dasa Thakura was the only desire of Visvanatha Cakravarti Thakura, who was the
fourth acarya in disciplic succession from Narottama dasa.

(8) Visvanatha Cakravarti Thakura was the siksha-guru [instructing spiritual master of Baladeva Vidyabhushana,
to whom he taught the precepts of Srimad-Bhagavatam. Jagannatha dasa Babaji was a very prominent acarya
after Sri Baladeva Vidyabhushana and was the beloved siksha-guru of Sri Bhaktivinoda Thakura.
Bhaktivinoda Thakura’s intimate friend and associate was the eminent maha-bhagavata Sri Gaurakisora
dasa Babaji, whose sole joy was found in hari-bhajana.

(9) These great saintly Vaishnavas are all paramahamsas, or devotees of the highest order, and they are all part
of Lord Gauranga’s own spiritual family. Their holy feet are my refuge. I have no real interest in devotional
service, and I am a poor and lowly tridandi sannyasi named Sri Bhaktisiddhanta Sarasvati.
sri-varshabhanavi-bara, sada sevya-seva-para,
tahara dayita-dasa-nama
tara pradhan pracarako, sri-bhaktivedanta namo,
patita-janete doya-dhama
The renowned Sri Varshabhanavi-dayita dasa [the initiated name of Bhaktisiddhanta Sarasvati] is always engaged
in the service of his spiritual master, Srila Gaurakisora dasa Babaji. His foremost disciple-preacher is Sri A.
C. Bhaktivedanta Swami Prabhupada, who has spread the message of Lord Caitanya throughout the world and
is thus a reservoir of mercy and compassion for all fallen souls.

Go Back To More Bhajans By Bhaktisiddhanta Saraswati Thakur OR All Vaishnava Acharyas.