This place situated not far from the Navadwipa – Katva road, not far from the turn to the side of Mamgachi and mentioned with huge Banyan tree. Bhaktivinod Thakur says that before here was not big forest for ascetics and later the attractive palace of Jahnu Muni. In “Navadwipa bhava Taranga” it says that: “In the north to Vidyanagar there is shining Jahnudwipa, where the Temple for renounced people is seen, which belongs to Jahnu Muni. There Jahnu Muni drank Ganges and later she became as his daughter Jahnavi.

This story is explained in the 9th Canto of Srimad Bhagavatam.

By the request of the sage Aurva, Maharaja sagara did ashvamedhya yagya and by that pleased the Supreme Personality of Godhead – Supreme Controller, who is in everyone's heart. But king of heavens Indra stole the sacrifice horse.

Proud of their power sons of Sumati by the request of their father went to look for that horse. Wishing to find it they started to dig the ground.

In the north – east they found the lost horse which was feed at the ashram of Kapila Muni. “This is the person who stole the horse” they cried out. “He is sitting with closed eyes. It might he is a great sinner. Kill him! Kill him!” with these words all 60 thousand sons of king Sagar took their guns. But when they came close to the sage, he opened his eyes.

Being cheated by Indra sons of Sagar offended the great sage. Because of that their bodies fired up and their bodies turned into ashes.

Later the grand son of king Sagar Amshuman went in search for the horse. Following the same path as his uncles Amshuman reached the place where he found ashes and nearby saw the lost horse jumper. Great Amshman also saw the great sage Kapila Muni – the incarnation of Lord Vishnu. Amshuman paid his humble obeisance and offered his prayers.

Supreme Lord told: “Dear Amshuman, here it is the animal which your father searched for. Take it! And your uncles can be delivered only with the waters of Ganges, not in any other way…

King Amshuman and his father for a long time performed austerities but they could not bring Ganges to this material world. Later king left his body.

As like his father Amshuman Dilipa also was not able to bring Ganges to this world. By the time he also meet with death. Then Bhagiratha son of Dilipa wishing to bring Ganges to this world started to perform severe austerities. Some times later Mother Ganges appeared to king Bhagiratha and told: “I am very much pleased with Your austerity and ready to fulfill your any desire.” Hearing these words of Gangadevi king paid his obeisance and revealed to her his wished.

Mother Ganges told: “Oh king, I do not want to come to this Earth, because people will take bath in my waters and wash their sins. If those sins get collected in me how will become free from them? Please think of that seriously.”

Bhagiratha told: “That who became pure by performing devotional service and because of that free from material desires; who strictly follows the rules of scriptures; who always lives pure life and is able to liberate all fallen souls. When such like Devotees will take bath in Your waters all those sins done by sinful people will be washed away because they always carry the Supreme Personality of Godhead in their hearts who is the remover of all sins.”

When king Bhagiratha requested Lord Shiva to accept for himself great waters of Ganges, he was agreed and told let it be as you want. From that time Lord Shiva started to keep waters of Ganges on his head, whose waters have great power of purification, because She takes Her beginning from the Lotus feet of Lord Vishnu.

Great king Bhagiratha sent Ganges to the place where his uncles’ ashes were. King Bhagiratha rose up to his fast chariot and run before Mother Ganges, who followed him purifying many countries. The path of Bhagiratha went through present Navadwipa also. Somewhere in those places son of Hotraka great sage Jahnu Muni used to perform his austerities. He was sitting repeating Gayatri mantra with the desire to have darshan of Lord Gauranga. Flowing nearby those places mistakenly Ganges washed away Muni’s glass for achaman. Seeing this Jahnu Muni became very angry and drank all Ganges. Such like strength he took by devotional service.

After some time Bhagiratha mentioned that Ganges does not follow him anymore and went back to check what has happened. Seeing the sage and knowing that he drank the Ganges he started to serve to the sage begging him to bring Her back. After some days Jahnu Muni was agreed and Mother Ganges came out from his ear. Bhagiratha and Ganges went further. It says that time when Ganges meet with Jahnu Muni she divided herself into many flows which created Navadwipa – 9 islands.

After that Ganges was known as Jahnavi – daughter of Jahnu Muni.

Being pleased with Jahnu Muni Lord Gauranga appeared before him. Jahnu Muni prayed to the Lord so that he would be able to take birth again and again in Navadwipa. Lord was agreed and promised him that in the future he will be a victim of Sankirtana movement. 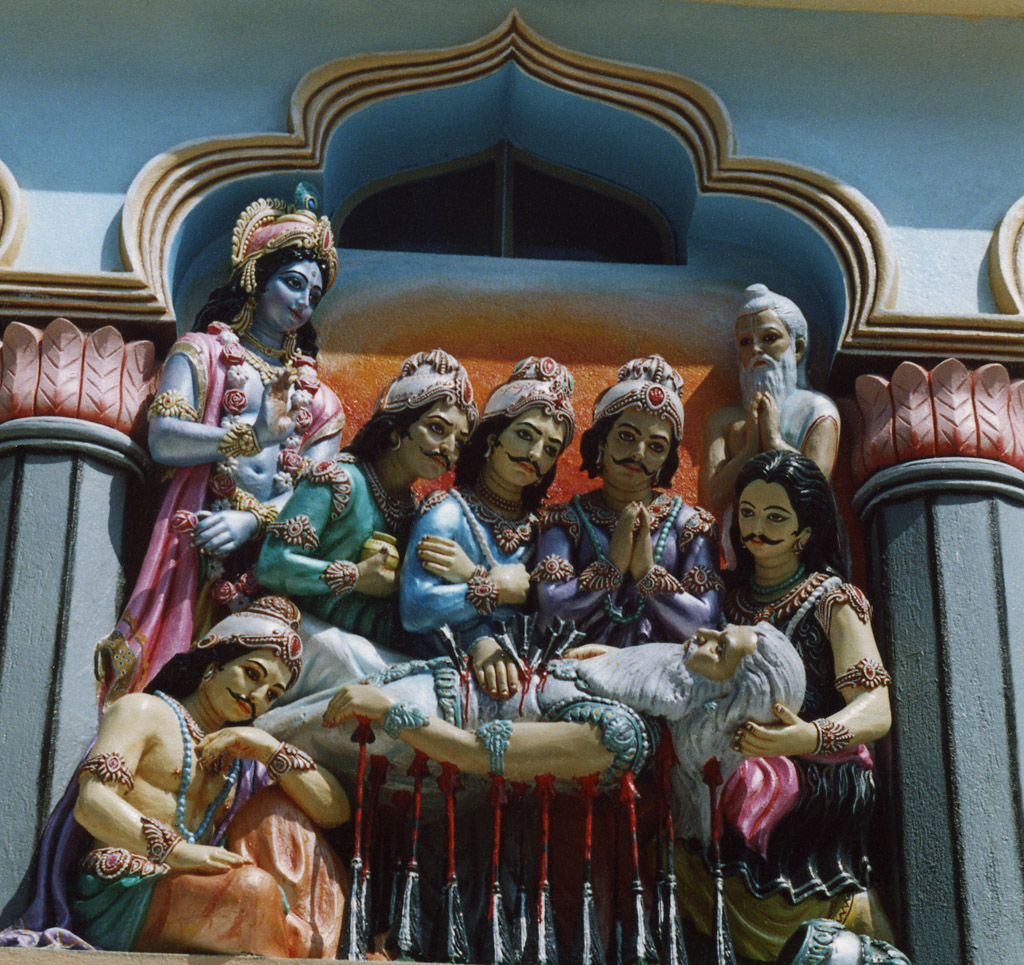 Bhishma Tila is situated a kilometer away from the ashram if Jahnu Muni but it is not marked with anything.

Bhishmadev was the son of king Shantanu and Ganga Devi. Jahnu who was the father of Ganges was his grand father. Graduating the studies in the heavenly planets under the guidance of Bwihaspati Bhishma came to Navadwipa to visit Jahnu Muni. Building up not a big hut nearby the ashram of Jahnu Muni he started to learn from him all material and spiritual knowledge.

“His body, with sandal paste and which is very beautiful, with His effulgence He reminds about melted gold.” (“Mahabharata” Dharma dana parva, 189, “Vishnu sahasra nama stotra”, 79)

“He will appear as renounced sannyasa, unperturbed and serene. He is the great abode of peace and devotion, who forces atheists and impersonalists to be quite.”

“This Jahnudvipa is not other than the forest Bhadravana in Vraj. When I will be able to see that forest? There, on the top of Bhishma Tila – very pure, I will perform my bhajan.

When will come evening and before me appears Bhishma in his spiritual body. Darkish as like Krishna; he will have Tulasi beads on his hands; he will have marks of Tilaka on 12 places of his body; and in great ecstasy he will chant the Holy Names.

“Please, hear me oh that who came to Navadwipa, now I will glorify the glories of Lord Gauranga. Before when I was dying at the battle field of Kurukshetra  I saw Krishna before me. Lord told to me: “Sometimes ago you took darshan of Navadwipa, because of that you will got the mercy of Lord Gauranga. From this time you can live in Navadwipa eternally.

Please leave all your desires and endeavors, just stay in Navadwipa and worship to Gaurahari. From now you should not be fearful of burdens of material things, since you are now for sure will achieve the lotus feet of Gauranga.

By the mercy of the Lord, liberated souls will be able to see here the pastimes of Gaura and Krishna. Here is no any fear, sorrow, death – nothing which brings worries and also material desires. Here are no sufferings.

All pure Devotees deepened into the ocean of happiness, tasting the nectarine service to Krishna. They do not see sufferings, they do not have material desires – they are always here in their spiritual bodies and their desires are pure.

The Supreme Personality of Godhead, of whose Devotees not possible to count is always performing here His pastimes answering to the desires of His Devotees.

This land is unlimited; it does not have any connection with this material world, because here dominates spiritual energy.

It is arranged by Lord so that until one is in this material body and intelligence is attached to this temporary world one is not able to see the original spiritual abode.

But by the mercy of that Lord only you will get spiritual body. Material illusion will be vanished and you will be able to feel unlimited bliss in this spiritual abode.

But for this time you will remain in material body, not forgetting sadhana bhakti for a second. Always serve to Devotees, chant the Holy Names of Krishna, worship Radha Krishna and keep indifference to material enjoyments.

You will have blessing of the Devotees, the Holy Dhama, the Holy Names but keep yourself away from unwanted association. And soon you will reach the Holy Land where everyone serve to Sri Sri Radha and Krishna.

Hearing the instructions of Bhishmadev I will pay to him my obeisance. Blessing me he will disappear and in tears I will go to the forest of Modadruma."