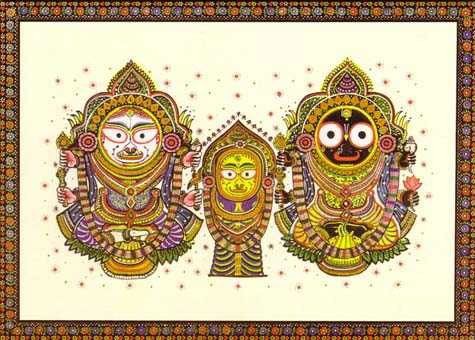 Dwara means door or entrance and Dwaraphita means opening of doors and Mangala Aarati refers to auspicious lamp offerings to the deities early in the morning.
The door opens early in the morning in the presence of five specific Sevayats namely (1) Bhitarachha Mahapatra, (2) Pratihari, (3) Muduli, (4) Akhanda Mekapa and (5) Palia Mekapa. After verification of the “seal” given by a particular sevayat known as Taluchha Mahapatra in the last night. Soon after the opening of the door, Mangal Aarati is performed.

This means removal or taking off the clothes, dress, flowers, tulasi etc. of the previous night. The schedule time of this niti is about 6.00 A.M. in the morning. But it depends on the time taken for Mangala Aarati. The sevakas associated with this niti are (1) three Pushpalakas, (2) Khuntia, (3) Changda Mekapa and (4) Dhoba. Pushpalaka sevakas change the clothes, flowers and tulasi leaves of the deities worn on the previous night. After removal of clothes, the deities wear another set of clean and washed clothes. It is known as tadapalagi. The clothes are called “Tadapa” and “Uttariya” like towels. These are made of cotton worn by the deities for morning bath. As per the tradition, these clothes are washed by the Dhoba sevaka in the kunda (water tank) near Bata Ganesa. This Dhoba sevaka is actually Brahmin by caste.

Purificatory rites like brushing of teeth and bath is known as “Abakash”. At this time, Temple Jyotishi (Astrologer) reads out the tithi (day and date) and other astrological details of the day and according to that, that day's rituals are performed.

At this time deities change their clothes (Tadap and Uttariya) and wear another set of clothes. A sevak known as “Akhanda Mekap” keeps in the sanctum Akhanda Baitha i.e. one lamp which burns till “Pahuda” or the time of the retirement of the deities to bed.

Though this is not a part of the rituals, but about one hour is spent to facilitate pilgrims to go up to “Ratnavedi” or inner sanctums to have a Darshan, without paying fees for it. On certain festive days, Sahanamela is held after “Sandhya dhupa” (Evening Puja or Sandhya Aarati in the month of Kartik) and after Sakaldhupa (in the month of Pausha). Some times this Darshan is not allowed for some special rituals of the deities.

After Sahanamela the deities are again dressed up which can be witnessed from a little distance i.e."Bhitara Katha". At this time, Deities are also adorned with gold and precious stones to suit different festive occasions.

While some sevayats are busy with vesha lagi or the Deities, Pujapandas at that time perform “Rosha Homa” (Fire Sacrifice) at the kitchen and “Surya puja” at the surya temple near “Mukti Mandap”. Then the images of two gate keepers named Jaya and Vijaya on the entrance of the Jagamohan of the Temple are worshipped.

The prescribed time is 9 A.M. This is the time for breakfast of the deities. At this time sweet popcorn (Khai) Khualadus, Coconut sweets (Kora), Ripe banana, Curd, and chipped coconuts etc. are offered as bhogas. Puja is performed in a brief manner with Pancha Upachar only.

At this time puja is performed by three Pujapandas with 16 Upachars or Sodasha Upachars. Three Pujapandas used to sit on Ratnasinhasana to worship three deities Shri Balabhadra, Subhadra, and Lord Jagannath. The Pujapanda who worships Lord Jagannath also worships Sri Devi, Bhudevi, and Sudarshan. The morning bhoga or food offered to the deities contains Rice, Kanika, Khechudi, Green leaves, Cakes etc. The local names of the Bhog are Pitha Puli, Hansakeli, Kanti, Enduri, Matha Puli, Kakatua Jhili, Bundia, Kadali Bhaja, Ada Pachedi [ginger tonic] etc.The cost of the dhoop Pujas and Ballavs are borne by the Temple Administration. Previously Raja-Superintendent of the temple born the cost of materials for preparation of Bhoga. So these Bhogas are also called “Raja Bhoga” or “Kotha Bhoga”. After Morning Dhupa or Puja the Deities change their clothes and again Puja takes places in “Bhoga Mandap”, a place behind the Garuda pillar of Jagamohan. Huge quantity of Bhogas such as Rice, Dal, Curries, Saga and Cakes of different kinds etc. are offered to the Deities. Pujapandas worship this bhog with Pancha Upacharas. The cost of Bhoga Mandap offerings are not borne by the state or Temple Administration. This bhoga is mainly prepared to meet the need of different Mathas[Monasteries] and for sale to the general public. According to the demand, Bhogamandap Puja is made twice or thrice a day i.e. after “Madhyanha Dhoop” and “Sandhya Dhup” also.

Like Sakal Dhupa, this puja is also performed with Shodasha Upachar in the afternoon. The Bhoga items are more in number than that of Morning Dhupa. One can go near to the “Ratna Simhasan” for darshan by paying special Darshan fees of Rs. 10/- after Madhyanha Dhupa and Sakal Dhupa.

If rituals have been performed in time and if time permits, the Deities retire for the afternoon.


13. Sandhya Aarati
In the evening again aaratis are performed after Madhyana Dhupa Mailam. On Ekadashi day, the deities change their clothes and wear another set after “Aarati” is over.

14. Sandhya Dhupa– 7 p.m. to 8 p.m
After “Sandhya Aarati” again Bhogas are offered to the deities in the same manner like Sakala and but this time Bhoga amount is less in quantity and number. After Puja again lamp offering is made which is called as Madhyanha Dhupa“Jaya Mangala Aarati”.
15. Mailam and Chandana lagi
After “Sandhya Dhoopa” deities change their clothes and are annointed with Sandal paste mixed with champhor, keshar and Kasturi. One can witness this ritual by paying special Darshan fees of Rs. 10/-. 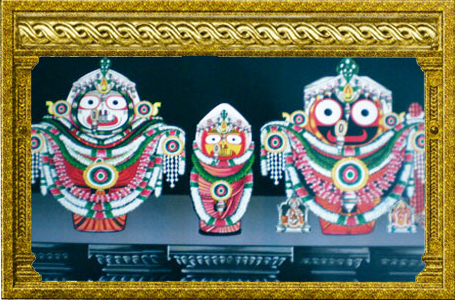 16. Badashringar Vesha
After Chandanalagi, the deities are dressed up again which is known as Badasinghara besa. This time they wear Baralagi pata (silken robes). Some portion of the Gitagovinda of Jayadeva is woven into the texture of these robes. The deities wear flower, flower garlands and floral headgear. This besa is very attractive to look at. It is worth mentioning that Jagannath Ballabha Matha supplies flower ornaments like Tilaka and Jhumpa for this besa of the deities. Similarly, the Emar Matha supplies Chandrika and Chausara, made of flowers for this besa of the deities.
17. Badashringara Bhoga
This is the last bhoga of the day offered around 11.00 P.M. at night. For this, bhoga puja is performed by the Pujapanda sevakas following the principle of Pancha upacharas, sitting on the floor down the Ratnavedi. This time the quantity of bhoga is much less and the items are Pakhala and Kanji, some fries like Kadalibada and sweets like khiri. Thereafter, the Badasinghara Dhupa Aarati is offered to the deities by the Pujapanda sevakas. 18. Khata Seja Lagi and Pahuda 12.00 the bedsteads of the deities are arranged. The Deity of “Sayan Thakura” is carried from Bhandarghar to Ratnasimhasana and place the deity near Lord Jagannath. Then follows offering of green coconut, betels and camphor aarati and then deities retire to their beds. The door is sealed then by the Sevayat ( Talichha Mohapatra) Temple is closed and no visitors or outsiders are allowed to remain inside.

This is in brief the daily rituals observed in the Temple. It is generally not possible to follow the time prescribed for each ritual on account of various practical difficulties. On the specific festive days, additional rituals are performed. As a result, changes in timings and alterations in the routine rituals are made.