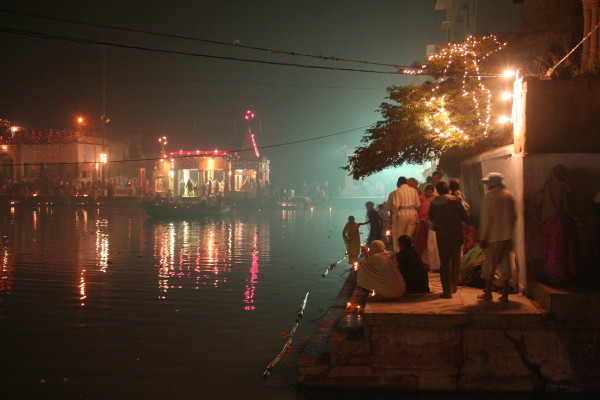 On the eighth day of the waning phase of the damodara month the appearance day of Radha Kunda is celebrated by the residents. Bathing in Radha Kunda is especially benefical on this day. By this one gains the favor of Radha, by which one gains the favor of Krsna. Radha Kunda appeared at midnight. People go to Radha Kunda and offer prasadam, garlands and pumkins (gords) into the water, then at midnight take bath in Radha Kunda and then bathe in Syama Kunda. Many people like to bathe at a ghat where Lord Nityananda's sakti, Jahnava Mata used to bathe. But wherever you go you better get there early as thousands of people/devotees will be there. And bring some warm clothing for afterwards, as it is sooooo "cooling".

The holy place known as Mathura is spiritually superior to Vaikuntha, the transcendental world, because the Lord appeared there. Superior to Mathura puri is the transcendental forest of Vrndavana because of Krsna's rasalila pastimes. And superior to the forest of Vrndavana is Goverdhana Hill, for it was raised by the divine hand of Sri Krsna and was the site of his various loving pastimes. And, above all, the superexcellent Sri Radha Kunda stands supreme, for it is overflooded with the ambrosial nectarean prema of the Lord of gokula, Sri Krsna. Where, then, is that intelligent person who is unwilling to serve this divine Radha Kunda, which is situated at the foot of Goverdhana Hill?

After killing a bull-demon named Aristasura, Krishna approached Radharani to engage in loving affairs. However, She rebuked Him, stating He was impure because of committing the sin of killing a bull, the symbol of religion. She suggested that to counteract this sin He should bathe in all the sacred rivers.

Krishna, being eager to engage in loving affairs with Srimati Radharani, immediately shoved His lotus foot into the ground, making a large hole, and called all the sacred rivers to enter into it. They appeared before Him and formed Syama-kunda (the bathing place of Syama--one who is the color of a dark rain cloud).

After bathing, Krishna stated that He had become pure by bathing in Syama-kunda, but that the gopis had become impure, having sided with a demon, even though he appeared in the form of a bull. Radharani, along with some of Her gopi friends, broke their bangles and dug a hole with the broken pieces. But there was no water - so Krishna laughed. The gopis then formed a line to the Manasi Ganga and started to fill the hole with water that was passed from one gopi to another. At that time, all the sacred rivers again arrived in person and requested permission to enter into Radharani's kunda, which they did after receiving Radharani's blessing.