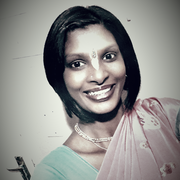 Found Srila Prabhupada's "The Science of Self Realisation" in a pile of dirt at the age of 8 in 1989, so I picked it up as it looked different, but never understood it, came in contact with a devotee in 1998, he gave me Srila Prabhupada's "Higher Taste", I liked it because of the recipe's, refused to take to Krsna consciousness though, we moved out of that area in 2000, but the same devotee came into contact with us again whilst he was distributing books, sold us the Bhagavad Gita as it is, I read 2 chapters and closed it, as I felt this book was changing me, I felt I was not ready for change, but I became a vegetarian, as I did not like meat but was forced to and the Bhagavad Gita confirmed that I don't need meat as it's not good for me. In 2003 and 2004, I relocated to the USA for a while and to the UK for a while, I used to see the devotees all the time, during that time my brothers took to Krsna consciousness, Last year I went through a lot of Calamaties, during this time I read the teachings of Kunti, I then started taking my krsna Consciousness more seriously as it made sense to me, by the grace of my Guru Maharaja HH Bhakti Caitanya swami and HG Nrsingha Prabhu, I've been fortunate enough to be give Harinaam Initiation on the 8th December 2013, best day of my life by far. Trying to be a servant

Loves to serve the devotees Prasad, loves to learn how to cook new delicacies for Sri Krsna and his devotees, loves Kirtan and sankirtan.

make devotee friends world wide, to increase my knowledge in Krsna consciousness, to keep me inspired so that I can inspire others, to help me become a better person.