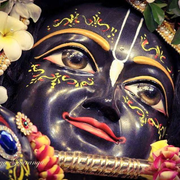 I had come to know about Dattapukur Namhatta Sangha in a program in our house. Kamalnayan Prabhu is the devotee who guided me in this movement and since then I'm a part of it and proud to be in this Satsanga.

Trying to be a humble servant of Pravupad and Lord Krisna