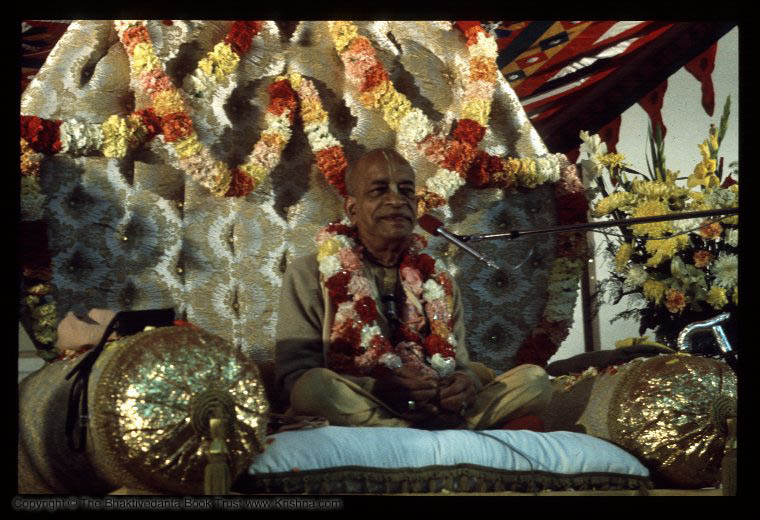 It is stated in Srila Rupa Goswami`s Krsna Namastakam, " O holy name, the tips
of the toes of your lotus feet are eternally worshipped by the glowing effulgence
of the Upanisads, the crest jewels of the Vedas. You are eternally adored and
chanted by great liberated souls like Sri Narada and Srila Sukadeva Goswami.
O Harinama, clearing myself of all offenses, I take complete shelter of You."

In the Bhakti-rasmarta-sindhu, it is stated, " The holy name of Krishna is a
transcendental wish-fulfilling gem. It bestows all spiritual benedictions, for it is
Krishna Himself. It is the personification of divine mellow, the fountainhead of
all pleasure. The holy name of Krishna is eternally liberated and spiritual.
This is because the name Krishna and Krishna Himself are nondifferent."

In the Padyavali, it is stated, " Let the all-auspicious glories of the holy name, which
benedicts the entire universe, be victorious. Just as when the sun rises, it dispels
the ocean of darkness; in the same way, when the holy name has only slightly
risen within one`s heart, all of one`s sins are completely destroyed."

In the Padyavali, it is stated, " Knowledge and yogic perfection can be compared to
one another, but prema and Krishna-nama have no comparison to anything within
this world. They cannot be weighed on the scales of worldly consideration."

In the Hari-Bhakti-Vilasa, it is stated, " O descendent of Bharata, one who has
previously worshipped Lord Vasudeva in hundreds of lifetimes
can now chant the holy name eternally."

In the Srimad Bhagavatam, it is stated, " My dear King, although Kali-yuga is an ocean
of faults, there is still one good quality about this age. Simply by chanting the
Hare Krishna maha-mantra, one can become free from material bondage
and be promoted to the transcendental Kingdom."

In the Hari-Bhakti-Vilasa, it is stated, " The remembrance of Vishnu certainly cuts sin
to pieces, but it is very difficult to attain perfection through remembering Vishnu.
Only after great effort is such remembrance possible. However, simply by moving
the lips, there is the kirtana of the holy name of Vishnu, and therefore
kirtana is the topmost process of devotional service."

In the Srimad Bhagavatam, it is stated, " O King, constant chanting of the holy name of
the Lord after the way of the great authorities is the doubtless and fearless way of
success for all, including those who are free from all material desires, those who are
desirous of all material enjoyment, and those who are self-satisfied
by dint of transcendental knowledge."

In the Sri Caitanya Bhagavata, it is stated, " The animals, birds and insects cannot chant
the holy name, but by hearing the holy name chanted, they can benefit. Chanting the japa
of the holy name of Krishna purifies oneself, but the loud sankirtana of the holy name
of Krishna benefits all living beings."

In the Hari-Bhakti-Vilasa, it is stated, " The holy name of Krishna is the sweetest of the sweet
and the most auspicious of all auspicious things. It is the self-effulgent and beautiful fruit of
the Vedic desire tree. O best of the Bhrgus, when the holy name is uttered once without
offense, either attentively or inattentively, it immediately ensures the deliverance of
all human beings from the bondage of illusion."

In the Srimad Bhagavatam, it is stated, " Those who are intoxicated by false ego on account of
their good birth, wealth, learning and beauty, cannot cry out Your name with sincere feeling.
Only those who are materially bereft can chant Your name in purity."

In the Upadeshamrta, it is stated, " The holy name, character, pastimes and activities of Krishna
are all transcendentally sweet like sugar candy. Although the tongue of one afflicted by
the jaundice of ignorance cannot taste anything sweet; it is wonderful that simply by carefully
chanting these sweet names every day, a natural relish awakens within the tongue,
and his disease is gradually destroyed at the root."

It is stated in the Bhakti-rasamrta-sindhu, " The material senses cannot appreciate the holy name
of Krishna, or His form, qualities and pastimes. When a conditioned soul is awakened to Krishna
consciousness and renders service by using his tongue to chant the holy name of the Lord and
taste the remnants of the Lord`s food, the tongue is purified, and one gradually comes to
understand who Krishna really is. In other words, the holy name of Krishna can never be grasped
by the material senses. Only by rendering devotional service, beginning with vibrating the
Lord`s glories upon the tongue, one can realize Krishna,
for He will reveal Himself directly to the sincere soul."

In the Srimad Bhagavatam, it is stated, " Authorities who are learned scholars and sages have
carefully ascertained that one should atone for the heaviest sins by undergoing a heavy process
of atonement and one should atone for lighter sins by undergoing lighter atonement.
Chanting the Hare Krishna mantra, however, vanquishes all the effects of sinful activities,
regardless of whether heavy or light."