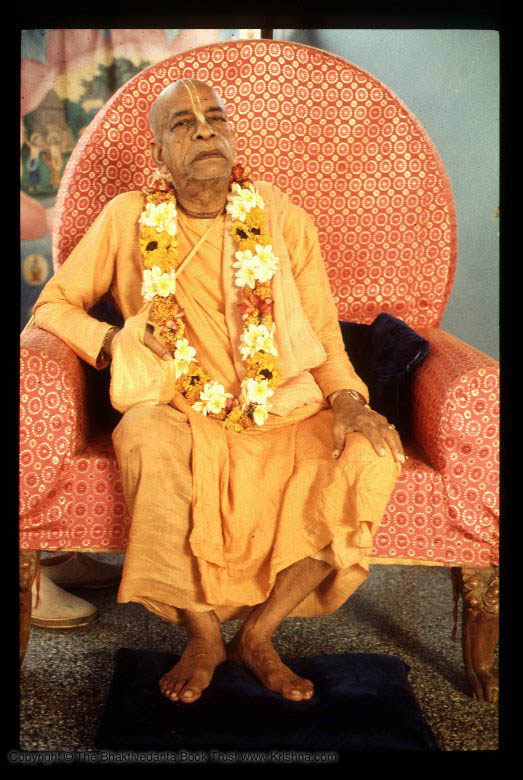 In the Padma Purana, it is stated, " Even if in the beginning
one chants the holy name with offenses, one will become
free from such offenses by chanting again and again."

In Shri Krishna-Namashtaka, it is stated, " O holy name of
Krishna! You are the life force of Shri Narada`s veena and
You are constantly increasing the sweetness of the delightful
waves in the ocean of nectar. Out of Your causeless mercy,
kindly appear on my tongue incessantly and bestow me
with unalloyed affection to the Lord."

In Shri Krishna-Namashtaka, it is stated," O illuminating sun
of the holy name of Krishna! If any person by his chanting
can even obtain a mere shadow of Your splendour, then
You dissipate the gloom of nescience that drags him into
the darkness of the material world. You reward even the
blind fools who are bereft of any spiritual knowledge with
the vision that enables them to take up devotional service.
Therefore, O Shri harinama, who in this world is able to
properly describe Your glories?"

In the Garuda Purana, it is stated, " If one chants the holy
name of the Lord, even in a helpless condition, all the
reactions of his sinful life depart, just as when a lion roars,
all the small animals flee in fear."

In Shri-Krishna-Namashtaka, it is stated, " O holy name! You
appear in two forms: the Deity form of the Supreme Lord,
and Your transcendental name. Of these two, we consider
the form of the holy syllables to be infinitely more
compassionate than the form of the Deity. Because if a
person haven taken shelter of the Deity form commits
offenses, the only recourse he has, is to become the servant
of the holy name and chant incessantly Krishna, Govinda and
so on. By Your immeasurable transcendental potency, all his
offenses disappear and he experiences uninterrupted joy,
submerged in an ocean of ecstasy."

In the Padma Purana, it is stated, " The Holy name of Krishna
is transcendentally blissful. It bestows all spiritual benedictions,
for it is Krishna Himself, the reservoir of all transcendental
mellows. It is not a material name under any condition, and it
is as powerful as Krishna Himself. Since the holy name of
Krishna is not contaminated by the material qualities, there is
no question of its being involved with maya. The holy name of
Krishna is always liberated and spiritual. It is never conditioned
by the laws of material nature This is because the holy name
of Krishna and krishna Himself are identical."

In the Garuda Purana, it is stated, " O best of Kings, if you want
to achieve the highest knowledge by which you may attain the
supreme abode, then perform Govinda Kirtanam with firm faith."

In the Brhad-Bhagavatamrta, it is stated, " All glories, all glories
to the all blissful holy name of Lord Krishna, which causes the
devotee to give up all conventional religious duties, meditation
and worship. When somehow or other uttered even once by a
living entity, the holy name awards him liberation. The holy
name of Krishna is the highest nectar. It is my very life
and my only treasure."

In Shri Krishna-Namashtaka, it is stated, " O holy name! You
destroy the entirety of the sufferings of Your surrendered
devotees. You are eternally manifest in the transcendental
form of intensified bliss. To the residents of Gokula, You are
the source of unending festival of joy and divine pleasure,
and You are always saturated in Your magnificent glory and
sweetness. I offer my repeated obeisances unto Your lotus feet."

In the Padma Purana, it is stated, " If a devotee once utters the
holy name of the Lord, or if it penetrates his mind or enters
his ear, which is the channel of aural reception, that holy name
will certainly deliver him from material bondage, whether vibrated
properly or improperly, with correct or incorrect grammar, and
properly joined or vibrated in separated parts. O brahmana, the
potency of the holy name is therefore certainly great. However, if
one uses the vibration of the holy name for the benefit of the
material body, for material wealth and followers, or under the
influence of greed and atheism; in other words, if one utters the
holy name with offenses; such chanting will not produce the
desired result very soon. Therefore, one should diligently
avoid offenses in chanting the holy name of the Lord."

In the Adi Purana, it is stated, " There is no vow like chanting the
holy name; no knowledge superior to it; no meditation which
comes anywhere near it; and it gives the highest result. No
penance is equal to it, and nothing is as potent or powerful as
the holy name. Chanting the holy name of the Lord is the greatest
act of piety and the supreme refuge. Even the words of the Vedas
do not possess sufficient power to describe its magnitude.
Chanting the holy name of the Lord is the highest path to
liberation, peace and eternity. It is the pinnacle of devotion.
It is the natural inclination and joyous attraction of the heart.
It is the best form of remembrance of the Supreme Lord.
The holy name has appeared solely for the benefit of the living
entities as their Lord and master; their supreme worshippable
object and their spiritual guide and mentor."

In Shri Krishna-Namashtaka, it is stated, " O Shri Harinama!
The entire galaxy of Upanishads, which are like a necklace of
most precious gems, are serving the toenails of Your lotus feet
with their brilliance. In such a way, the Vedic scriptures are
constantly glorifying Your lotus feet. Great Yogis, sages and
liberated transcendentalists are engaging in worshipping You.
Therefore I fully surrender unto You and
humbly pray for Your shelter."