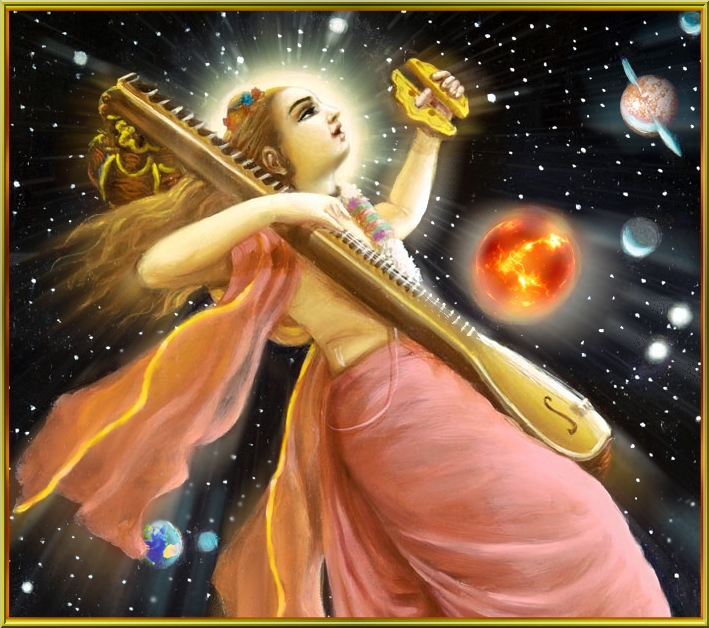 Nārada Muni is always glorifying the pastimes of the Lord. In this verse we see that not only does he glorify the Lord, but he also likes to glorify the devotees of the Lord. The great sage Nārada's mission is to broadcast the devotional service of the Lord. For this purpose he has compiled the Nārada-pañcarātra, a directory of devotional service, so that devotees can always take information about how to execute devotional service and thus engage twenty-four hours a day in performing sacrifices for the pleasure of the Supreme Personality of Godhead. As stated in the Bhagavad-gītā, the Lord has created four orders of social life, namely brāhmaṇa, kṣatriya, vaiśya and śūdra. In the Nārada-pañcarātra it is very clearly described how each of the social orders can please the Supreme Lord. In the Bhagavad-gītā (18.45) it is stated, sve sve karmaṇy abhirataḥ saṁsiddhiṁ labhate naraḥ: by executing one's prescribed duties one can please the Supreme Lord. In the Śrīmad-Bhāgavatam (1.2.13) also it is stated, svanuṣṭhitasya dharmasya saṁsiddhir hari-toṣaṇam: the perfection of duty is to see that by discharging one's specific duties one satisfies the Supreme Personality of Godhead. When the Pracetās were performing sacrifices according to this direction, Nārada Muni was satisfied to see these activities, and he also wanted to glorify Dhruva Mahārāja in that sacrificial arena.
(SRIMAD BHAGAVATAM-------4:13:4-------PURPORT).

The Haryaśvas, the sons of Prajāpati Dakṣa, were certainly well behaved, learned and advanced, and in accordance with the order of their father they went to perform austerities to beget good sons for their family. But Nārada Muni took advantage of their good behavior and culture to properly direct them not to be involved with this material world, but to use their culture and knowledge to end their material affairs. The Haryaśvas abided by the order of Nārada Muni, but when news of this was brought to Prajāpati Dakṣa, the prajāpati, instead of being happy with the actions of Nārada Muni, was extremely sorrowful. Similarly, we are trying to bring as many young men as possible to the Kṛṣṇa consciousness movement for their ultimate benefit, but the parents of the young men joining this movement, being very sorry, are lamenting and making counterpropaganda. Of course, Prajāpati Dakṣa did not make propaganda against Nārada Muni, but later, as we shall see, Dakṣa cursed Nārada Muni for his benevolent activities. This is the way of materialistic life. A materialistic father and mother want to engage their sons in begetting children, striving for improved economic conditions and rotting in materialistic life. They are not unhappy when their children become spoiled, useless citizens, but they lament when they join the Kṛṣṇa consciousness movement to achieve the ultimate goal of life. This animosity between parents and the Kṛṣṇa consciousness movement has existed since time immemorial. Even Nārada Muni was condemned, not to speak of others. Nevertheless, Nārada Muni never gives up his mission. To deliver as many fallen souls as possible, he continues playing his musical instrument and vibrating the transcendental sound Hare Kṛṣṇa, Hare Kṛṣṇa, Kṛṣṇa Kṛṣṇa, Hare Hare/ Hare Rāma, Hare Rāma, Rāma Rāma, Hare Hare.
(SRIMAD BHAGAVATAM-------6:5:23-------PURPORT).

Nārada Muni is generally known as deva-darśana, which means that he can be seen only by demigods or persons on the same level with the demigods. But Nārada visited Kaṁsa, who was not at all on the level of the demigods, and allowed Kaṁsa to see him. Of course, Kaṁsa also saw Kṛṣṇa, what to speak of Nārada Muni. But unless one sees the Lord or His devotees with purified eyes, one cannot derive the actual benefit. Of course, anyone who associates with a pure devotee derives imperceptible benefit, which is called ajñāta-sukṛti. One cannot understand how he is making progress, yet he makes progress by seeing the devotee of the Lord. Nārada Muni's mission was to finish things quickly. Kṛṣṇa appeared in order to kill the demons, and Kaṁsa was the chief among them. Nārada wanted to expedite things; therefore, he immediately approached Kaṁsa with all the real information.
(KRSNA BOOK).

Tags: ‏, is, mission, muni, narada, of, q, shri, the, what
Email me when people reply –
Follow