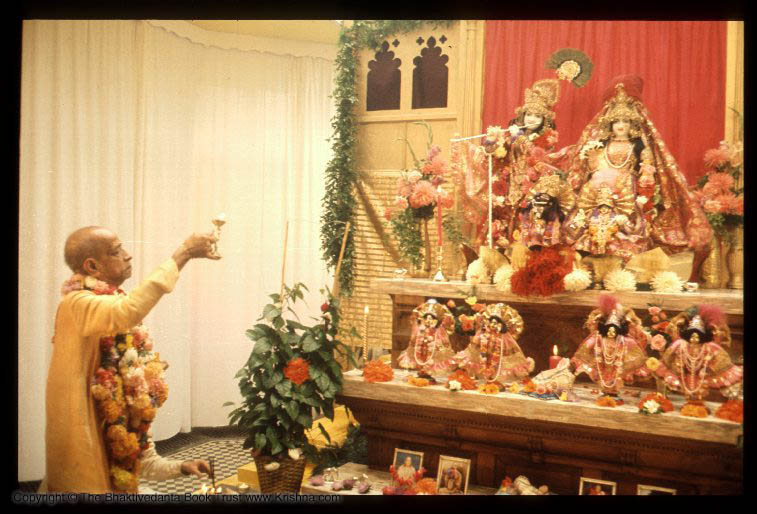 Lord Śrī Kṛṣṇa was invited by Mahārāja Yudhiṣṭhira to look into the supervision of the performances of yajña, and the Lord, to abide by the orders of His elderly cousin, caused the performance of yajñas by learned twice-born brāhmaṇas. Simply taking birth in the family of a brāhmaṇa does not make one qualified to perform yajñas. One must be twice-born by proper training and initiation from the bona fide ācārya. The once-born scions of brāhmaṇa families are equal with the once-born śūdras, and such brahma-bandhus, or unqualified once-born scions, must be rejected for any purpose of religious or Vedic function. Lord Śrī Kṛṣṇa was entrusted to look after this arrangement, and perfect as He is, He caused the yajñas to be performed by the bona fide twice-born brāhmaṇas for successful execution.
(SRIMAD BHAGAVATAM------1:12:35-------PURPORT).

In this Hari-bhakti-vilāsa Śrī Sanātana Gosvāmī gives definite instructions that by proper initiation by a bona fide spiritual master one can immediately become a brāhmaṇa. In this connection he says:
yathā kāñcanatāṁ yāti kāṁsyaṁ rasa-vidhānataḥ
tathā dīkṣā-vidhānena dvijatvaṁ jāyate nṛṇām
"As bell metal is turned to gold when mixed with mercury in an alchemical process, so one who is properly trained and initiated by a bona fide spiritual master immediately becomes a brāhmaṇa." Sometimes those born in brāhmaṇa families protest this, but they have no strong arguments against this principle. By the grace of Kṛṣṇa and His devotee, one's life can change. This is confirmed in Śrīmad-Bhāgavatam by the words jahāti bandham and śudhyanti. Jahāti bandham indicates that a living entity is conditioned by a particular type of body. The body is certainly an impediment, but one who associates with a pure devotee and follows his instructions can avoid this impediment and become a regular brāhmaṇa by initiation under his strict guidance. Śrīla Jīva Gosvāmī states how a non-brāhmaṇa can be turned into a brāhmaṇa by the association of a pure devotee. Prabhaviṣṇave namaḥ: Lord Viṣṇu is so powerful that He can do anything He likes. Therefore it is not difficult for Viṣṇu to change the body of a devotee who is under the guidance of a pure devotee of the Lord.

Although Balarāma and Kṛṣṇa are transcendental personalities, They strictly followed the regulative principles. They were initiated by Their family priest, Gargācārya, usually known as Garga Muni, the ācārya of the Yadu dynasty. According to Vedic culture, every respectable family has an ācārya, or spiritual master. One is not considered a perfectly cultured man without being initiated and trained by an ācārya. It is said, therefore, that one who has approached an ācārya is actually in perfect knowledge. Lord Kṛṣṇa and Lord Balarāma are the Supreme Personality of Godhead, the master of all education and knowledge. There was no need for Them to accept a spiritual master, or ācārya, yet for the instruction of ordinary men They also accepted a spiritual master for advancement in spiritual knowledge.
It is customary, after being initiated in the Gāyatrī mantra, for one to live away from home for some time under the care of the ācārya, to be trained in spiritual life. During this period, one has to work under the spiritual master as an ordinary menial servant. There are many rules and regulations for a brahmacārī living under the care of an ācārya, and Kṛṣṇa and Balarāma strictly followed those regulative principles while living under the instruction of their spiritual master, Sāndīpani Muni, who was a resident of Avantīpura, in the northern Indian district of Ujjain.

If one wants to go to the higher material planets, he can keep his finer dress of mind, intelligence and ego, but has to leave his gross dress (body) made of earth, water, fire, etc. When one goes to a transcendental planet, however, it is necessary to change both the finer and gross bodies, for one has to reach the spiritual sky completely in a spiritual form. This change of dress will take place automatically at the time of death if one so desires. But this desire is possible at death only if the desire is cultivated during life. Where one's treasures are, there also is one's heart. When one practices devotional service, one cultivates a desire for the kingdom of God. The following details outline a general practice by which one can prepare himself for an easy journey to the Vaikuṇṭha (antimaterial) planets, where life is free from birth, old age, disease and death.
General practice (positive functions):

1. The serious candidate must accept a bona fide spiritual master in order to be trained scientifically. Because the senses are material, it is not at all possible to realize the Transcendence by them. Therefore the senses have to be spiritualized by the prescribed method under the direction of the spiritual master.

2. When the student has chosen a bona fide spiritual master, he must take the proper initiation from him. This marks the beginning of spiritual training.

3. The candidate must be prepared to satisfy the spiritual master in every way. A bona fide spiritual master who is fully cognizant of the methods of spiritual science, learned in the spiritual scriptures such as the Bhagavad-gītā, Vedānta, Śrīmad-Bhāgavatam and Upaniṣads, and who is also a realized soul who has made a tangible connection with the Supreme Lord, is the transparent medium by which the willing candidate is led to the path of the Vaikuṇṭhas. The spiritual master must be satisfied in all respects, because simply by his good wishes a candidate can make wonderful progress along the path.

(EASY JOURNEY TO OTHER PLANETS).

We have actual experience that many karmīs and others come to the Society and find a very pleasing and peaceful atmosphere in the temples of ISKCON. In this verse the word dvi janmanām means "of the twice-born." Anyone can join the International Society for Krishna Consciousness and be initiated to become twice-born. As recommended by Sanātana Gosvāmī, by the process of initiation and authorized training, any man can become twice-born. The first birth is made possible by the parents, and the second birth is made possible by the spiritual father and Vedic knowledge. Unless one is twice-born one cannot understand the transcendental characteristics of the Lord and His devotees. Study of the Vedas is therefore forbidden for śūdras. Simply by academic qualifications a śūdra cannot understand the transcendental science. At the present moment, throughout the entire world the educational system is geared to produce śūdras. A big technologist is no more than a big śūdra. Kalau śūdra-sambhavaḥ: in the age of Kali, everyone is a śūdra. Because the whole population of the world consists only of śūdras, there is a decline of spiritual knowledge, and people are unhappy. The Kṛṣṇa consciousness movement has been started especially to create qualified brāhmaṇas to broadcast spiritual knowledge all over the world, for thus people may become very happy.
(SRIMAD BHAGAVATAM------4:12:48-------PURPORT).

Sanātana Gosvāmī wrote his Vaiṣṇava smṛti, Hari-bhakti-vilāsa, which was specifically meant for India. In those days, India was more or less following the principle of smārta-vidhi. Śrīla Sanātana Gosvāmī had to keep pace with this, and his Hari-bhakti-vilāsa was compiled with this in mind. According to smārta-brāhmaṇas, a person not born in a brāhmaṇa family could not be elevated to the position of a brāhmaṇa. Sanātana Gosvāmī, however, says in the Hari-bhakti-vilāsa (2.12) that anyone can be elevated to the position of a brāhmaṇa by the process of initiation.
yathā kāñcanatāṁ yāti kāṁsyaṁ rasa-vidhānataḥ
tathā dīkṣā-vidhānena dvijatvaṁ jāyate nṛṇām
"As bell metal is turned to gold when mixed with mercury in an alchemical process, so one who is properly trained and initiated by a bona fide spiritual master immediately becomes a brāhmaṇa."

There is a difference between the smārta process and the gosvāmī process. According to the smārta process, one cannot be accepted as a brāhmaṇa unless he is born in a brāhmaṇa family. According to the gosvāmī process, the Hari-bhakti-vilāsa and the Nārada-pañcarātra, anyone can be a brāhmaṇa if he is properly initiated by a bona fide spiritual master. This is also the verdict of Śukadeva Gosvāmī in Śrīmad-Bhāgavatam (2.4.18):

A brāhmaṇa must be a Vaiṣṇava and a learned scholar. Therefore in India it is customary to address a brāhmaṇa as paṇḍita. Without knowledge of Brahman, one cannot understand the Supreme Personality of Godhead. Therefore a Vaiṣṇava is already a brāhmaṇa, whereas a brāhmaṇa may become a Vaiṣṇava. In the Garuḍa Purāṇa it is said:
bhaktir aṣṭa-vidhā hy eṣā yasmin mlecche "pi vartate
sa viprendro muni-śreṣṭhaḥ sa jñānī sa ca paṇḍitaḥ
"Even if one is born a mleccha, if he becomes a devotee he is to be considered the best of the brāhmaṇas and a learned paṇḍita."

yathā kāñcanatāṁ yāti kāṁsyaṁ rasa-vidhānataḥ
tathā dīkṣā-vidhānena dvijatvaṁ jāyate nṛṇām
"As bell metal is turned to gold when mixed with mercury in an alchemical process, so one who is properly trained and initiated by a bona fide spiritual master becomes a brāhmaṇa immediately." All this evidence found in the revealed scriptures proves that according to the Vedic version, a Vaiṣṇava is never to be considered an abrāhmaṇa, or non-brāhmaṇa. A Vaiṣṇava should not be thought to belong to a lower caste even if born in a mleccha or yavana family. Because he has become a devotee of Lord Kṛṣṇa, he has become purified and has attained the stage of brāhmaṇa (dvijatvaṁ jāyate nṛṇām).

Tags: ‏, acharya, and, bona, fide, from, importance, initiation, is, of
Email me when people reply –
Follow