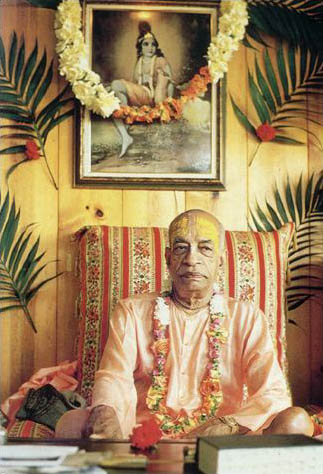 In the beginning, no one can be elevated to the highest stage of devotional service. Here bhakta means one who does not hesitate to accept the reformatory processes for becoming a bhakta. In order to become a devotee of the Lord, one has to accept a spiritual master and inquire from him about how to progress in devotional service. To serve a devotee, to chant the holy name according to a certain counting method, to worship the Deity, to hear Śrīmad-Bhāgavatam or Bhagavad-gītā from a realized person and to live in a sacred place where devotional service is not disturbed are the first out of sixty-four devotional activities for making progress in devotional service. One who has accepted these five chief activities is called a devotee.
(SRIMAD BHAGAVATAM-------3:32:42--------PURPORT).

The Lord, being full and free from problems, can wholeheartedly care for His devotees. His concern is how to elevate and protect all those who have taken shelter at His feet. The same responsibility is also entrusted to the spiritual master. The bona fide spiritual master's concern is how the devotees who have surrendered to him as a representative of the Lord may make progress in devotional service. The Supreme Personality of Godhead is always mindful of the devotees who fully engage in cultivating knowledge of Him, having taken shelter at His lotus feet.
(SRI CAITANYA CARITAMRTA-------1:1:62-------PURPORT).

This bhāva stage is attained after one has transcendental affection for the Lord. The first initial stage is called śraddhā, or a liking for the Supreme Lord, and in order to increase that liking one has to associate with pure devotees of the Lord. The third stage is to practice the prescribed rules and regulations of devotional service. This will dissipate all sorts of misgivings and remove all personal deficiencies that hamper progress in devotional service.
(SRIMAD BHAGAVATAM-------1:16:16--------PURPORT).

Those who are neophytes or even a little progressed in devotional service should not try to imitate the mahā-bhāgavata. Rather, they should only follow in his footsteps. The word anukara means "imitating," and anusara means "trying to follow in the footsteps." We should not try to imitate the activities of a mahā-bhāgavata or Śrī Caitanya Mahāprabhu. Our best efforts should be exerted in trying to follow them according to our ability. The mahā-bhāgavata's heart is completely freed from material contamination, and he can become very dear even to fierce animals like tigers and elephants. Indeed, the mahā-bhāgavata treats them as his very intimate friends. On this platform there is no question of envy.
(SRI CAITANYA CARITAMRTA-------2:17:31-------PURPORT).

Pṛthu Mahārāja has explained in the previous verse the importance of devotional service for both the rulers and the citizens of the state. Now he explains how one can be steadily fixed in devotional service. Śrī Caitanya Mahāprabhu, while instructing Śrīla Rūpa Gosvāmī, has compared the devotional service of the Lord with a creeper. A creeper has a feeble stem and requires the support of another tree to grow, and while growing, it requires sufficient protection so that it may not be lost. While describing the system of protection for the creeper of devotional service, Śrī Caitanya Mahāprabhu has especially stressed protection from offenses unto the lotus feet of Vaiṣṇavas. Such offenses are called vaiṣṇava-aparādha. Aparādha means "offense." If one commits vaiṣṇava-aparādhas, all of his progress in devotional service will be checked. Even though one is very much advanced in devotional service, if he commits offenses at the feet of a Vaiṣṇava, his advancement is all spoiled. In the śāstras it is found that a very great yogī, Durvāsā Muni, committed a vaiṣṇava-aparādha and thus for one full year had to travel all over the universe, even to Vaikuṇṭhaloka, to defend himself from the offense. At last, even when he approached the Supreme Personality of Godhead in Vaikuṇṭha, he was refused protection. Therefore one should be very careful about committing offenses at the feet of a Vaiṣṇava. The most grievous type of vaiṣṇava-aparādha is called gurv-aparādha, which refers to offenses at the lotus feet of the spiritual master. In the chanting of the holy name of the Supreme Personality of Godhead, this gurv-aparādha is considered the most grievous offense. Guror avajñā śruti-śāstra-nindanam (Padma Purāṇa). Among the ten offenses committed against the chanting of the holy name, the first offenses are disobedience of the spiritual master and blasphemy of the Vedic literature.
(SRIMAD BHAGAVATAM-------4:21:37--------PURPORT).

Cheating and hypocrisy are not tolerated by higher authorities. If one understands what sin is, he should give it up with sincerity and regret and surrender unto the lotus feet of the Supreme Personality of Godhead through His agent, the pure devotee. In this way, one can be freed from the reactions of sin and make progress in devotional service. However, if one continues committing sins after making some atonement, he will not be saved. In the śāstras, such atonement is compared to an elephant's bathing. An elephant takes a very good bath and cleanses its body very nicely, but as soon as it comes out of the water, it picks up some dust on the shore and throws it all over its body. Atonement may be carried out very nicely, but it will not help a person if he continues committing sins.
(SRI CAITANYA CARITAMRTA-------2:24:253-------PURPORT).

Sometimes it is found that a neophyte is taking part in chanting and dancing very enthusiastically, but within himself he is under the impression that he has become one with the supreme whole. This conception of monism is completely different from pure, transcendental devotional service. If, however, it is seen that a person has developed a high standard of devotion without having undergone even the regulative principles, it is to be understood that his status of devotional service was achieved in a former life. For some reason or another it had been temporarily stopped, most probably by an offense committed at the lotus feet of a devotee. Now, with a good second chance, it has again begun to develop. The conclusion is that steady progress in devotional service can be attained only in the association of pure devotees.
(NECTAR OF DEVOTION).

In the Nāradīya Purāṇa it is directed, "One should not accept more than necessary if he is serious about discharging devotional service." The purport is that one should not neglect following the principles of devotional service, nor should one accept the rulings of devotional service which are more than what he can easily perform. For example, it may be said that one should chant the Hare Kṛṣṇa mantra at least one hundred thousand times daily on his beads. But if this is not possible, then one must minimize his chanting according to his own capacity. Generally, we recommend our disciples to chant at least sixteen rounds on their japa beads daily, and this should be completed. But if one is not even able to chant sixteen rounds, then he must make it up the next day. He must be sure to keep his vow. If he does not strictly follow this out, then he is sure to be negligent. That is offensive in the service of the Lord. If we encourage offenses, we shall not be able to make progress in devotional service. It is better if one fixes up a regulative principle according to his own ability and then follows that vow without fail. That will make him advanced in spiritual life.
(NECTAR OF DEVOTION).

Unless one is fully situated in unalloyed devotional service, there is no guarantee of liberation, even if one is elevated to the heavenly planets or to the impersonal Brahman effulgence. A devotee's achievement, however, is never lost by the influence of time. Even if a devotee cannot completely execute devotional service, in his next life he begins from the point where he left off. Such an opportunity is not given to the karmīs and jñānīs, whose achievements are destroyed. The bhakta's achievement is never destroyed, for it goes on perpetually, be it complete or incomplete. This is the verdict of all Vedic literatures. Śucīnāṁ śrīmatāṁ gehe yoga-bhraṣṭo'bhijāyate (B.G.6:41). If one is unable to complete the process of bhakti-yoga, he is given a chance in his next life to take birth in a pure family of devotees or in a rich family. In such families a person can have a good opportunity to further progress in devotional service.
(SRIMAD BHAGAVATAM-------4:24:56--------PURPORT).

The scripture known as Brahma-yāmala states as follows: "If someone wants to pose himself as a great devotee without following the authorities of the revealed scriptures, then his activities will never help him to make progress in devotional service. Instead, he will simply create disturbances for the sincere students of devotional service." Those who do not strictly follow the principles of revealed scriptures are generally called sahajiyās—those who have imagined everything to be cheap, who have their own concocted ideas, and who do not follow the scriptural injunctions. Such persons are simply creating disturbances in the discharge of devotional service.
(NECTAR OF DEVOTION).

"I am seated in everyone's heart, and from Me come remembrance, knowledge and forgetfulness." The Lord is present in everyone's heart, and He gives the living entity intelligence. According to the desires of the living entity, the Lord makes him remember or forget. If the living entity is demoniac and wants to forget the Supreme Personality of Godhead, the Lord gives him the intelligence to be able to forget the Supreme Lord forever. Similarly, when a devotee wants to serve the Supreme Lord, the Lord, as Paramātmā, gives the devotee the intelligence to make progress in devotional service. The Lord directly witnesses our activities and experiences our desires. The Supreme Lord gives us the facilities to act in the way we wish.
(SRIMAD BHAGAVATAM-------4:30:26--------PURPORT).

When a devotee is never tired of executing devotional service and is always engaged in Kṛṣṇa conscious activities, constantly relishing the transcendental mellows in relationship with Kṛṣṇa, he is called perfect. This perfectional stage can be achieved in two ways: one may achieve this stage of perfection by gradual progress in devotional service, or one may become perfect by the causeless mercy of Kṛṣṇa, even though he has not executed all the details of devotional service.
(NECTAR OF DEVOTION).

Tags: ‏, devotional, how, in, make, progress, q, service, to
Email me when people reply –
Follow