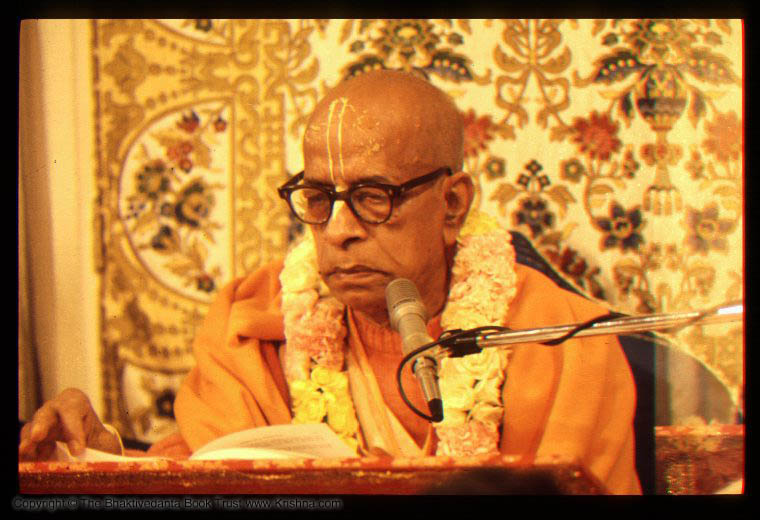 There are different kinds of mystic yoga systems aiming for different phases of the Absolute Truth. The jñāna-yoga system aims at the impersonal Brahman effulgence, and the haṭha-yoga system aims at the localized personal aspect, the Paramātmā feature of the Absolute Truth, whereas bhakti-yoga, or devotional service, which is executed in nine different ways, headed by hearing and chanting, aims at complete realization of the Supreme Lord. There are different methods of self-realization. But here Devahūti especially refers to the bhakti-yoga system, which has already been primarily explained by the Lord. The different parts of the bhakti-yoga system are hearing, chanting, remembering, offering prayers, worshiping the Lord in the temple, accepting service to Him, carrying out His orders, making friendship with Him and ultimately surrendering everything for the service of the Lord. The word nirvāṇātman is very significant in this verse. Unless one accepts the process of devotional service, one cannot end the continuation of material existence. As far as jñānīs are concerned, they are interested in jñāna-yoga, but even if one elevates oneself, after a great performance of austerity, to the Brahman effulgence, there is a chance of falling down again to the material world. Therefore, jñāna-yoga does not actually end material existence. Similarly, regarding the haṭha-yoga system, which aims at the localized aspect of the Lord, Paramātmā, it has been experienced that many yogīs, such as Viśvāmitra, fall down. But bhakti-yogīs, once approaching the Supreme Personality of Godhead, never come back to this material world, as it is confirmed in the Bhagavad-gītā.

In this verse the words pare amale are significant. The realization of Brahman is explained in Śrīmad-Bhāgavatam. The Absolute Truth is realized in three phases—impersonal effulgence (Brahman), localized Paramātmā and the Supreme Personality of Godhead, Bhagavān. In his prayers, Lord Śiva concentrated upon the personal features of Parabrahman, described in personal terms as snigdha-prāvṛḍ-ghana-śyāmam (S B. 4:24:45). Following the instructions of Lord Śiva, the Pracetās also concentrated their minds on the Śyāmasundara form of the Supreme Brahman. Although impersonal Brahman, Paramātmā Brahman and Brahman as the Supreme Person are all on the same transcendental platform, the personal feature of the Supreme Brahman is the ultimate goal and last word in transcendence.

In this verse the word yoga-sāṅkhyayoḥ is very important. Yoga means bhakti-yoga because yogīs also accept the existence of the all-pervading Supreme Soul and try to see that Supreme Soul within their hearts. As stated in Śrīmad-Bhāgavatam (12.13.1), dhyānāvasthita-tad-gatena manasā paśyanti yaṁ yoginaḥ. The devotee tries to come directly in touch with the Supreme Personality of Godhead, whereas the yogī tries to find the Supersoul within the heart by meditation. Thus, both directly and indirectly, yoga means bhakti-yoga. Sāṅkhya, however, means physical study of the cosmic situation through speculative knowledge. This is generally known as jñāna-śāstra. The Sāṅkhyites are attached to the impersonal Brahman, but the Absolute Truth is known in three ways. Brahmeti paramātmeti bhagavān iti śabdyate: (S.B.1:2:11) the Absolute Truth is one, but some accept Him as impersonal Brahman, some as the Supersoul existing everywhere, and some as Bhagavān, the Supreme Personality of Godhead. The central point is the Absolute Truth.

The Absolute Truth is realized in three phases—impersonal Brahman, Paramātmā and the Supreme Personality of Godhead, Bhagavān. All of these are one and the same truth, but Brahman, Paramātmā and Bhagavān constitute three different features. Whoever understands Brahman is called a brāhmaṇa, and when a brāhmaṇa engages in the Lord's devotional service, he is called a Vaiṣṇava. Unless one comes to understand the Supreme Personality of Godhead, his realization of impersonal Brahman is imperfect. A brāhmaṇa can chant the Hare Kṛṣṇa mantra on the platform of nāmābhāsa, but not on the platform of pure vibration. When a brāhmaṇa engages in the Lord's service, fully understanding his eternal relationship, his devotional service is called abhidheya. When one attains that stage, he is called a bhāgavata, or Vaiṣṇava. This indicates that he is free from contamination and material attachment.

The Absolute Truth is realized in three phases-as Brahman, Paramātmā and Bhagavān. Bhagavān is the origin of everything. Brahman is a partial representation of Bhagavān, and Vāsudeva, the Supersoul living everywhere and in everyone's heart, is also an advanced realization of the Supreme Personality of Godhead. But when one comes to understand the Supreme Personality of Godhead (vāsudevaḥ sarvam iti), when one realizes that Vāsudeva is both Paramātmā and the impersonal Brahman, he is then in perfect knowledge. Kṛṣṇa is therefore described by Arjuna as paraṁ brahma paraṁ dhāma pavitraṁ paramaṁ bhavān (B.G.10:12). The words paraṁ brahma refer to the shelter of the impersonal Brahman and also of the all-pervading Supersoul. When Kṛṣṇa says tyaktvā dehaṁ punar janma naiti mām eti (B.G.4:9), this means that the perfect devotee, after perfect realization, returns home, back to Godhead. Mahārāja Khaṭvāṅga accepted the shelter of the Supreme Personality of Godhead, and because of his full surrender he achieved perfection.

Tags: ‏, absolute, how, is, q, realized, the, truth
Email me when people reply –
Follow