Q. 227. WHAT IS THE PERFECTION OF DEVOTIONAL SERVICE ?‏ 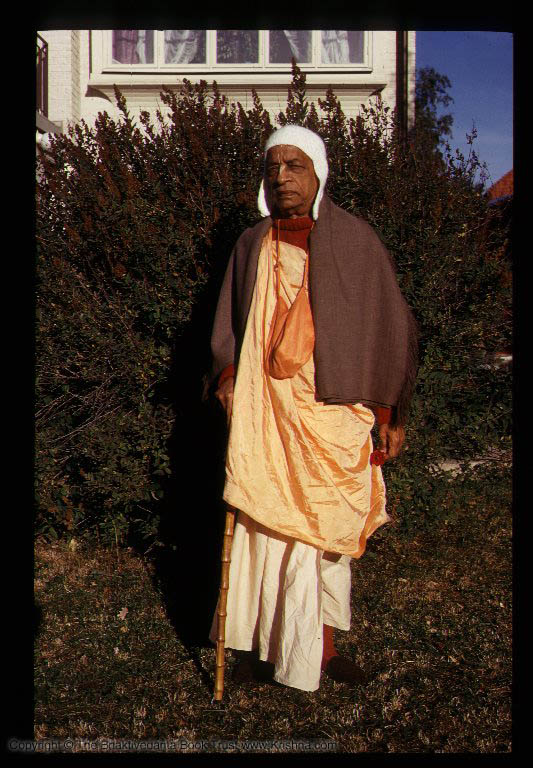 The perfectional stage begins with activity in the self-realized position, and that activity is based on the understanding that a living entity is eternally the subordinate servitor of the Supreme Lord. Otherwise, there is no meaning to self-realization.

If one is puffed up with the idea that he is the Supreme Brahman, or that he has become one with Nārāyaṇa, or that he has merged into the brahmajyoti effulgence, then he has not grasped the perfection of life. As the Śrīmad-Bhāgavatam (10.2.32) states,

SYNONYMS
ye anye — anyone, or all others; aravinda-akṣa — O lotus-eyed one; vimukta-māninaḥ — falsely considering themselves free from the bondage of material contamination; tvayi — unto You; asta-bhāvāt — speculating in various ways but not knowing or desiring more information of Your lotus feet;aviśuddha-buddhayaḥ — whose intelligence is still not purified and who do not know the goal of life; āruhya — even though achieving; kṛcchreṇa — by undergoing severe austerities, penances and hard labor; param padam — the highest position (according to their imagination and speculation); tataḥ — from that position; patanti — they fall; adhaḥ — down into material existence again; anādṛta — neglecting devotion to; yuṣmat — Your; ańghrayaḥ — lotus feet.

TRANSLATION
[Someone may say that aside from devotees, who always seek shelter at the Lord's lotus feet, there are those who are not devotees but who have accepted different processes for attaining salvation. What happens to them? In answer to this question, Lord Brahmā and the other demigods said:] O lotus-eyed Lord, although nondevotees who accept severe austerities and penances to achieve the highest position may think themselves liberated, their intelligence is impure. They fall down from their position of imagined superiority because they have no regard for Your lotus feet.

According to the Bhāgavatam (1.2.11) there are three levels of transcendentalists: the self-realized knowers of the impersonal Brahman feature of the Absolute Truth; the knowers of the Paramātmā, the localized aspect of the Supreme, which is understood by the process of mystic yoga; and the bhaktas, who are in knowledge of the Supreme Personality of Godhead and engage in His devotional service.

Those who understand simply that the living being is not matter but spirit soul and who desire to merge into the Supreme Spirit Soul are in the lowest transcendental position. Above them are the mystic yogīs, who by meditation see within their hearts the four-handed Viṣṇu form of the Paramātmā, or Supersoul. But persons who actually associate with the Supreme Lord Kṛṣṇa, are the highest among all transcendentalists.

SYNONYMS
yoginām — of yogīs; api — also; sarveṣām — all types of; mat-gatena — abiding in Me, always thinking of Me; antaḥ-ātmanā — within himself; śraddhā-vān —in full faith; bhajate — renders transcendental loving service; yaḥ — one who; mām — to Me (the Supreme Lord); saḥ — he; me — by Me; yukta-tamaḥ — the greatest yogī; mataḥ — is considered.

TRANSLATION
And of all yogīs, the one with great faith who always abides in Me, thinks of Me within himself, and renders transcendental loving service to Me — he is the most intimately united with Me in yoga and is the highest of all. That is My opinion.

In the Bhakti-rasāmṛta-sindhu (1.4.15-16), Śrīla Rūpa Gosvāmī, a great authority in the devotional line, describes the different stages in coming to the point of love of Godhead:

Translation.
First, there is association with devotees, by which one gains faith. Then, one associates with devotees to learn the scriptures, and then practices bhakti. The anarthas are then destroyed. Steady bhakti without confusion follows. Desire for the Lord (ruci) appears. This is followed by spontaneous desire for the Lord (asakti). This becomes bhava and then prema. This is the progression for manifesting prema for those performing sadhana-bhakti.

The first requirement is that one should have sufficient faith that the only process for attaining love of Godhead is bhakti, devotional service to the Lord.

Throughout the Bhagavad-gītā Lord Kṛṣṇa teaches that one should give up all other processes of self-realization and fully surrender unto Him. That is faith. One who has full faith in Kṛṣṇa (śraddhā) and surrenders unto Him is eligible for being raised to the level of prema, which Lord Caitanya taught as the highest perfectional stage of human life.

Some persons are addicted to materially motivated religion, while others are addicted to economic development, sense gratification, or the idea of salvation from material existence. But prema, love of God, is above all these.

This highest stage of love is above mundane religiosity, above economic development, above sense gratification, and above even liberation, or salvation. Thus love of God begins with the firm faith that one who engages in full devotional service has attained perfection in all these processes.

The next stage in the process of elevation to love of God is sādhu-sańga, association with persons already in the highest stage of love of God. One who avoids such association and simply engages in mental speculation or so-called meditation cannot be raised to the perfectional platform.

But one who associates with pure devotees or an elevated devotional society goes to the next stage — bhajana-kriyā, or acceptance of the regulative principles of worshiping the Supreme Lord.

At this stage the devotee's service is based on his capacity to serve the Lord. The expert spiritual master engages his followers in work that will gradually develop their consciousness of service to the Lord. Therefore the preliminary stage of understanding prema, love of God, is to approach a proper pure devotee, accept him as one's spiritual master, and execute regulated devotional service under his guidance.

The next stage is called anartha-nivṛtti, in which all the misgivings of material life are vanquished. A person gradually reaches this stage by regularly performing the primary principles of devotional service under the guidance of the spiritual master.

There are many bad habits we acquire in the association of material contamination, chief of which are illicit sexual relationships, eating animal food, indulging in intoxication, and gambling. The first thing the expert spiritual master does when he engages his disciple in regulated devotional service is to instruct him to abstain from these four principles of sinful life.

Since God is supremely pure, one cannot rise to the highest perfectional stage of love of God without being purified. In the Bhagavad-gītā (10.12), when Arjuna accepted Kṛṣṇa as the Supreme Lord, he said:-

TRANSLATION
Arjuna said: You are the Supreme Personality of Godhead, the ultimate abode, the purest, the Absolute Truth. You are the eternal, transcendental, original person, the unborn, the greatest. All the great sages such as Nārada, Asita, Devala and Vyāsa confirm this truth about You, and now You Yourself are declaring it to me.

The Lord is the purest, and thus anyone who wants to serve the Supreme Lord must also be pure. Unless a person is pure, he can neither understand what the Personality of Godhead is nor engage in His service in love, for devotional service, as stated before, begins from the point of self-realization, when all misgivings of materialistic life are vanquished.

After following the regulative principles and purifying the material senses, one attains the stage of niṣṭhā, firm faith in the Lord. When a person has attained this stage, no one can deviate him from the conception of the Supreme Personality of Godhead.

No one can persuade him that God is impersonal, without a form, or that any form created by imagination can be accepted as God. Those who espouse these more or less nonsensical conceptions of the Supreme Lord cannot dissuade him from firm faith in the Supreme Personality of Godhead, Kṛṣṇa.

In the Bhagavad-gītā Lord Kṛṣṇa stresses in many verses that He is the Supreme Personality of Godhead. But despite Lord Kṛṣṇa's stressing this point, many so-called scholars and commentators still deny the personal conception of the Lord.

One famous scholar wrote in his commentary on the Bhagavad-gītā that one does not have to surrender to Lord Kṛṣṇa or even accept Him as the Supreme Personality of Godhead, but that one should rather surrender to "the Supreme within Kṛṣṇa." Such fools do not know what is within and what is without.

Niṣṭhā implies that one should accept the words of Bhagavad-gītā, the words of the Supreme Personality of Godhead, as they are, without any deviation or nonsensical commentary.

If a person is fortunate enough to vanquish all misgivings caused by material existence and rise up to the stage of niṣṭhā, he can then rise to the stages of ruci (taste) and āsakti (attachment for the Lord). Āsakti is the beginning of love of Godhead.

By progressing, one then advances to the stage of relishing a reciprocal exchange with the Lord in ecstasy (bhāva). Every living entity is eternally related to the Supreme Lord, and this relationship may be in any one of many transcendental humours.

At the stage called āsakti, attachment, a person can understand his relationship with the Supreme Lord. When he understands his position, he begins reciprocating with the Lord. By constant reciprocation with the Lord, the devotee is elevated to the highest stage of love of Godhead, prema.