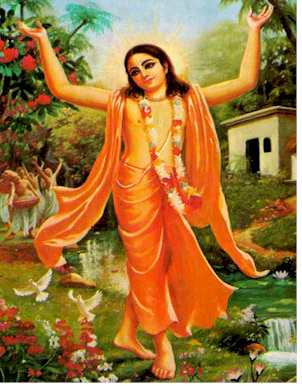 Agaty-eka-gatim natva. So the author of this Caitanya-caritamrta is offering his respectful obeisances unto Lord Caitanya. So he says, agaty-eka-gatim natva. Agaty, persons who have fallen, who have no hope for reaching the supreme destination, for them Lord Caitanya is the only hope. In this age, it is stated in authoritative scriptures, in this age the people are unfortunate. Of course, they are very much proud of advancing. From spiritual point of view, the people of this age, Kali-yuga, they are unfortunate. Their description is given in the Srimad-Bhagavatam, Second Chapter, First Canto, that people are short-living, their duration of life is very short, and they are very slow in the matter of spiritual realization. The human form of life is especially meant for spiritual realization, but they have forgotten that aim of life. They are very much serious about maintaining about the necessities of this body, which he's not. And if somebody's interested to have some taste of spiritual realization, they are misdirected.

And they are unfortunate, upadrutah, and always disturbed by so many things.

So this is the position of the present-day population and the author of Caitanya-caritamrta,he says that Lord Caitanya is the only hope for these people. Why? Because spiritual realization is not an ordinary subject matter. But He has given us the shortcut. He's so kind to the people of the world that simply He has introduced this "Hare Krishna, Hare Krishna, Krishna Krishna, Hare Hare/ Hare Rama, Hare Rama, Rama Rama, Hare Hare." By simple chanting of this transcendental vibration the people of this age will make exact progress in the matter of spiritual realization. Therefore this reference is there, agaty-eka-gatim. Those who are hopeless about their spiritual realization, Lord Caitanya is the only one hope. So hinarthadhika-sadhakam sri-caitanyam likhamy asya. "So I am just offering my respect to Lord Sri Caitanya. I am trying to describe about His transcendental activities and instructions and philosophy."

Now... jaya jaya sri-caitanya jaya nityananda jayadvaita-candra jaya gaura-bhakta-vrnda.This is the process of offering respect to Lord Caitanya. What is that? Lord Caitanya is always presented with five transcendental entourage. He is Himself present, and His next expansion, Nityananda, and His incarnation, Advaita, and His internal potency, Gadadhara, and His marginal potency, Sri Srivasa. So panca-tattvatmakam krsnam. He is Krishna, but He is present in this age with His five associates. Panca-tattvatmakam krsnam bhakta-rupa-svarupakam. But although He is Krishna, He presents Himself as a devotee of Krishna. Bhakta-rupa-svarupakam. Bhaktavataram bhaktakhyam. And incarnation of devotee, Advaita, and bhaktakhyam. These five associates are always with Krishna Caitanya. So to offer Krishna Caitanya means to offer with His associates. Sa-ghosti. This is the process.

Now Krishna's... about the position of Krishna, what is Krishna, he has already described. The first proposition is sambandha. Sambandha means we have to understand our relationship with Krishna. Just like if we want to make some relationship with a friend, then we must know about him, what he is. So we are going to be Krishna conscious, so we must know what is Krishna. So Krishna, about Krishna he has described shortly, that He is personally like this, His incarnations are like this, and there are so many incarnations, and He is existing in this way, He manifests Himself in this material world in this way. As far as possible he has given description about Krishna. Now, about Krishna's abode... Krishna means not only Krishna. Nama dhama guna lila parikara vaisistha. Krishna means Krishna Himself, His name, His place, nama dhama, His quality, then His entourage, then His pastime. All these things Krishna means. Because we are not impersonalists, simply understanding Brahman we are not satisfied. The impersonalists are satisfied simply understanding that He is Brahman. But the Vaisnavas, they are not satisfied simply by knowing Brahman. In the Bhagavad-gita it is said, brahma-bhutah.Brahma-bhutah means he's already Brahman, but he forgot himself. He thought himself that "I am matter." That is illusion. So every living entity, by constitutional position he is Brahman, but his forgetfulness -- he thinks that "I am something of this matter." Sobrahma-bhutah, when one becomes spiritually realized that he is not anything of this material world, he is spirit soul, brahma-bhutah, this is called brahma-bhutah. So long he does not understand that he is spiritual entity, he is jiva-bhutah. That is called jiva-bhutah.And when he understands that he is nothing of this material world, he belongs to the spiritual world and his position is spiritual identity, that is called brahma-bhutah stage. That is described in Bhagavad-gita. Brahma-bhutah prasannatma (Bhagavad-gita 18.54).Prasannatma means he becomes immediately enlivened: "I don't belong to this. Why I am identifying myself with these all miseries of material world? I belong to the part and parcel of the Supreme, sac-cid-ananda-vigrahah (Brahma-samhita. 5.1), eternal, blissful knowledge." So he becomes prasannatma. Prasannatma means joyful, spiritually enlivened.

So this is the first stage of Brahman realization. And Caitanya Mahaprabhu says that this Brahman realization, people take so much, I mean to say, undertaking of austerity, penance and... but by chanting Hare Krishna, He says, ceto-darpana-marjanam. Ceto-darpana-marjanam (Caitanya-caritamrta, Antya-lila 20.12). At once one becomes cleansed of the dust accumulated on the mind. Because everything is misconception. I am thinking matter. Actually I am not. This is misconception. So by chanting Hare Krishna, the first installment of benefit is that one becomes brahma-bhutah. He at once becomes brahma-bhutah. And prasannatma. Prasannatma. Brahma-bhutah. Next stage is prasannatma.Atma. He becomes engladdened: "Oh, I am not this matter." Caitanya Mahaprabhu, the same thing, He says: ceto-darpana-marjanam bhava-maha-davagni-nirvapanam. Thisbhava-maha-davagni. This world is compared with forest fire. It is going on. The fire is going on. So for a realized soul, the fire is at once extinguished. One who is realized soul, that he's not this matter, the fire of this material existence at once extinguished. So Lord Caitanya gave us this opportunity, and the author of Caitanya-caritamrta, he's saying thatagaty-eka-gatim. Those who have fallen, for them Lord Caitanya is the only hope.

Now Lord Caitanya describes about the kingdom of God, or the spiritual sky. He says... He has already explained to you about different kinds of expansions: prabhava, vaibhava, vilasa, prakasa. You may remember it. So there are innumerable expansions. Eko bahu syama: "The one Supreme Lord has become so many." The same example: the original candle, and from that candle, you can expand millions and millions candles. Similarly, the original Personality of Godhead is Sri Krishna, and He has expanded in so many ways. Now, Lord Caitanya says, all the expanded plenary manifestation of Krishna has got a separate abode. Each and every one of them has got a separate abode. Sarva rupera dhama-paravyoma-dhame. And where they are? That is in the paravyoma. Paravyomameans... vyoma means sky, and para means transcendental, beyond this sky. This sky is called material sky, and beyond this there is paravyoma, spiritual sky. They have no information. The material scientists, they have no information. What information they have got? They cannot reach even the moon planet, what to speak of others. It is far, far away. Whatever... we can see the sky just like a pot, and that is the covering of this universe. And if you can penetrate that covering -- that space is also many, many times longer than this outer space -- then you'll find the spiritual sky. That is not possible for any material scientist to find out where the spiritual sky is. But you can understand from authoritative scriptures and from authorities like Lord Caitanya. He says that for each of the expansions of Sri Krishna, there is a separate, I mean to say, planet in the, I mean to say, spiritual sky. Prthak prthak vaikuntha nahika ganane. Prthak prthak. Each of them has got a separate Vaikuntha planet, but how many planets are there nobody can count. Nahika tara ganane. So some estimate? The Lord says:

There is no question of voidness or impersonalist. He says that all those Vaikuntha planets are so big that some of them, hundreds, some, millions and millions of miles, I mean to say, area. What is called? Round. Eka vaikunthera vistara varnana. Vistarameans very much expanded.

The Lord says, "So what these ordinary living entities with teeny brain, they can calculate about Lord's opulence?" These are opulences of the Supreme Lord. He says, Brahma, Siva. Brahma. Brahma is considered to be the highest of the living entities, and Siva, Lord Siva, he is also considered very high-grade demigod. So Lord Caitanya says that even Brahma and Siva cannot calculate, and what to speak of these ordinary human beings. They cannot understand it. It is not possible. Ei-mata sad-aisvarya. Nobody can calculate the six opulences of Krishna. We have discussed the six opulences: wealth, riches and strength and fame and knowledge and beauty and renunciation. Nobody can calculate. So he's giving a quotation from Srimad-Bhagavatam:

He, bhuman: "O the great, O the Supreme Personality of Godhead, O the Supersoul, O the master of mysticism, how You are acting tri-bhuvane, tri-bhuvane, within the three worlds?" Three world means that in the material there is lower planet and middle planets and upper planets, these three worlds. "So how You are acting within these three worlds, and how You are utilizing Your internal potency, yogamaya, extending Yourself in so many expansions, plenary expansions? Who can understand You? Nobody can understand You." You may say if nobody can understand, what is the use of discussing such things? That is the qualification of the devotees. In spite of their inability to understand His supremacy, the expansion, the extension of the Supreme Lord, still, by discussing about the Supreme Lord, hearing and chanting, they take transcendental pleasure. It is not that anybody can understand Krishna, but still, it is a transcendental pleasure to try to understand. Not that we shall be able to understand Krishna fully; it is not in our power. But still, bodhayantah parasparam, tusyanti ca ramanti ca. Mahatma, those who are great souls, in their society, in their spiritual society of Krishna consciousness, by discussing about Krishna in terms of the Vedic literature and authoritative literature, they enjoy transcendentally. This is transcendental pleasure.

Tags: caitanya, hope, lord, only, prabhupada, srila, by, is, the
Email me when people reply –
Follow