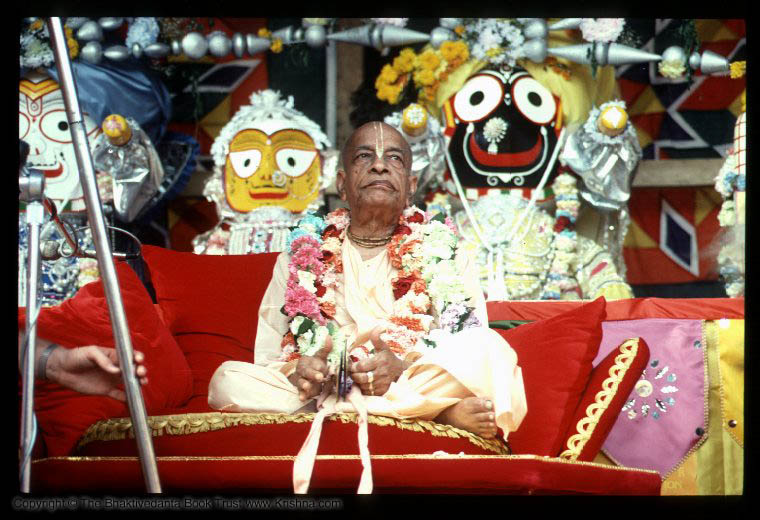 "I offer my respectful obeisances unto Śrī Kṛṣṇa Caitanya and Lord Nityānanda, who are like the sun and moon. They have arisen simultaneously on the horizon of Gauḍa to dissipate the darkness of ignorance and thus wonderfully bestow benediction upon all." This material world is a dark well of ignorance. The fallen soul in this dark well must take shelter of the lotus feet of Gaura-Nitāi, for thus he can easily emerge from material existence. Without Their strength, simply attempting to get out of the clutches of matter by speculative knowledge will be insufficient.
(Srimad Bhagavatam------7:15:46------purport).

The Kṛṣṇa consciousness movement is also viṣṇu-ārādhanam, or worship of Lord Viṣṇu, according to the age. The payo-vrata method of viṣṇu-ārādhanam was enunciated long, long ago by Kaśyapa Muni to his wife, Aditi, in the heavenly planets, and the same process is bona fide on earth even now. Especially for this age of Kali, the process accepted by the Kṛṣṇa consciousness movement is to open hundreds and thousands of Viṣṇu temples (temples of Rādhā-Kṛṣṇa, Jagannātha, Balarāma, Sītā-Rāma, Gaura-Nitāi and so on). Performing prescribed worship in such temples of Viṣṇu and thus worshiping the Lord is as good as performing the payo-vrata ceremony recommended here. The payo-vrata ceremony is performed from the first to the thirteenth day of the bright fortnight of the moon, but in our Kṛṣṇa consciousness movement Lord Viṣṇu is worshiped in every temple according to a schedule of twenty-four hours of engagement in performing kīrtana, chanting the Hare Kṛṣṇa mahā-mantra, offering palatable food to Lord Viṣṇu and distributing this food to Vaiṣṇavas and others.
(Srimad Bhagavatam------7:16:60------purport).

The Pañca-tattva is a very important factor in understanding Śrī Caitanya Mahāprabhu. There are sahajiyās who, not knowing the importance of the Pañca-tattva, concoct their own slogans, such as bhaja nitāi gaura, rādhe śyāma, japa hare kṛṣṇa hare rāma or śrī-kṛṣṇa-caitanya prabhu-nityānanda hare kṛṣṇa hare rāma śrī-rādhe govinda. Such chants may be good poetry, but they cannot help us to go forward in devotional service. In such chants there are also many discrepancies, which need not be discussed here. Strictly speaking, when chanting the names of the Pañca-tattva, one should fully offer his obeisances: śrī-kṛṣṇa-caitanya prabhu-nityānanda śrī-advaita gadādhara śrīvāsādi-gaura-bhakta-vṛnda. By such chanting one is blessed with the competency to chant the Hare Kṛṣṇa mahā-mantra without offense.
(Sri Caitanya Caritamrta------1:7:168------purport).

The prākṛta-sahajiyās who chant nitāi-gaura rādhe śyāma have very little knowledge of the Bhāgavata conclusion, and they hardly follow the Vaiṣṇava rules and regulations, and yet because they chant bhaja nitāi-gaura, their chanting immediately evokes tears and other signs of ecstasy. Although they do not know the principles of Vaiṣṇava philosophy and are not very much advanced in education, by these symptoms they attract many men to become their followers. Their ecstatic tears will of course help them in the long run, for as soon as they come in contact with a pure devotee their lives will become successful. Even in the beginning, however, because they are chanting the holy names of nitāi-gaura, their swift advancement on the path of love of Godhead is very prominently visible.
(Sri Caitanya Caritamrta------1:8:22------purport).

For an ordinary man, worship of Śrī Caitanya and Nityānanda Prabhu or the Pañca-tattva is easier than worship of Rādhā and Kṛṣṇa. Unless one is very fortunate, he should not be induced to worship Rādhā-Kṛṣṇa directly. A neophyte student who is not sufficiently educated or enlightened should not indulge in the worship of Śrī Rādhā and Kṛṣṇa or the chanting of the Hare Kṛṣṇa mantra. Even if he does so, he cannot get the desired result. One should therefore chant the names of Nitāi-Gaura and worship Them without false prestige. Since everyone within this material world is more or less influenced by sinful activities, in the beginning it is essential that one take to the worship of Guru-Gaurāṅga and ask their favor, for thus despite all his disqualifications one will very soon become qualified to worship the Rādhā-Kṛṣṇa vigraha.
(Sri Caitanya Caritamrta------1:8:31------purport).

In the Gaura-gaṇoddeśa-dīpikā (115) it is said that the two brothers Jagāi and Mādhāi were formerly the doorkeepers named Jaya and Vijaya, who later became Hiraṇyākṣa and Hiraṇyakaśipu. Jagāi and Mādhāi were born in respectable brāhmaṇa families, but they adopted the professions of thieves and rogues and thus became implicated in all kinds of undesirable activities, especially woman-hunting, intoxication and gambling. Later, by the grace of Lord Caitanya Mahāprabhu and Śrī Nityānanda Prabhu, they were initiated, and they got the chance to chant the Hare Kṛṣṇa mahā-mantra. As a result of chanting, both brothers became exalted devotees of Lord Caitanya Mahāprabhu. The descendants of Mādhāi still exist, and they are respectable brāhmaṇas. The tombs of these two brothers, Jagāi and Mādhāi, are in a place known as Ghoṣahāṭa, or Mādhāitalā-grāma, which is situated about one mile south of Katwa. It is said that Śrī Gopīcaraṇa dāsa Bābājī established a temple of Nitāi-Gaura at this place about two hundred fifty years ago.
(Sri Caitanya Caritamrta------1:10:120------purport).

"I offer my respectful obeisances unto the Supreme Lord Śrī Kṛṣṇa Caitanya, who is more magnanimous than any other avatāra, even Kṛṣṇa Himself, because He is bestowing freely what no one else has ever given—pure love of Kṛṣṇa." Śrīla Locana dāsa Ṭhākura has also sung, parama karuṇa, pahuṅ dui jana, nitāi-gauracandra: "The two brothers Nitāi and Gaura are so kind that no one can compare to Them." Similarly, Śrīla Narottama dāsa Ṭhākura has sung:
vrajendra-nandana yei, śacī-suta haila sei,
balarāma ha-ila nitāi,
dīna-hīna yata chila, hari-nāme uddhārila,
tā’ra sākṣī jagāi-mādhāi
"Just to deliver all the sinful persons of this age by propagating the chanting of the holy name, Lord Kṛṣṇa and Lord Balarāma have advented as Śrī Caitanya Mahāprabhu and Nityānanda Prabhu. Jagāi and Mādhāi are evidence of Their success."
(Sri Caitanya Caritamrta------2:14:16------purport).

Śrī Caitanya Mahāprabhu personally renovated Vṛndāvana-dhāma and advised His chief disciples, Rūpa and Sanātana, to develop it and open it to attract the spiritual vision of the general populace. At present there are about five thousand temples in Vṛndāvana, and still our society, the International Society for Krishna Consciousness, is constructing a huge, magnificent temple for the worship of Lord Kṛṣṇa and Lord Balarāma, along with Rādhā-Kṛṣṇa and Guru-Gaurāṅga. Since there is no prominent Kṛṣṇa-Balarāma temple in Vṛndāvana, we are attempting to construct one so that people will be attracted to Kṛṣṇa-Balarāma, or Nitāi-Gauracandra. Vrajendra-nandana yei, śacī suta haila sei. Narottama dāsa Ṭhākura says that Balarāma and the son of Mahārāja Nanda have advented Themselves as Gaura-Nitāi. To propagate this fundamental principle, we are establishing a Kṛṣṇa-Balarāma temple to broadcast to the world that worship of Gaura-Nitāi is the same as worship of Kṛṣṇa-Balarāma.
(Sri Caitanya Caritamrta------2:16:281------purport).