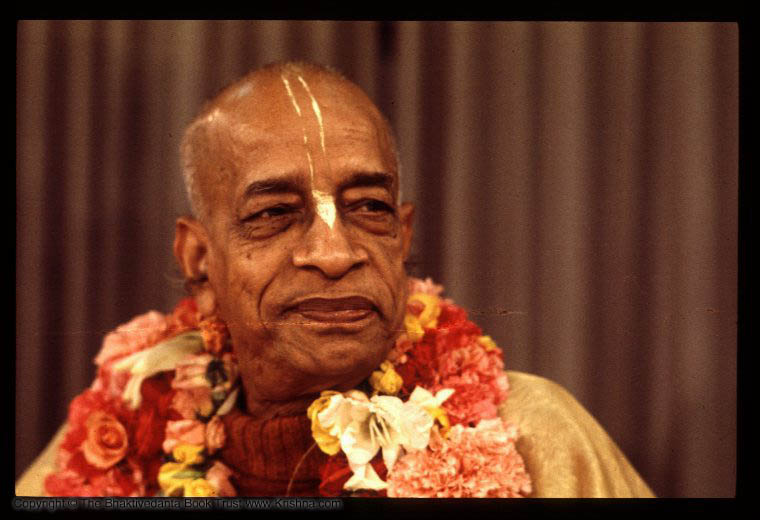 The tilak is an external symbol of our surrender to Krishna, or to our object of worship. The shape and material used may differ according to the particular process of surrender the sampradaya follows.

In the Sri Vaishnava sampradaya the tilak is made out of the white mud found in anthills. The scriptures tell us that the mud from the base of a Tulasi plant and the white mud from within the ant hill are both pure and best for making tilak. The Sri Vaishnavas will draw two lines representing the feet of Sri Narayana, and in the middle they will put a red line to represent Lakshmi Devi. The red line was originally made from a red stone found within the ant hill. The ants would usually make their ant hill on top of these red stones. When you rub the stone in water, a red color paint is formed. The category of Shakti is generally represented with the color red in all lines, both Vedic and Tantrik. Because the Sri Vaishnava sampradaya begins with Sri Lakshmi Devi, and because they approach Narayana only through Lakshmi, their tilak reflects this process of surrender. The tilaks of each sampradaya actually depict the siddhanta of the sampradaya.

In the Madhva sampradaya the tilak is made out of Gopichandana mud from Dwaraka. Two vertical lines are made out of Gopichandana to represent the feet of Lord Krishna. This gopichandana tilak is nearly identical to that used in the Gaudiya sampradaya. In between a vertical black line is made from the daily coal of the yajna-kunda. In their sampradaya, the process of worship involved nitya-homa, or daily fire sacrifices to the Lord. The remnant coal of the puja was taken each day to mark the forehead. Underneath the black line, a yellow or red dot was put to indicate Lakshmi or Radha. Those who did not perform daily fire sacrifice would only put the simple gopichandana tilak.

In the Gaudiya sampradaya the tilak is usually made out of the Gopichandana mud. Some lineages prefer to use the mud from Vrindavana. The main tilak is basically identical to the Madhva tilak. The slight difference arises due to the emphasis on nama-sankirtana, or the chanting of the Lord's names. In Sri Chaitanya's line, nama-sankirtana is the yajna to be performed in kali yuga, and not the daily fire sacrifice performed in the Madhva sampradaya. As such, the black line made from the ash of the fire sacrifice is not applied in the Gaudiya sampradaya. The second difference arises due to Sri Chaitanya's process of approaching the Lord. In the Gaudiya line one does not approach Srimati Radharani directly, but always indirectly through the servant. To indicate this, the red dot representing Radha is replaced with a tulasi leaf offered at the base of the Lord's feet. Only with the mercy of Tulasi Devi can we develop pure devotion to Sri Sri Radha and Krishna.

In the scriptures there are very general descriptions of the procedure for applying tilak. For example it is mentioned that the tilak should be urdhva-pundra, or vertical lines; the body should be marked in twelve locations, etc. But these instructions are very general and leave a lot of the details to the acharyas. Even in a simple point, such as the location of the tilak, one person may interpret the 'shoulder' to start from the arm, where as another may interpret it to start higher up near the neck. This is actually the case in the two branches of the Sri Vaishna sampradaya.

The actual design of the tilak will manifest either through divine revelation or through scientific study. An example of divine revelation is the Gaudiya lineage of Sri Shyamananda. Radharani revealed a portion of her broken bangle to Sri Shyamananda, which he used in applying tilak to his forehead. As a result, his followers apply a unique design of tilak from other branches of the Gaudiya sampradaya.

In other cases, an acharya may scientifically analyze the sampradaya siddhanta and compare its compatibility with the tilak they wear. The external purpose of the tilak is to differentiate the followers of a sampradaya from other classes of philosophers, just as one branch of the armed forces wears a uniform to differentiate itself from the other branches. In such a case, the tilak may change when there occurs a shift or branching of the sampradaya due to philosophical views. The newly formed branch may re-analyze the tilak in connection with its siddhanta and make changes that fully reflect their process of surrender. Such is the case among the two branches of the Sri Vaishnava sampradaya. Due to a difference of opinion in regards to the process of surrender, two distinct tilaks emerged.

In any case, the ultimate purpose of tilak is to sanctify oneself and mark the body as the temple of the Lord. The scriptures do not specify in detail the manner that this should be done, and as such it is the acharyas who crystalize the procedures while adhering to the general prescriptions given in the scriptures.

A Vishnava applies the tilak to 12 different places on his body. This is like decorating the body and also putting an armor against all obstacles. For putting tilak on each place of the body there are different mantras. A list of these mantras are given below.

Wash the excess tilaka from your hands with water, and then wipe your sikha with the palm of your right hand while chanting:

Tags: ‏, importance, is, of, q, the, tilak, wearing, what
Email me when people reply –
Follow