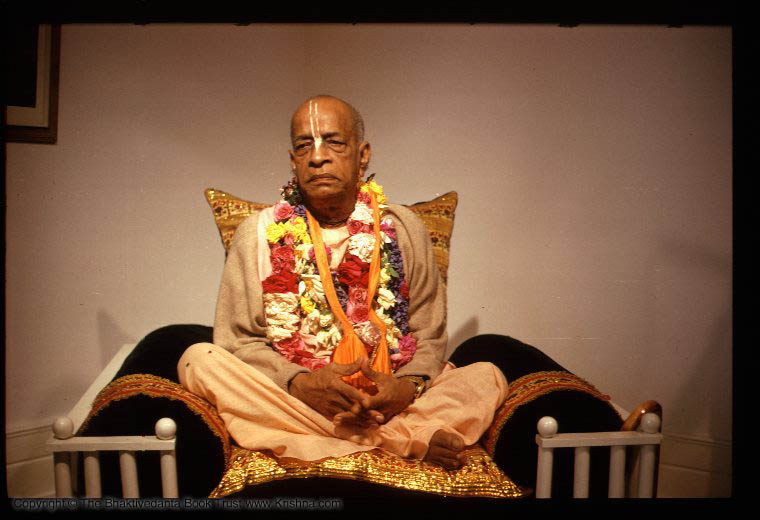 Between the husband and wife, one person is sufficient to execute this devotional service. Because of their good relationship, both of them will enjoy the result. Therefore if the wife is unable to execute this process, the husband should carefully do so, and the faithful wife will share the result.
(S.B.6:19:18).

When the Supreme Personality of Godhead is pleased with the living entity because of his devotional service, one becomes a paṇḍita and does not make distinctions between enemies, friends and himself. Intelligently, he then thinks, "Every one of us is an eternal servant of God, and therefore we are not different from one another." (S.B.7:5:12).

The human form of life affords one a chance to return home, back to Godhead. Therefore every living entity, especially in the human form of life, must engage in devotional service to the lotus feet of Lord Viṣṇu. This devotional service is natural because Lord Viṣṇu, the Supreme Personality of Godhead, is the most beloved, the master of the soul, and the well-wisher of all other living beings. (S.B.7:6:2).

Nothing is unobtainable for devotees who have satisfied the Supreme Personality of Godhead, who is the cause of all causes, the original source of everything. The Lord is the reservoir of unlimited spiritual qualities. For devotees, therefore, who are transcendental to the modes of material nature, what is the use of following the principles of religion, economic development, sense gratification and liberation, which are all automatically obtainable under the influence of the modes of nature? We devotees always glorify the lotus feet of the Lord, and therefore we need not ask for anything in terms of dharma, kāma, artha and mokṣa. (S.B.7:6:25).

One who is situated in devotional service is certainly the controller of his senses, and thus he is a liberated person. When such a liberated person, the pure devotee, hears of the transcendental qualities and activities of the Lord's incarnations for the performance of various pastimes, his hair stands on end on his body, tears fall from his eyes, and in his spiritual realization his voice falters. Sometimes he very openly dances, sometimes he sings loudly, and sometimes he cries. Thus he expresses his transcendental jubilation. (S.B.7:7:34).

When a devotee becomes like a person haunted by a ghost, he laughs and very loudly chants about the qualities of the Lord. Sometimes he sits to perform meditation, and he offers respects to every living entity, considering him a devotee of the Lord. Constantly breathing very heavily, he becomes careless of social etiquette and loudly chants like a madman, "Hare Kṛṣṇa, Hare Kṛṣṇa! O my Lord, O master of the universe!"
(S.B.7:7:35).

The devotee is then freed from all material contamination because he constantly thinks of the Lord's pastimes and because his mind and body have been converted to spiritual qualities. Because of his intense devotional service, his ignorance, material consciousness and all kinds of material desires are completely burnt to ashes. This is the stage at which one can achieve the shelter of the Lord's lotus feet.
(S.B.7:7:36).

In human society there are various activities performed for the protection of one's wealth and life by one's words, one's mind and one's actions, but they are all performed for one's personal or extended sense gratification with reference to the body. All these activities are baffled because of being separate from devotional service. But when the same activities are performed for the satisfaction of the Lord, the beneficial results are distributed to everyone, just as water poured on the root of a tree is distributed throughout the entire tree. (S.B.8:9:29).

By chanting the holy name of the Supreme Lord, one comes to the stage of love of Godhead. Then the devotee is fixed in his vow as an eternal servant of the Lord, and he gradually becomes very much attached to a particular name and form of the Supreme Personality of Godhead. As his heart melts with ecstatic love, he laughs very loudly or cries or shouts. Sometimes he sings and dances like a madman, for he is indifferent to public opinion. (S.B.11:2:40).

A devotee should not see anything as being separate from the Supreme Personality of Godhead, Kṛṣṇa. Ether, fire, air, water, earth, the sun and other luminaries, all living beings, the directions, trees and other plants, the rivers and oceans — whatever a devotee experiences he should consider to be an expansion of Kṛṣṇa. Thus seeing everything that exists within creation as the body of the Supreme Lord, Hari, the devotee should offer his sincere respects to the entire expansion of the Lord's body. (S.B.11:2:41).

First Previous of 11 Next
This reply was deleted.