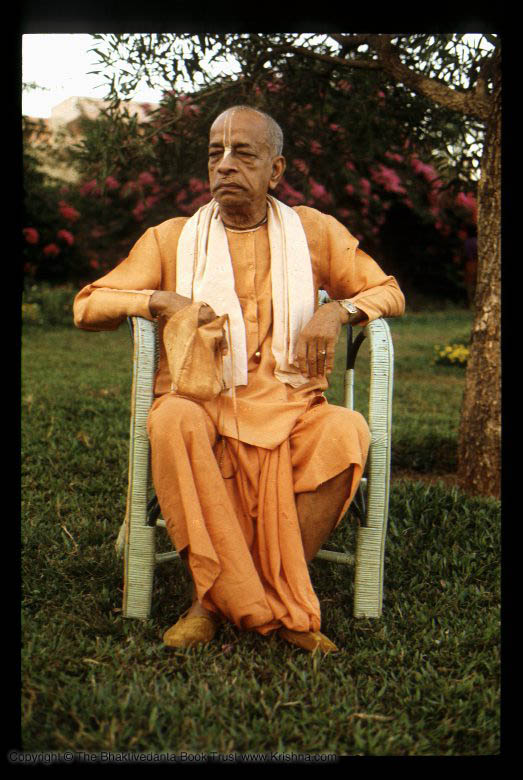 The word abhijātasya in reference to one born of transcendental qualities or godly tendencies is very significant. To beget a child in a godly atmosphere is known in the Vedic scriptures as Garbhādhāna-saṁskāra. If the parents want a child in the godly qualities they should follow the ten principles recommended for the social life of the human being. In Bhagavad-gītā we have studied also before that sex life for begetting a good child is Kṛṣṇa Himself. Sex life is not condemned, provided the process is used in Kṛṣṇa consciousness. Those who are in Kṛṣṇa consciousness at least should not beget children like cats and dogs but should beget them so that they may become Kṛṣṇa conscious after birth. That should be the advantage of children born of a father and mother absorbed in Kṛṣṇa consciousness.
(Bhagavad-Gita----16:1-3----purport).

The friends of the twice-born families are those who are born in the families of brāhmaṇas, kṣatriyas and vaiśyas, or the spiritually cultured families, but who themselves are not equal to their forefathers. Such descendants are not recognized as such, for want of purificatory achievements. The purificatory activities begin even before the birth of a child, and the seed-giving reformatory process is called Garbhādhāna-saṁskāra. One who has not undergone such Garbhādhāna-saṁskāra, or spiritual family planning, is not accepted as being of an actual twice-born family. The Garbhādhāna-saṁskāra is followed by other purificatory processes, out of which the sacred thread ceremony is one. This is performed at the time of spiritual initiation. After this particular saṁskāra, one is rightly called twice-born.
(Srimad Bhagavatam----1:4:25----purport).

The protection of children gives the human form of life its best chance to prepare the way of liberty from material bondage. Such protection of children begins from the very day of begetting a child by the purificatory process of garbhādhāna-saṁskāra, the beginning of pure life.
(Srimad Bhagavatam----1:8:5----purport).

Only by pious acts can one be allowed to get good wealth, good education and beautiful features. The saṁskāras of the school of sanātana-dharma (man's eternal engagement) are highly suitable for creating an atmosphere for taking advantage of good stellar influences, and therefore garbhādhāna-saṁskāra, or the first seedling purificatory process prescribed for the higher castes, is the beginning of all pious acts to receive a good pious and intelligent class of men in human society. There will be peace and prosperity in the world due to good and sane population only; there is hell and disturbance only because of the unwanted, insane populace addicted to sex indulgence.
(Srimad Bhagavatam----1:12:12----purport).

The culture of a human being begins when the father invests his semen in the womb of the mother. According to his status of work, a living entity is placed in a particular father's semen, and because Vidura was not an ordinary living entity, he was given the chance to be born from the semen of Vyāsa. The birth of a human being is a great science, and therefore reformation of the act of impregnation according to the Vedic ritual called Garbhādhāna-saṁskāra is very important for generating good population. The problem is not to check the growth of the population, but to generate good population on the level of Vidura, Vyāsa and Maitreya. There is no need to check the growth of population if the children are born as human beings with all precautions regarding their birth. So-called birth control is not only vicious but also useless.
(Srimad Bhagavatam----3:5:19----purport).

The living entity takes shelter within the semen of a father, which is injected within the womb of a mother, and with the help of the mother's emulsified ovum the living entity grows a particular type of a body. In this connection it is to be remembered that the mind of Kaśyapa Muni was not in order when he conceived the two sons, Hiraṇyākṣa and Hiraṇyakaśipu. Therefore the semen he discharged was simultaneously extremely powerful and mixed with the quality of anger. It is to be concluded that while conceiving a child one's mind must be very sober and devotional. For this purpose the Garbhādhāna-saṁskāra is recommended in the Vedic scriptures. If the mind of the father is not sober, the semen discharged will not be very good.
(Srimad Bhagavatam----3:16:35----purport).

It follows that any father and mother should also be careful while begetting children. The mental condition of a child depends upon the mental status of his parents at the time he is conceived. According to the Vedic system, therefore, the garbhādhāna-saṁskāra, or the ceremony for giving birth to a child, is observed. Before begetting a child, one has to sanctify his perplexed mind. When the parents engage their minds in the lotus feet of the Lord and in such a state the child is born, naturally good devotee children come; when the society is full of such good population, there is no trouble from demoniac mentalities.
(Srimad Bhagavatam----3:20:28----purport).

Too much salt, chili, onion and similar food is forbidden for the pregnant mother because the child's body is too delicate and new for him to tolerate such pungent food. Restrictions and precautions to be taken by the pregnant mother, as enunciated in the smṛti scriptures of Vedic literature, are very useful. We can understand from the Vedic literature how much care is taken to beget a nice child in society. The garbhādhāna ceremony before sexual intercourse was compulsory for persons in the higher grades of society, and it is very scientific. Other processes recommended in the Vedic literature during pregnancy are also very important.
(Srimad Bhagavatam----3:31:5----purport).

The purity of hereditary succession is called amogha-vīrya. The pious seminal succession in the twice-born families of the brāhmaṇas and kṣatriyas especially, as well as in the families of vaiśyas also, must be kept very pure by the observation of the purificatory processes beginning with garbhādhāna-saṁskāra, which is observed before conceiving a child. Unless this purificatory process is strictly observed, especially by the brāhmaṇas, the family descendants become impure, and gradually sinful activities become visible in the family.
(Srimad Bhagavatam----4:14:42----purport).

In this regard the secret of success depends on the parents' acceptance of the various purificatory methods known as saṁskāras. The first saṁskāra, thegarbhādhāna-saṁskāra, or child-begetting saṁskāra, is compulsory, especially for the higher castes, the brāhmaṇas and the kṣatriyas. As stated in Bhagavad-gītā, sex life which is not against religious principles is Kṛṣṇa Himself, and according to religious principles, when one wants to beget a child he must perform the garbhādhāna-saṁskāra before having sex. The mental state of the father and mother before sex will certainly affect the mentality of the child to be begotten.
(Srimad Bhagavatam----4:22:53----purport).

Children begotten under the rules and regulations of the scriptures generally become as good as the father and mother, but children born illegitimately mainly become varṇa-saṅkara. The varṇa-saṅkara population is irresponsible to the family, community and even to themselves. Formerly the varṇa-saṅkara population was checked by the observation of the reformatory method called garbhādhāna-saṁskāra, a child-begetting religious ceremony. In this verse we find that although King Purañjana had begotten so many children, they were not varṇa-saṅkara. All of them were good, well-behaved children, and they had good qualities like their father and mother.
(Srimad Bhagavatam----4:27:7----purport).

The word śaukra janma means "taking birth by seminal discharge." Animals can take their birth in this way too. However, a human being can be reformed from the śaukra janma, as recommended in the Vedic civilization. Before the birth takes place, or before father and mother unite, there is a ceremony called garbhādhāna-saṁskāra, which must be adopted. This garbhādhāna-saṁskāra is especially recommended for higher castes, especially the brāhmaṇa caste. It is said in the śāstras that if the garbhādhāna-saṁskāra is not practiced among the higher castes, the entire family becomes śūdra. It is also stated that in this age of Kali, everyone is śūdra due to the absence of the garbhādhāna-saṁskāra. This is the Vedic system. According to the pāñcarātrika system, however, even though everyone is a śūdra due to the absence of the garbhādhāna-saṁskāra, if a person has but a little tendency to become Kṛṣṇa conscious, he should be given the chance to elevate himself to the transcendental platform of devotional service. Our Kṛṣṇa consciousness movement adopts this pāñcarātrika-vidhi, as advised by Śrīla Sanātana Gosvāmī.
(Srimad Bhagavatam----4:31:10----purport).

According to the Vedic system, therefore, before a child is conceived, the garbhādhāna-saṁskāra is performed. This ceremony molds the mentality of the father in such a way that when he plants his seed in the womb of his wife, he will beget a child whose mind will be completely saturated with a devotional attitude. At the present moment, however, there are no such garbhādhāna-saṁskāras, and therefore people generally have a lusty attitude when they beget children. Especially in this age of Kali, there are no garbhādhāna ceremonies; everyone enjoys sex with his wife like a cat or dog.
(Srimad Bhagavatam----5:2:2----purport).

The varṇāśrama system delineates the divisions of brāhmaṇa, kṣatriya, vaiśya and śūdra. It also sets forth the system of saṁskāras. The garbhādhāna-saṁskāra, the ceremony for begetting a child, must be observed by the higher section of people, namely the dvijas. One who follows the garbhādhāna saṁskāra system is actually twice-born, but those who do not, who deviate from the principles of varṇāśrama-dharma, are called dvija-bandhus.
(Srimad Bhagavatam----7:11--summary).

According to Vedic principles, before creating progeny one must fully control the senses. This control takes place through the garbhādhāna-saṁskāra. In India there is great agitation for birth control in various mechanical ways, but birth cannot be mechanically controlled. As stated in Bhagavad-gītā (13.9), janma-mṛtyu jarā-vyādhi-duḥkha-doṣānudarśanam: birth, death, old age and disease are certainly the primary distresses of the material world. People are trying to control birth, but they are not able to control death; and if one cannot control death, one cannot control birth either. In other words, artificially controlling birth is not any more feasible than artificially controlling death.
(Srimad Bhagavatam----10:3:33----purport).

As stated in Bhagavad-gītā (7.11), dharmāviruddho bhūteṣu kāmo'smi: sex not contrary to religious principles is a representation of the Supreme Lord. People should be educated in how to give birth to good children through saṁskāras, beginning with the garbhādhāna-saṁskāra; birth should not be controlled by artificial means, for this will lead to a civilization of animals. If one follows religious principles, he automatically practices birth control because if one is spiritually educated he knows that the after-effects of sex are various types of misery (bahu-duḥkha-bhāja). One who is spiritually advanced does not indulge in uncontrolled sex.
(Srimad Bhagavatam----10:3:33----purport).

Even before the child is born, when the mother is pregnant, many recommended ritualistic ceremonies are performed. For example, when the child has been within the womb for three months and for seven months, there is a ceremony the mother observes by eating with neighboring children. This ceremony is called svāda-bhakṣaṇa. Similarly, before the birth of the child there is the garbhādhāna ceremony. In Vedic civilization, childbirth or pregnancy is never regarded as a burden; rather, it is a cause for jubilation. In contrast, people in modern civilization do not like pregnancy or childbirth, and when there is a child, they sometimes kill it.
(Srimad Bhagavatam----10:7:4----purport).

No one can be classified as a member of a particular caste, especially of a higher caste—brāhmaṇa, kṣatriya or vaiśya—simply by birthright. If one is not purified by the process of the seed-giving ceremony, or garbhādhāna-saṁskāra, he is immediately classified amongst the śūdras because only the śūdras do not undergo this purificatory process. Sex life without the purificatory process of Kṛṣṇa consciousness is merely the seed-giving process of the śūdras or the animals. Kṛṣṇa consciousness is therefore the best process of purification. By this process everyone can come to the platform of a Vaiṣṇava, which includes having all the qualifications of a brāhmaṇa.
(Krsna Book).