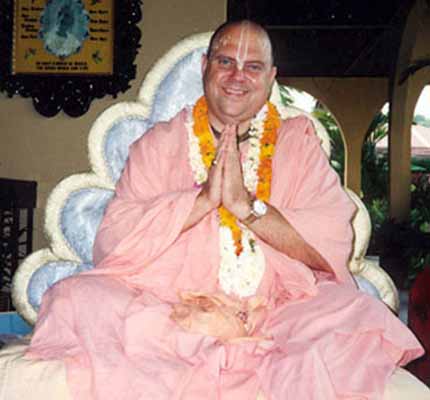 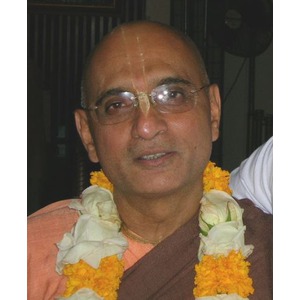 I was very fortunate to have a long and intimate association with His
Holiness Jayapataka Swami Maharaja since I joined ISKCON. Undoubtedly he is
one of the most exemplary leaders of ISKCON today. With the sincerity he is
serving Srila Prabhupada is extremely praiseworthy. As a matter of fact ever
since he met Srila Prabhupda he offered himself completely to his service
and the way he is serving him till today is a wonderful example for all of
us.

In the early days in Mayapur there were not so many devotees. Therefore, we
had the oportunity to have a very close relationship with each other.
Although he was the leader of Maypur, he was very humble and caring. Soon
after I joinded ISKCON in Mayapur, once, I had a little disagreement with a
devotee and it so happened that at that time I had to go to my father's
place to take care of some affiars. Jayapataka Maharaja was away from
Mayapur at that time. So, when he came back and got to know about that
immediately went to Calcutta to bring me back. Unfortunately, when he came
to my house I was not at home - I was visiting some friends to preach to
them. When I came back at night, my father told me that one sannyasi named
Jayapataka Swami came a few times looking for me. I felt so guilty that the
next morning, very early, long before mangala arati, I went to the Calcutta
temple and met him. He was naturally very pleased to see me and right after
mangala arati we left for Mayapur.

That incidence made him so concerned about me that soon after our return to
Mayapur, when he was scheduled to go out on a preaching tour of North
Bengal, he insisted that I also went along with him. I was naturally very
excited to have this wonderful opportunity, and that was the first time I
got the taste of book distribution. At the begining I was not so good at it,
however, Jayapataka Maharaja painstakingly taught me how to convince people
to take Srila Prabhupada's books.

When Bhavananda Prabhu, a sannyasi and co-director of Mayapur with
Jayapataka Maharaja at that time, took me to Srila Prabhupda and introduced
me to His Divine Grace, Jayapataka Maharaja also was there, and he spoke
very highly of me and my service attitude. That must have pleased Srila
Prabhupda very much and right there he gave me the service to translate his
books in to Bengali.

In those days we used to do so many things together. We used to go for a
swim in the Ganga together. We used to take prasadam together. We used to
distribute books together. Indulge in all kinds of Krsna Conscious games and
sports together. He was so full of energy and enthusiasm. He was the best in
whatever he did. He was our natural leader - when he was there we knew that
there was nothing to worry about. When a devotee was about to get drowned in
Ganga he saved him. When there was a threat of the dacoits attacking
Mayapur, he was there in front of everyone to confront them. When there was
a possibility of losing  a wrestling bout with our opponents from some other
temple he was there to uphold the honor of Mayapur. And whenever a devotee
had any spiritual difficulty he was there to reassure him and enliven him.
He had always been an ideal leader.

I feel extremely fortunate to have such a wonderful Vaisnava as my
God-brother and friend. I wish that he stays with us for a long, long time
and continues to shower his mercy upon us.