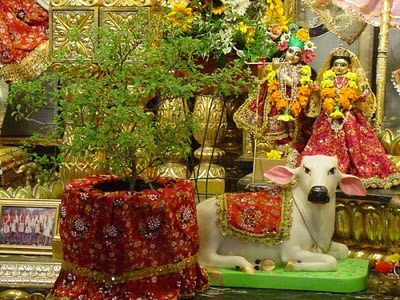 It is stated in the Garuda Purana, " O great bird, the result one obtains by giving ten thousand cows in charitycan be obtained by offering only one tulasi leaf to the Supreme Lord during the month of Karttika. "(Sri Hari- Bhakti- Vilasa ).It is stated in the Padma Purana, " My dear son, for those who worship Lord Janardana with offerings of Tulasileaves during the entire month of Karttika- all of their sinful reactions that were accumulated during the pastten thousand lifetimes are eradicated. The merit one achieves by performing one hundred horse sacrifices andgiving a huge quantity of jewels and other valuable things in charity can be achieved simply by worshipping LordKeshava with offerings of Tulasi leaves during the month of Karttika."(Sri Hari- Bhakti- Vilasa ).

Tags: benefit, in, karttika‏, month, of, some, the, tulasi, worshipping
Email me when people reply –
Follow