Q 218. HOW SHOULD A DISCIPLE SERVE THE SPIRITUAL MASTER ? part 1.

A.  BY SRILA  PRABHUPADA. 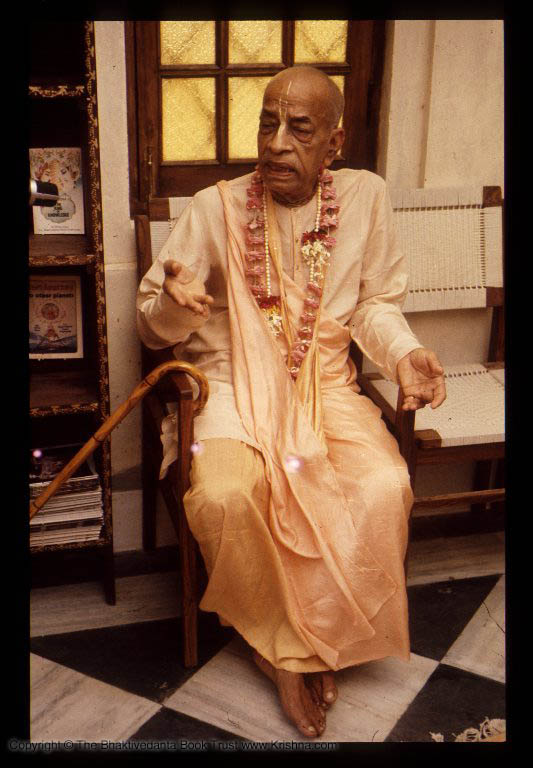 tatra bhāgavatān dharmānśikṣed gurv-ātma-daivataḥamāyayānuvṛttyā yaistuṣyed ātmātma-do hariḥSYNONYMStatra — there (in the association of the spiritual master); bhāgavatān dharmān — the science of devotional service; śikṣet — should learn; guru-ātma-daivataḥ —he for whom the spiritual master is his very life and worshipable deity; amāyayā — without deceit; anuvṛttyā — by faithful service; yaiḥ — by which (devotional science); tuṣyet — can be satisfied; ātmā — the Supreme Soul; ātma-daḥ — who bestows His own self; hariḥ — Lord Hari.TRANSLATIONAccepting the bona fide spiritual master as one's life and soul and worshipable deity, the disciple should learn from him the process of pure devotional service. The Supreme Personality of Godhead, Hari, the soul of all souls, is inclined to give Himself to His pure devotees. Therefore, the disciple should learn from the spiritual master to serve the Lord without duplicity and in such a faithful and favourable way that the Supreme Lord, being satisfied, will offer Himself to the faithful disciple. (Srimad Bhagavatam).PURPORTAccording to Śrīla Śrīdhara Svāmī the Lord's tendency to give Himself to His pure devotee is demonstrated in the case of Bali Mahārāja, who sacrificed his universal kingdom for the pleasure of Lord Vāmana deva. Lord Vāmana was so pleased by the selfless surrender of Bali Mahārāja that the Lord became the doorman in the palace of Bali who was reinstalled as a great leader in the universe.Śrīla Jīva Gosvāmī comments that the spiritual master is to be considered the ātmā, or the very life, of the disciple, since real life begins when one is initiated by a bona fide spiritual master. Although one may experience many seemingly wonderful or important events in a dream, one's real life begins when he wakes up.Similarly, since the spiritual master gives birth to the disciple by awakening him to spiritual life, a bona fide disciple understands that his spiritual master is the very basis of his life.According to Śrīla Jīva Gosvāmī, the Supreme Personality of Godhead is the reservoir of all pleasure, and thus the Lord's giving Himself to a pure devotee indicates that such a devotee becomes immersed in the highest possible ecstasy. In this connection there is the following śruti-mantra:ānandād dhīmāni bhūtānijāyante. "Indeed, it is from the all-blissful Supreme that all these creatures have come into being." Śrīla Viśvanātha Cakravartī Ṭhākura has further pointed out that when the Lord bestows His own self upon a pure devotee such a fortunate devotee can actually see the Lord, touch Him and directly engage in His service.According to Śrīla Bhaktisiddhānta Sarasvatī Ṭhākura, one should never consider one's spiritual master to be mundane or on an equal level with one's self. One should see the spiritual master as being always under the shelter of the lotus feet of the Supreme Lord.One should never try to engage the spiritual master in one's personal service with the mentality of lording it over the spiritual master and attaining through him some material gain. One who is actually advancing will become more and more eager to serve the spiritual master, and thus such a disciple experiences the pleasure of the Supreme Personality of Godhead.Śrīla Rūpa Gosvāmī has delineated four preliminary requisites for advancement for the sincere disciple:guru-pādāśrayas tasmātkṛṣṇa-dīkṣādi-śikṣaṇamviśrambheṇa guroḥ sevāsādhu-vartmānuvartanam"[1] Accepting the shelter of the lotus feet of a bona fide spiritual master, [2] becoming initiated by the spiritual master and learning how to discharge devotional service from him, [3] obeying the orders of the spiritual master with faith and devotion, and [4] following in the footsteps of great ācāryas [teachers] under the direction of the spiritual master." (Bhakti-rasāmṛta-sindhu 1.2.74) One who has executed these preliminary duties is qualified to relish Śrīmad-Bhāgavatam.When one actually hears the sound vibration of Śrīmad-Bhāgavatam as it is, he becomes free from the desire for sense gratification and mental speculation and is happy and satisfied in the service of Lord Kṛṣṇa.yasyāḿ vai śrūyamāṇāyāḿkṛṣṇe parama-pūruṣebhaktir utpadyate puḿsaḥśoka-moha-bhayāpahāSYNONYMSyasyām — this Vedic literature; vai — certainly; śrūyamāṇāyām — simply by giving aural reception; kṛṣṇe — unto Lord Kṛṣṇa; parama — supreme; pūruṣe — unto the Personality of Godhead; bhaktiḥ — feelings of devotional service; utpadyate — sprout up; puḿsaḥ — of the living being; śoka — lamentation; moha — illusion; bhaya — fearfulness; apahā — that which extinguishes.TRANSLATIONSimply by giving aural reception to this Vedic literature, the feeling for loving devotional service to Lord Kṛṣṇa, the Supreme Personality of Godhead, sprouts up at once to extinguish the fire of lamentation, illusion and fearfulness. (Srimad Bhagavatam).One should hear Śrīmad-Bhāgavatam from a bona fide spiritual master who can expertly engage the propensity for loving Kṛṣṇa that arises from hearing the transcendental sound of the Bhāgavatam. Such a transcendental, authorized engagement is called bhāgavata-dharma.Within the International Society for Krishna Consciousness there are many thousands of authorized engagements pertaining to the Society's missionary activities. And by hearing the Śrīmad-Bhāgavatam and performing such engagements the Society's members feel relief from śoka (lamentation), moha (illusion) and bhaya (fear).According to Śrīla Bhaktisiddhānta Sarasvatī Ṭhākura, those who have achieved a mature understanding of the transcendental sound vibration of Śrīmad-Bhāgavatam may adopt the order of tridaṇḍi-sannyāsa, as described in the Haḿsa-gītā, the Thirteenth Chapter of this canto. A so-called Vaiṣṇava who whimsically neglects the strict control of the body, mind and speech cannot actually achieve shelter at the lotus feet of a bona fide spiritual master. Even if such a whimsical sense enjoyer makes a show of assuming the dress and daṇḍa of Vaiṣṇava sannyāsa, he will not attain the desired result, love of Kṛṣṇa.A bona fide Vaiṣṇava should work earnestly to free himself from any tinge of sense gratification and mental speculation, and with a loving heart he should carry out the orders of his bona fide spiritual master. By always remembering the exalted position of the bona fide spiritual master, the disciple will achieve shelter at the lotus feet of Kṛṣṇa.