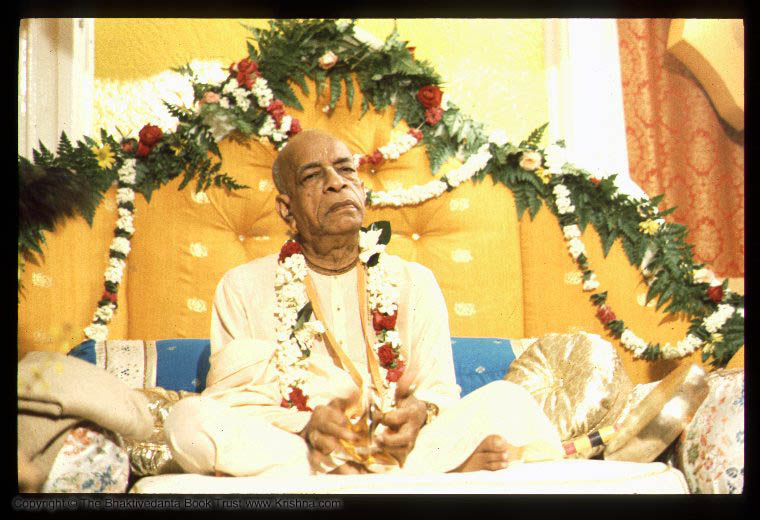 There are no hard and fast rules for chanting the Hare Krishna maha-mantra.

One can chant anywhere, anytime, in any situation.

In fact, the Caitanya-caritamrta (Antya-lila, 20.18) describes that chanting the holy name at any time or place, even during sleep or while eating, brings one all perfection. However, there are different stages of chanting.

The proper way to chant is to give up all of our internal thoughts.

It is almost impossible to meditate on the void and empty our mind of all thinking.

Our mind is always being pulled here and there by something.

But the chanting process is easy because we simply concentrate on the mantra.

However, our meditation on the mantra will be most effective if we can avoid the internal dialogue we always have within our mind.

We should not be chanting while we make plans for the day, or while focusing our attention on other things.

The maha-mantra is the Supreme in the incarnation of sound.

Therefore, we must chant with complete respect and veneration.

We must give the mantra our full attention, otherwise it is offensive.

The process is to simply chant and hear. That is all. If we can do that, then we will make rapid progress and quickly attain the second stage of chanting, which is the offenseless stage.

As one progresses through the second stage, a person begins to get a taste for the chanting, and begins to feel the nectar of joy and bliss within the names.

As a person enters the third or pure stage of chanting, the layers of ignorance that keeps one from realizing their spiritual identity are peeled away.

At the fullest point, one gains direct perception of their spiritual identity and relationship with God, and is immediately liberated while still in the material body.

The Lord reveals Himself to such a sincere devotee and the devotee relishes the taste of transcendental life.

As Srila Rupa Gosvami states in his Sri Upadesamrita (text 7), everything about Krishna is spiritually sweet, such as His names, qualities, and activities.

But one who suffers from the disease of ignorance cannot taste this sweetness.

Yet by chanting the names everyday, a person can destroy this disease and relish the natural sweetness of Krishna's names.

The chanting of the Hare Krsna mantra
is a transcendental vibration;
it is not a material thing.
It is imported from
the transcendental abode of Krsna.
From there the transcendental
sound of Hare Krsna has come.
This sound is like the
sunshine coming from the sun.
Although we cannot go to the sun -
it is far, far beyond our reach
- we can understand that
the sunshine is coming from the sun globe.
There is no doubt about it.
Similarly, the vibration
of the Hare Krsna mantra
is coming from Krsna`s planet,
Goloka (golokera prema-dhana).
And this chanting produces love of Krsna.
(Prema-dhana means
" the treasure of love for krsna").

Chanting Hare Krsna is the only remedy
to relieve the heart from the burning poison
of sense gratification.

One may give cows in charity on the day of a solar eclipse;
one may reside in Prayaga on the banks of the Ganga for a kalpa;
or one may perform thousands of yajnas, and give in
charity a mountain of gold as high as Mount Sumeru.
Still, all these cannot even be compared with
a one-hundredth particle of sri-govinda-kirtana.

Suddha-krsna-nama is krsna-nama that has arisen through
undivided bhakti resulting from full faith. Other than that, the
chanting of sri-nama will be experienced as either namabhasa or
nama-aparadha.

Krsna-nama is more merciful than krsna-svarupa. Krsna’s svarupa (form) does not forgive whatever offense is made to Him, but krsna-nama forgives both offenses committed to the svarupa and offenses committed towards Himself. When you take nama, you should understand the namaaparadhas very clearly and try to avoid them, because you cannot chant suddha-nama until you stop committing offenses.

For those infected with nama-aparadha, sri-nama will certainly remove the sin,
provided the sadhakas chant tirelessly and unremittingly. Sri-nama Himself will
effect their deliverance.
(Padma Purana).

It is so difficult to destroy nama-aparadha.
Therefore, one must avoid nama-aparadha
when one chants sri-nama. If one tries hard
to stop committing nama-aparadha,
suddha-nama will manifest very quickly.
One may take sri-nama and chant continually,
with the hairs on his body standing on end
and streams of tears flowing from his eyes,
but it may still be that, because of nama-aparadha,
one is not uttering suddha-nama.
Therefore, sadhakas must give
very special attention to this, otherwise,
they will not be able to chant
suddha-nama (the pure holy name).

Suddha-nama is hari-nama that
is free from the ten kinds of offenses.
There is no consideration of purity or impurity
with regard to pronunciation of the syllables of sri-nama.

There are two kinds of obstacles:
ordinary and great.
Sri-nama that is chanted with
ordinary obstacle is nama-abhasa,
which awards its benefit some time later.
Nama impeded with great obstacle
is nama-aparadha.
This aparadha does not go far away
unless one chants sri-nama constantly.

Ten kinds of nama-aparadha in the Padma Purana:

(1) Criticizing or blaspheming saints and great bhaktas increases terrible offenses towards sri-nama. How can Sri Krsna tolerate blasphemy of great souls who are devoted to sri-nama, and who preach the glories of sri-krsna-nama in this world? Therefore, the first offense is to blaspheme the bhaktas.

(2) In this material world, Sri Visnu’s name, form, qualities, pastimes and so on are all-auspicious for all beings. If one considers them to be material phenomena and different from Sri Visnu Himself, this is detrimental to one’s chanting of sri-hari-nama. It is also nama-aparadha to believe that Siva and the other devas are independent and equal with Sri Visnu.


The other offenses are:

(3) guror avajna: to disrespect sri-guru who knows namatattva by considering him an ordinary, mortal human being, with a body made of the five material elements.

(4) sruti-sastra-nindanam: to blaspheme the Vedas, the Satvatas, the Puranas, and other sastras.

(5) artha-vadah: to think that the glorification of sri-harinama in sastra is an exaggeration.
(6) hari-namni kalpanam: to interpret sri-hari-nama (in a mundane way) or to think that nama Himself is a product of the imagination.

(7) It is certain that one who is engaged in sinful activities on the strength of sri-nama cannot be purified by artificial yoga practices such as yama, niyama, dhyana, and dharana.

(8) It is an offense to think that rituals and pious material activities such as dharma, vrata, tyaga, and homa are equal, or even comparable to Bhagavan’s sri-divya-nama (transcendental name).

(10)One is a nama-aparadhi if, even after hearing the wonderful glories of sri-nama, he does not show love or enthusiasm for chanting sri-nama and clings fast to the material conception, of ‘I’ and ‘mine’; that is to say, “I am this body, composed of blood, flesh and skin, and things relating to this body are mine.”

'One who thinks himself lower than the grass, who is more tolerant than a tree, and who does not expect personal honour but is always prepared to give all respect to others can very easily always chant the holy name of the Lord.'
(CC-3:20:21).

One cannot be situated in the devotional service of the Lord unless one is free from sinful life. This is confirmed in the Bhagavad-gītā (7:28):

"Persons who have acted piously in previous lives and in this life and whose sinful actions are completely eradicated are freed from the duality of delusion, and they engage themselves in My service with determination."

A person who is already cleansed of all tinges of sinful life engages without deviation or duality of purpose in the transcendental loving service of the Lord.

In this age, although people are greatly sinful, simply chanting the Hare Kṛṣṇa mahā-mantra can relieve them from the reactions of their sins. Eka kṛṣṇa-nāme: only by chanting Kṛṣṇa's name is this possible.

This is confirmed in Śrīmad-Bhāgavatam(12:3:51): kīrtanād eva kṛṣṇasya mukta-sańgaḥ.
Sri Caitanya Mahāprabhu has also taught us this. While passing on the road, He used to chant:

If one always chants the holy name of Kṛṣṇa, gradually one is freed from all reactions of sinful life, provided he chants offenselessly and does not commit more sinful activities on the strength of chanting the Hare Kṛṣṇa mantra.

In this way one is purified, and his devotional service causes the arousal of his dormant love of God.

If one simply chants the Hare Kṛṣṇa mantra and does not commit sinful activities and offenses, one's life is purified, and thus one comes to the fifth stage of perfection, or engagement in the loving service of the Lord (premā pum-artho mahān).

O reservoir of all good qualities, just worship Śrī Kṛṣṇa, the purifier of all purifiers, the most exalted of the personalities worshiped by choice poetry. Worship Him with a faithful, unflinching mind, without duplicity and in a highly elevated manner. Thus worship the Lord, whose name is like the sun, for just as a slight appearance of the sun dissipates the darkness of night, so a slight appearance of the holy name of Kṛṣṇa can drive away all the darkness of ignorance that arises in the heart due to greatly sinful activities performed in previous lives. (Śrī Caitanya Caritāmṛta Antya 3.62).

If a devotee once utters the holy name of the Lord, or if it penetrates his mind or enters his ear, which is the channel of aural reception, that holy name will certainly deliver him from material bondage, whether vibrated properly or improperly, with correct or incorrect grammar, or properly joined or vibrated in separate parts. O brāhmaṇa, the potency of the holy name is therefore certainly great. However, if one uses the vibration of the holy name for the benefit of the material body, for material wealth and followers, or under the influence of greed or atheism — in other words, if one utters the name with offenses — such chanting will not produce the desired result very soon. Therefore one should diligently avoid offenses in chanting the holy name of the Lord.
(Śrī Caitanya Caritāmṛta Antya 3.60).

One should constantly perform hari-nama by counting the names properly on a tulasi-mala or in the absence of that, counting on the fingers.

One should always stay far away from offenses.

The purpose of keeping count is for the sadhaka to understand whether his practice of sri-hari-nama is increasing or diminishing.

Tulasi-devi is very dear to Hari, so touching her while taking hari-nama means that hari-nama bestows more benefit.

When one is practicing nama, one should understand that srikrsna-nama is non-different from His svarupa (eternal, intrinsic form).