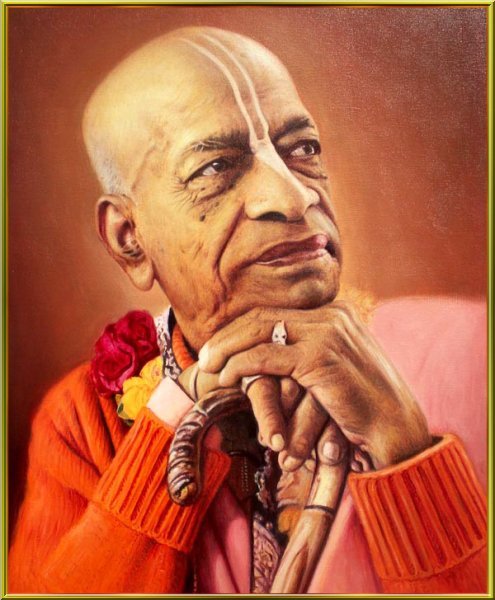 yasya bhaktir bhagavatiharau niḥśreyaseśvarevikrīḍato 'mṛtāmbhodhaukiḿ kṣudraiḥ khātakodakaiḥSYNONYMSyasya — of whom; bhaktiḥ — devotional service; bhagavati — to the Supreme Personality of Godhead; harau — Lord Hari; niḥśreyasa-īśvare — the controller of the supreme perfection of life, or supreme liberation; vikrīḍataḥ — swimming or playing; amṛta-ambhodhau — in the ocean of nectar; kim — what is the use;kṣudraiḥ — with small; khātaka-udakaiḥ — ditches of water.TRANSLATIONA person fixed in the devotional service of the Supreme Lord, Hari, the Lord of the highest auspiciousness, swims in the ocean of nectar. For him what is the use of the water in small ditches? (Srimad Bhagavatam).PURPORTVṛtrāsura has formerly prayed (Bhāg. 6.11.25), na nāka-pṛṣṭhaḿ na ca pārameṣṭhyaḿ na sāma-bhaumaḿ na rasādhipatyam. "I do not want the facilities for happiness on Brahmaloka, Svargaloka or even Dhruvaloka, not to speak of this earth or the lower planets. I simply want to return home, back to Godhead." This is the determination of a pure devotee.A pure devotee is never attracted to any exalted position within this material world. He simply wants to associate with the Supreme Personality of Godhead like the inhabitants of Vṛndāvana — Śrīmatī Rādhārāṇī, the gopīs, Kṛṣṇa's father and mother (Nanda Mahārāja and Yaśodā),Kṛṣṇa's friends and Kṛṣṇa's servants. He wants to associate with Kṛṣṇa's atmosphere of Vṛndāvana's beauty. These are the highest ambitions of a devotee of Kṛṣṇa.Devotees of Lord Viṣṇu may aspire for a position in Vaikuṇṭhaloka, but a devotee of Kṛṣṇa never aspires even for the facilities of Vaikuṇṭha; he wants to return to Goloka Vṛndāvana and associate with Lord Kṛṣṇa in His eternal pastimes. Any material happiness is like water in a ditch, whereas the spiritual happiness eternally enjoyed in the spiritual world is like an ocean of nectar in which a devotee wants to swim.