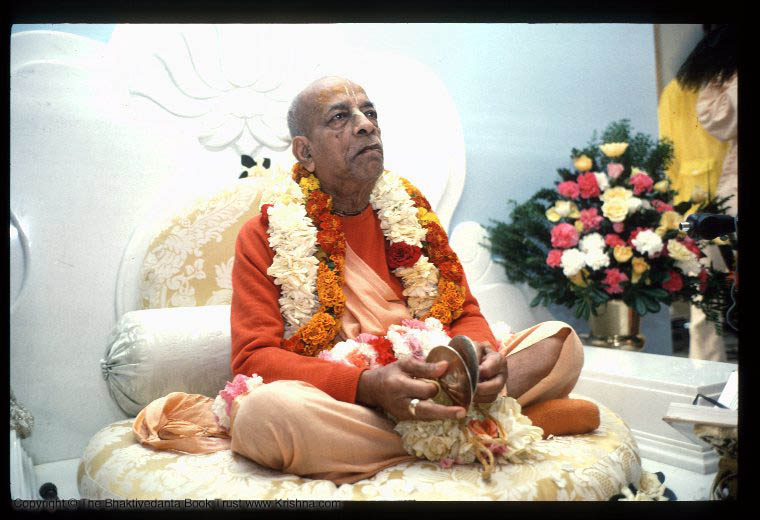 The attitude of the disciple should be to satisfy the bona fide spiritual master.
Then it will be very easy for him to understand spiritual knowledge.
This is confirmed in the Vedas, and Rūpa Gosvāmī will further explain
that for a person who has unflinching faith in God and the spiritual master,
everything becomes revealed very easily. (The Nectar of Devotion).

In the Skanda Purāṇa it is advised that a devotee follow the past ācāryas and
saintly persons, because by such following one can achieve the desired results,
with no chance of lamenting or being baffled in his progress.

In the Nāradīya Purāṇa it is said, "If one is actually very serious about
devotional service, then all of his purposes will be served without any delay."

In the Padma Purāṇa it is stated, "For one who has given up his material
sense enjoyment and has accepted the principles of devotional service,
the opulence of Viṣṇuloka (the kingdom of God) is awaiting."

In the Brahma-vaivarta Purāṇa it is said that one who observes fasting
on Ekādaśī day is freed from all kinds of reactions to sinful activities and
advances in pious life. The basic principle is not just to fast,
but to increase one's faith and love for Govinda, or Kṛṣṇa.

In the Skanda Purāṇa it is directed that a devotee should offer water to
the tulasī plant and āmalaka trees. He should offer respect to the cows
and to the brāhmaṇas and should serve the Vaiṣṇavas by offering them
respectful obeisances and meditating upon them. All of these processes
will help the devotee to diminish the reactions to his past sinful activities.

Lord Caitanya was once asked by one of His householder devotees what
the general behaviour of a Vaiṣṇava should be. In this connection,
Lord Caitanya replied that a Vaiṣṇava should always give up the company
of nondevotees. Then He explained that there are two kinds of non-devotees:
one class is against the supremacy of Kṛṣṇa, and another class is too materialistic.
(The Nectar of Devotion).

In the Padma Purāṇa it is stated, "Persons who are engaged in Kṛṣṇa consciousness
should never be disturbed by some material gain or loss. Even if there is some
material loss, one should not be perturbed, but should always think of Kṛṣṇa
within himself."

A devotee should not be subjected to lamentation or illusion.
In the Padma Purāṇa it is stated, "Within the heart of a person who is overpowered
by lamentation or anger, there is no possibility of Kṛṣṇa's being manifested."

One should not neglect to offer due respect to the demigods. One may not be a
devotee of demigods, but that does not mean that he should be disrespectful to them.
For example, a Vaiṣṇava is not a devotee of Lord Śiva or Lord Brahmā,
but he is duty-bound to offer all respects to such highly positioned demigods.

In the Padma Purāṇa it is stated that even a person whose life is completely sinful
will be completely protected by the Lord if he simply surrenders unto Him.
So it is accepted that one who surrenders unto the Supreme Personality of Godhead
becomes free from all sinful reactions. And even when a person becomes an offender
unto the Supreme Personality of Godhead Himself, he can still be delivered simply
by taking shelter of the holy names of the Lord:
Hare Kṛṣṇa, Hare Kṛṣṇa, Kṛṣṇa Kṛṣṇa, Hare Hare
Hare Rāma, Hare Rāma, Rāma Rāma, Hare Hare.
In other words, the chanting of Hare Kṛṣṇa is beneficial for eradicating all sins,
but if one becomes an offender to the holy names of the Lord,
then he has no chance of being delivered.

In the Padma Purāṇa there is a statement describing how a Vaiṣṇava should decorate
his body with tilaka and beads: "Persons who put tulasī beads on the neck, who mark
twelve places of their bodies as Viṣṇu temples with Viṣṇu's symbolic representations
(the four items held in the four hands of Lord Viṣṇu — conch, mace, disc and lotus),
and who have viṣṇu-tilaka on their foreheads, are to be understood as the devotees
of Lord Viṣṇu in this world. Their presence makes the world purified,
and anywhere they remain, they make that place as good as Vaikuṇṭha."

In the Skanda Purāṇa Lord Brahmā tells Nārada, "My dear Nārada, anyone
who puts on his neck the flower garland which was formerly used by Kṛṣṇa
becomes relieved from all disease and reactions to sinful activities,
and gradually he is liberated from the contamination of matter."

In the Dvārakā-māhātmya the importance of dancing before the Deity is stated
by Lord Kṛṣṇa as follows: "A person who is in a jubilant spirit, who feels profound
devotional ecstasy while dancing before Me, and who manifests different features
of bodily expression can burn away all the accumulated sinful reactions
he has stocked up for many, many thousands of years."

In the Nāradīya Purāṇa there is a statement about bowing down and offering
respect to the Deity. It is said there, "A person who has performed a great ritualistic
sacrifice and a person who has simply offered his respectful obeisances by bowing
down before the Lord cannot be held as equals." The person who has executed many
great sacrifices will attain the result of his pious activities, but when such results
are finished, he has to take birth again on the earthly planet; however,
the person who has once offered respects, bowing down before the Deity,
will not come back to this world, because he will go directly to the abode of Kṛṣṇa.

In the Brahmāṇḍa Purāṇa it is said,
"A person who sees the Lord's Ratha-yātrā
car festival and then stands up to receive the Lord
can purge all kinds of sinful results from his body."

It is stated in the Purāṇas, "Persons who attempt to visit
the holy places of pilgrimage, like Vṛndāvana, Mathurā
or Dvārakā, are actually glorified. By such traveling activities,
they can pass over the desert of material existence."

It is stated in the Hari-bhakti-sudhodaya, "Persons who are impelled
by pure devotional service in Kṛṣṇa consciousness and who therefore
go to see the Deities of Viṣṇu in the temple will surely get relief
from entering again into the prison house of a mother's womb."

It is said in the Hari-bhakti-sudhodaya,
"A person who is circumambulating
the Deity of Viṣṇu can counteract the circumambulation
of repeated birth and death in this material world."

It is stated in the Viṣṇu-rahasya, "Any person who can arrange
for service to the Lord in the same way that a king is given service
by his attendants is surely elevated to the abode of Kṛṣṇa after death."

When a person loudly chants the glories of the Lord's activities, qualities,
form, etc., his chanting is called sańkīrtana.
Sańkīrtana also refers to the congregational
chanting of the holy name of the Lord.

In the Padma Purāṇa there is a statement: "For any person who is chanting
the holy name either softly or loudly, the paths to liberation
and even heavenly happiness are at once open."

In the Skanda Purāṇa there is a statement about submission unto the
lotus feet of the Lord. It is said there that those who are sober devotees
can offer their submission to Kṛṣṇa in the following three ways:
(1) samprārthanātmikā, very feelingly offering prayers;
(2) dainyavodhikā, humbly submitting oneself;
(3) lālasāmayī, desiring some perfectional stage.