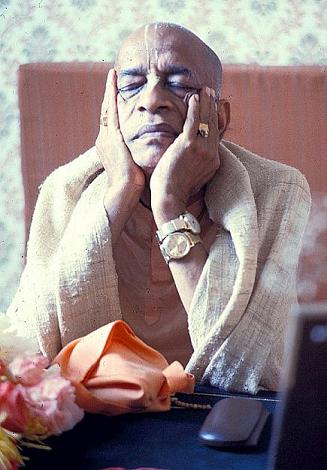 In the Padma Purāṇa, there is a nice statement praising the service of the
Vaiṣṇavas, or devotees. In that scripture Lord Śiva tells Pārvatī, "My dear Pārvatī,
there are different methods of worship, and out of all such methods the worship
of the Supreme Person is considered to be the highest.
But even higher than the worship of the Lord
is the worship of the Lord's devotees."

In the Skanda Purāṇa, it is stated, "Persons whose bodies are marked with tilaka,
symbolizing the conchshell, wheel, club and lotus — and who keep the leaves
of tulasī on their heads, and whose bodies are always decorated
with gopī-candana — even seen once, can help the seer
be relieved from all sinful activities."

In the Ādi Purāṇa, it is stated by Lord Kṛṣṇa Himself, addressed to Arjuna:
"My dear Pārtha, one who claims to be My devotee is not so.
Only a person who claims to be the devotee of My devotee is actually My devotee."
No one can approach the Supreme Personality of Godhead directly.
One must approach Him through His pure devotees. Therefore, in the system of
Vaiṣṇava activities, the first duty is to accept a devotee
as spiritual master and then to render service unto him.

In the Padma Purāṇa it is said, "The Lord may offer liberation or material happiness
to a devotee, but after some devotional service has been executed,
particularly in Mathurā during the month of Kārttika, the devotees want only
to attain pure devotional service unto the Lord."

It is said in the Ādi Purāṇa, "A person who is constantly engaged in chanting the
holy name and who feels transcendental pleasure, being engaged in devotional
service, is certainly awarded the facilities of devotional service
and is never given just mukti (liberation)."

Mukti means liberation from material contamination; when liberated,
one does not have to take birth again in the material world.
(The Nectar of Devotion).

According to Śrīmad-Bhāgavatam, mukti is only the beginning of one's becoming
situated in his normal condition. The normal condition of every living entity
is to be engaged in the devotional service of the Lord.

Śrīmad-Bhāgavatam is the desire tree of Vedic wisdom.
Veda itself means "the aggregate of knowledge."
And whatever knowledge is required for human society
is perfectly presented in Śrīmad-Bhāgavatam.

Śrīmad-Bhāgavatam is considered to be the ripened fruit
of this desire-fulfilling tree of the Vedas. A tree is honoured by the production of its fruit.
For example, a mango tree is considered very valuable because it produces the king
of all fruits, the mango. When the mango fruit becomes ripened it is the greatest gift
of that tree, and Śrīmad-Bhāgavatam is similarly held to be the ripened fruit of
the Vedic tree. And as ripened fruit becomes more relishable when first touched by
the beak of a parrot, or śuka, Śrīmad-Bhāgavatam has become more relishable
by being delivered through the transcendental mouth of Srila Śukadeva Gosvāmī.

Śrī Caitanya Mahāprabhu recommended that one learn Śrīmad-Bhāgavatam from
the mouth of the self-realized person called bhāgavatam. Bhāgavata means
"in relationship with the Personality of Godhead [Bhagavān]." So the devotee is
sometimes called bhāgavatam, and the book which is in relationship with
devotional service to the Supreme Personality of Godhead is also
called Bhāgavatam. Śrī Caitanya Mahāprabhu recommended that, in order to
relish the real taste of Śrīmad-Bhāgavatam, one should take
instruction from the person bhāgavatam.

Śrīmad-Bhāgavatam is relishable even by a liberated person. Srila Śukadeva
Gosvāmī admitted that although he was liberated from within the very womb
of his mother, it was only after relishing Śrīmad-Bhāgavatam that he
became a great devotee. Thus, one who is desirous of advancing in Kṛṣṇa
consciousness should relish the purport of Śrīmad-Bhāgavatam
through the discussions of authorized devotees.

It is stated in the Ādi Purāṇa by Kṛṣṇa. While addressing Arjuna He says,
"Anyone who is engaged in chanting My transcendental name must be
considered to be always associating with Me. And I may tell you frankly
that for such a devotee I become easily purchased."

In the Padma Purāṇa it is stated, "The chanting of the Hare Kṛṣṇa mantra
is present only on the lips of a person who
has for many births worshipped Vāsudeva."

It is said in the Padma Purāṇa, "There is no difference between the holy
name of the Lord and the Lord Himself. As such, the holy name is as
perfect as the Lord Himself in fullness, purity and eternity. The holy name
is not a material sound vibration, nor has it any material contamination."

The holy name cannot, therefore, be chanted offenselessly by one who
has failed to purify his senses. In other words, materialistic senses cannot
properly chant the holy names of the Hare Kṛṣṇa mahā-mantra. But by
adopting this chanting process, one is given a chance to actually
purify himself, so that he may very soon chant offenselessly.
(The Nectar of Devotion).

Lord Caitanya Mahāprabhu has recommended that everyone chant the
Hare Kṛṣṇa mantra just to cleanse the dust from the heart. If the dust of the
heart is cleansed away, then one can actually understand the importance of
the holy name.

For persons who are not inclined to clean the dust from their
hearts and who want to keep things as they are, it is not possible to derive
the transcendental result of chanting the Hare Kṛṣṇa mantra.
(The Nectar of Devotion).

One should, therefore, be encouraged to develop his service attitude toward
the Lord, because this will help him to chant without any offense. And so,
under the guidance of a spiritual master, the disciple is trained to render
service and at the same time chant the Hare Kṛṣṇa mantra.
(The Nectar of Devotion).

As soon as one develops his spontaneous service attitude, he can
immediately understand the transcendental nature of
the holy names of the mahā-mantra.
(The Nectar of Devotion).