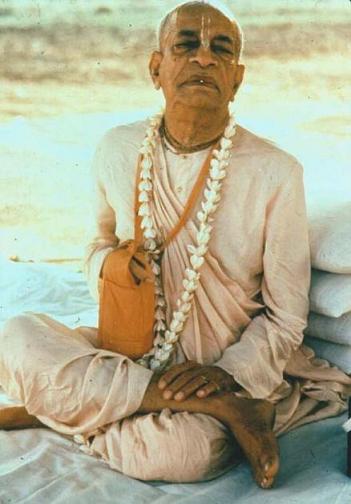 In Bhagavad-gītā the Lord Himself said, "One can understand Me
only through devotional service." In beginning His teaching of the
Bhagavad Gītā, the Lord said to Arjuna, "Because you are My devotee,
I shall teach these secrets to you." Vedic knowledge means ultimately
to understand the Supreme Lord, and the process of entering into
His kingdom is devotional service.

In the Śrīmad-Bhāgavatam, Lord Kṛṣṇa says, "My dear Uddhava, for persons
who are seriously engaged in My service, the cultivation of philosophical
speculation and artificial renunciation are not very favourable. When a person
becomes My devotee he automatically attains the fruits of the renunciation
of material enjoyment, and he gets sufficient knowledge to understand the
Absolute Truth." That is the test of advancement in devotional service.
A devotee cannot be in darkness, because the Lord shows him
special favour and enlightens him from within.

In the Śrīmad-Bhāgavatam the Lord further instructs Uddhava, "My dear friend,
the profits derived from fruitive activities, austerities, the culture of philosophical
knowledge, renunciation, the practice of mystic yoga, charity and all similar
auspicious activities are automatically achieved by My devotees — those who are
simply attached to Me by loving service. These devotees have everything
at their disposal, but they desire nothing outside of My devotional service.

There is a story in the Skanda Purāṇa about a hunter who was converted into
a great devotee under the instruction of Nārada Muni. When the hunter became
a perfect devotee, he was not prepared to kill even an ant. Parvata Muni, a friend
of Nārada's, saw the wonderful transformation of the hunter by devotional service
and remarked, "My dear hunter, your unwillingness to kill even an ant is not very
astonishing. Any person who develops the devotional attitude has all the good
qualities automatically manifested in his person. A devotee is never a cause
of distress to anyone."

Śrī Rūpa Gosvāmī said that there are nine different kinds of devotional service,
which are listed as hearing, chanting, remembering, serving, worshiping the Deity
in the temple, praying, carrying out orders, serving Kṛṣṇa as a friend and sacrificing
everything for Him. Each and every one of these processes is so powerful that if
anyone follows even one single one of them, he can achieve the desired perfection
without fail. For example, if one is attached simply to hearing about the Lord and
another is attached to chanting the glories of the name, both will achieve
their desired goal in devotional service.
(The Nectar of Devotion).

In the Śrīmad-Bhāgavatam there is a statement by Nārada Muni to Yudhiṣṭhira:
There Nārada says, "My dear King, there are many devotees who first become
attracted to the Personality of Godhead for purposes of sense gratification,
from being envious of Him, out of fear of Him or from desiring to associate
affectionately with Him. Ultimately these attractions become freed from all
material contamination, and gradually the worshipper develops spiritual love
and achieves that ultimate goal of life desired by the pure devotee."

In the Brahmāṇḍa Purāṇa it is stated, "Those who have achieved liberation from
material contamination and those who are demons and are killed by the
Supreme Personality of Godhead become absorbed in the Brahman concept of life
and reside in the spiritual sky of the brahmajyoti." That spiritual sky is far beyond
the material sky, and it is confirmed also in Bhagavad-gītā that beyond this
material sky there is another, eternal sky. The enemies and the impersonalists may
be allowed to enter into this Brahman effulgence, but the devotees of Kṛṣṇa are
promoted all the way to the spiritual planets. Because the pure devotees have
developed their spontaneous love for the Supreme Personality of Godhead,
they are allowed to enter into the spiritual planets to enjoy spiritual bliss
in association with the Supreme Personality of Godhead.

The "lusty attitude" of the gopīs does not refer to any sort of sex indulgence.
Śrīla Rūpa Gosvāmī explains that this "lusty desire" refers to the devotee's
particular attitude of association with Kṛṣṇa. Every devotee in his perfectional stage
has a spontaneous attraction to the Lord. This attraction is sometimes called the
"lusty desire" of the devotee. The lust is the devotee's excessive desire to serve the
Lord in a particular capacity. Such a desire may seem to be a desire for enjoying
the Lord, but actually the endeavour is to serve the Lord in that capacity. For example,
a devotee may be desiring to associate with the Personality of Godhead as His
cowherd friend. He will want to serve the Lord by assisting Him in controlling
the cows in the pasturing ground. This may appear to be a desire to enjoy the
company of the Lord, but actually it is spontaneous love, serving Him by
assisting in managing the transcendental cows.
(The Nectar of Devotion).

Great devotees up to the standard of Uddhava are very dear friends of the Lord,
and they desire to follow in the footsteps of the gopīs. So the gopīs' love for
Kṛṣṇa is certainly not material lusty desire. Otherwise, how could Uddhava aspire
to follow in their footsteps? Another instance is Lord Caitanya Himself. After
accepting the sannyāsa order of life, He was very, very strict about avoiding
association with women, but still He taught that there is no better method of
worshiping Kṛṣṇa than that conceived by the gopīs. Thus the gopīs' method of
worshipping the Lord as if impelled by lusty desire was praised very highly even
by Śrī Caitanya Mahāprabhu. This very fact means that although the attraction
of the gopīs for Kṛṣṇa appears to be lusty, it is not in the least bit material.
Unless one is fully situated in the transcendental position, the relationship of
the gopīs with Kṛṣṇa is very difficult to understand.
(The Nectar of Devotion).