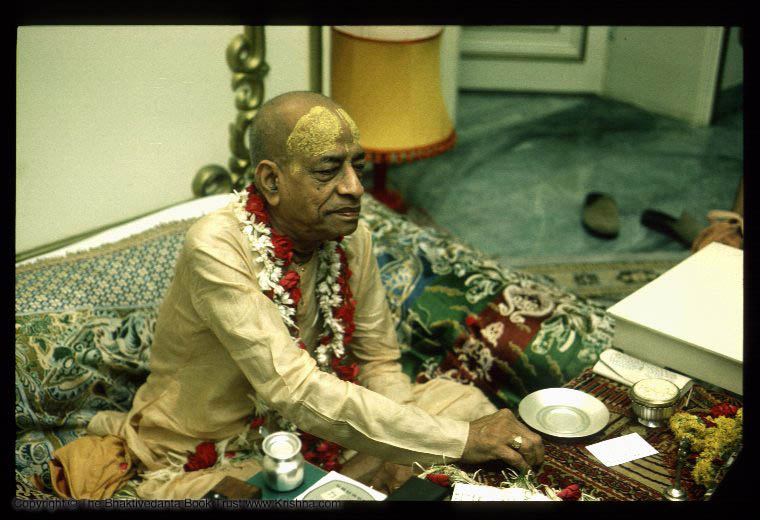 Śuddha-bhakti, the activity of the soul proper, in other words,
engagement in the transcendental loving service of the Lord,
is performed in a liberated condition.
(The Nectar of Instruction).

"One who engages in full devotional service,
who does not fall down in any circumstance,
at once transcends the modes of material nature
and thus comes to the level of Brahman."
(B.G.14:26).

Being situated in his original Kṛṣṇa conscious position,
a pure devotee does not identify with the body.
Such a devotee should not be seen from a materialistic point of view.
Indeed, one should overlook a devotee's having a body born in a low family,
a body with a bad complexion, a deformed body, or a diseased or infirm body.
According to ordinary vision, such imperfections may seem prominent in
the body of a pure devotee, but despite such seeming defects,
the body of a pure devotee cannot be polluted.
It is exactly like the waters of the Ganges,
which sometimes during the rainy season are full of bubbles, foam and mud.
The Ganges waters do not become polluted.
Those who are advanced in spiritual understanding will bathe in the Ganges
without considering the condition of the water.
(The Nectar of Instruction).

The holy name, character, pastimes and activities of Kṛṣṇa
are all transcendentally sweet like sugar candy.
Although the tongue of one afflicted by the jaundice of avidyā (ignorance)
cannot taste anything sweet, it is wonderful that simply by carefully chanting
these sweet names every day, a natural relish awakens within his tongue,
and his disease is gradually destroyed at the root.
(The Nectar of Instruction).

When a man in the material world takes more interest in the materialistic way of life
than in Kṛṣṇa consciousness, he is considered to be in a diseased condition.
The normal condition is to remain an eternal servant of the Lord
(jīvera 'svarūpa' haya — kṛṣṇera 'nitya-dāsa' -CC: Madhya 20.108).
This healthy condition is lost when the living entity forgets Kṛṣṇa
due to being attracted by the external features of Kṛṣṇa's māyā energy.
(The Nectar of Instruction).

The real disease is in the heart. If the mind is cleansed, however,
if consciousness is cleansed, a person cannot be harmed by the material disease.
To cleanse the mind and heart from all misconceptions,
one should take to this chanting of the Hare Kṛṣṇa mahā-mantra.
This is both easy and beneficial. By chanting the holy name of the Lord,
one is immediately freed from the blazing fire of material existence.
(The Nectar of Instruction).

When a person is relieved from unwanted things, he becomes fixed in
executing his Kṛṣṇa activities. Indeed, he becomes attached to such activities
and experiences ecstasy in executing devotional service. This is called bhāva,
the preliminary awakening of dormant love of Godhead.
Thus the conditioned soul becomes free from material existence
and loses interest in the bodily conception of life, including material opulence,
material knowledge and material attraction of all variety. At such a time
one can understand who the Supreme Personality of Godhead is and what His maya is.
(The Nectar of Instruction).

Although māyā may be present, it cannot disturb a devotee
once he attains the bhāva stage. This is because the devotee
can see the real position of māyā. Māyā means forgetfulness of Kṛṣṇa,
and forgetfulness of Kṛṣṇa and Kṛṣṇa consciousness stand side by side
like light and shadow. If one remains in shadow, he cannot enjoy
the facilities offered by light, and if one remains in light,
he cannot be disturbed by the darkness of shadow.
By taking to Kṛṣṇa consciousness, one gradually becomes liberated
and remains in light. Indeed, he does not even touch the darkness.
(The Nectar of Instruction).

"Kṛṣṇa is compared to sunshine, and māyā is compared to darkness.
Wherever there is sunshine, there cannot be darkness.
As soon as one takes to Kṛṣṇa consciousness,
the darkness of illusion, the influence of the external energy,
will immediately vanish."
(CC-Madhya 22.31).

"After many births and deaths, he who is actually in knowledge
surrenders unto Me, knowing Me to be the cause of all causes and all that is.
Such a great soul is very rare." (B.G.7:19).

Actually a person is wise when he surrenders
unto the lotus feet of Kṛṣṇa, but such a mahātmā,
great soul, is very rare.
(The Nectar of Instruction).

After taking to devotional service under the regulative principles,
a person may come to the platform of spontaneous love of Godhead,
following in the footsteps of great devotees like Nārada and Sanaka and Sanātana.
The Supreme Personality of Godhead then recognizes him to be superior.
The devotees who have developed love of Godhead are certainly in an exalted position.
(The Nectar of Instruction).

Of all these devotees, the gopīs are recognized as superior because
they do not know anything other than satisfying Kṛṣṇa.
Nor do the gopīs expect any return from Kṛṣṇa. Indeed, sometimes
Kṛṣṇa puts them into extreme suffering by separating Himself from them.
Nonetheless, they cannot forget Kṛṣṇa. When Kṛṣṇa left Vṛndāvana for Mathurā,
the gopīs became most dejected and spent the rest of their lives
simply crying in separation from Kṛṣṇa. This means that in one sense
they were never actually separated from Kṛṣṇa.
(The Nectar of Instruction).

There is no difference between thinking of Kṛṣṇa and associating with Him.
Rather, vipralambha-sevā, thinking of Kṛṣṇa in separation,
as Śrī Caitanya Mahāprabhu did, is far better than serving Kṛṣṇa directly.
Thus of all the devotees who have developed unalloyed devotional love for Kṛṣṇa,
the gopīs are most exalted, and out of all these exalted gopīs,
Śrīmatī Rādhārāṇī is the highest.
(The Nectar of Instruction).