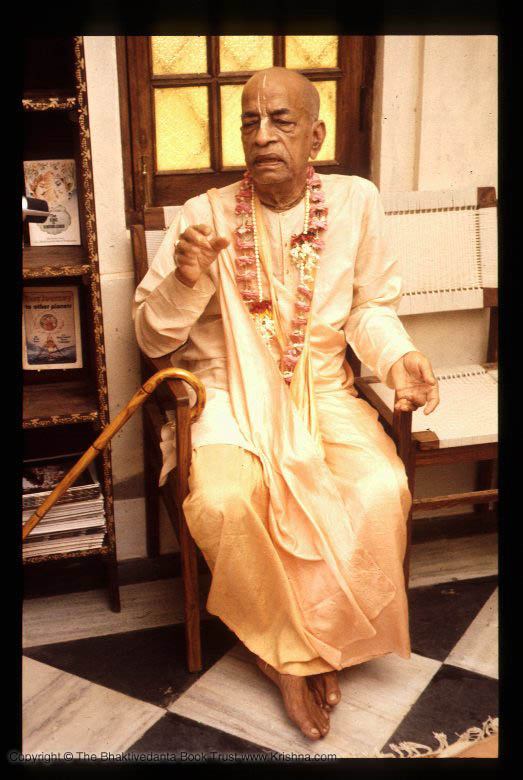 Persons desiring to follow in the footsteps of such eternal devotees of the Lord
as the Vṛṣṇis and Vṛndāvana denizens are called rāgānugā devotees, which
means that they are trying to attain to the perfection of those devotees.
These rāgānugā devotees do not follow the regulative principles of
devotional service very strictly, but by spontaneous nature they become
attracted to some of the eternal devotees such as Nanda or Yaśodā, and they
try to follow in their footsteps spontaneously. There is a gradual development
of the ambition to become like a particular devotee,
and this activity is called rāgānugā.
(The Nectar of Devotion).

We must always remember, however, that such eagerness to follow in the footsteps
of the denizens of Vraja (Vṛndāvana) is not possible unless one is freed from
material contamination. In following the regulative principles of devotional service,
there is a stage called anartha-nivṛtti, which means the disappearance
of all material contamination.
(The Nectar of Devotion).

It is said by Śrī Rūpa Gosvāmī, "When one is actually liberated from material
contamination, he can always remember an eternal devotee in Vṛndāvana in
order to love Kṛṣṇa in the same capacity. And developing such an aptitude,
one will always live in Vṛndāvana, even within his mind." The purport is that
if it is possible one should go and physically be present at Vrajabhūmi,
Vṛndāvana, and be engaged always in the service of the Lord, following the
devotees inVraja-dhāma, the spiritual realm of Vraja. If it is not possible,
however, to be physically present at Vṛndāvana, one can meditate anywhere
upon living in that situation. Wherever he may be, one must always think
about life in Vraja-dhāma and about following in the footsteps of a particular
devotee in the service of the Lord.
(The Nectar of Devotion).

A devotee who is actually advanced in Kṛṣṇa consciousness, who is constantly
engaged in devotional service, should not manifest himself, even though he has
attained perfection. The idea is that he should always continue to act as a
neophyte devotee as long as his material body is there. Activities in devotional
service under regulative principles must be followed even by the pure devotee.
But when he realizes his actual position in relationship with the Lord, he can,
along with the discharging of regulative service, think within himself of
the Lord, under the guidance of a particular associate of the Lord, and develop
his transcendental sentiments in following that associate.
(The Nectar of Devotion).

Devotional service following in the footsteps of the gopīs of Vṛndāvana or the
queens at Dvārakā is called devotional service in conjugal love. This devotional
service in conjugal love can be divided into two categories. One is indirect
conjugal love, the other direct. In both of these categories, one has to follow
the particular gopī who is engaged in such service in Goloka Vṛndāvana.
To be directly attached to the Supreme Personality of Godhead in conjugal
love is technically called keli. This keli performance means to directly join
with the Supreme Personality of Godhead. There are other devotees who do
not wish direct contact with the Supreme Person, but who relish the conjugal
love affairs of the Lord with the gopīs. Such devotees enjoy simply by
hearing of the activities of the Lord with the gopīs.
(The Nectar of Devotion).

This development of conjugal love can be possible only with those who are
already engaged in following the regulative principles of devotional service,
specifically in the worship of Rādhā and Kṛṣṇa in the temple. Such devotees
gradually develop a spontaneous love for the Deity, and by hearing of the
Lord's exchange of loving affairs with the gopīs, they gradually become
attracted to these pastimes.
(The Nectar of Devotion).

This development of conjugal love for Kṛṣṇa is not manifested in women only.
The material body has nothing to do with spiritual loving affairs. A woman
may develop an attitude for becoming a friend of Kṛṣṇa, and, similarly,
a man may develop the feature of becoming a gopī in Vṛndāvana.
How a devotee in the form of a man can desire to become a gopī is stated
in the Padma Purāṇa as follows: In days gone by there were many sages
in Daṇḍakāraṇya. Daṇḍakāraṇya is the name of the forest where Lord
Rāmacandra lived after being banished by His father for fourteen years.
At that time there were many advanced sages who were captivated by
the beauty of Lord Rāmacandra and who desired to become women in
order to embrace the Lord. Later on, these sages appeared in Goloka
Vṛndāvana when Kṛṣṇa advented Himself there, and they were born as
gopīs, or girl friends of Kṛṣṇa. In this way they
attained the perfection of spiritual life.
(The Nectar of Devotion).

In the Mahā-kūrma Purāṇa it is stated, "Great sages who were the sons of
fire-gods rigidly followed the regulative principles in their desire to have
conjugal love for Kṛṣṇa. As such, in their next lives they were able to
associate with the Lord, the origin of all creation, who is known as
Vāsudeva, or Kṛṣṇa, and all of them got Him as their husband."
(The Nectar of Devotion).

Devotees who are attracted to Kṛṣṇa as parents or as friends should follow
in the footsteps of Nanda Mahārāja or Subala, respectively. Nanda Mahārāja
is the foster father of Kṛṣṇa, and out of all of the friends of Kṛṣṇa,
Subala is the most intimate in Vrajabhūmi.
(The Nectar of Devotion).

In the development of becoming either the father or friend of the Lord,
there are two varieties. One method is that one may try to become the
father of the Lord directly, and the other is that one may follow Nanda
Mahārāja and cherish the ideal of being Kṛṣṇa's father. Out of these two,
the attempt to directly become the father of Kṛṣṇa is not recommended.
(The Nectar of Devotion).

Elevation to the ecstatic stage of life is generally attained through association
with pure devotees, while elevation to that stage by the special
mercy of Kṛṣṇa or His devotee is very rare.
(The Nectar of Devotion).

The purport is that one should execute devotional service rigidly in the
association of devotees so that there will be certainty in raising oneself to
that ecstatic position. In special cases, of course, there is special favour
from Kṛṣṇa, and although we should always expect that, we should not
sit idly and simply wait for Kṛṣṇa's special mercy;
the regular duties must be performed.
(The Nectar of Devotion).

An example of rising to the stage of ecstatic love by executing the regulative
principles of devotional service is given in the life story of Nārada, which is
described to Vyāsadeva in Śrīmad-Bhāgavatam. Nārada tells there of his
previous life and how he developed to the stage of ecstatic love. He was
engaged in the service of great devotees and used to hear their talks and
songs. Because he had the opportunity to hear these pastimes and songs
of Kṛṣṇa from the mouths of pure devotees, he became very attracted
within his heart. Because he had become so eager to hear these topics,
he gradually developed within himself an ecstatic love for Kṛṣṇa. This
ecstatic love is prior to the pure love of Kṛṣṇa, because in the next verse
Nārada confirms that by the gradual process of hearing from the great
sages he developed love of Godhead.
(The Nectar of Devotion).

These are practical examples of how one can develop to the stage of
ecstatic love simply by the association of pure devotees. It is essential,
therefore, that one constantly associate with pure devotees who are
engaged morning and evening in chanting the Hare Kṛṣṇa mantra.
In this way one will get the chance to purify his heart and develop
this ecstatic pure love for Kṛṣṇa.
(The Nectar of Devotion).