Q. 231. WHAT IS THE BENEFIT OF WORSHIPPING THE LOTUS FEET OF LORD KRISHNA ? part 3.‏ 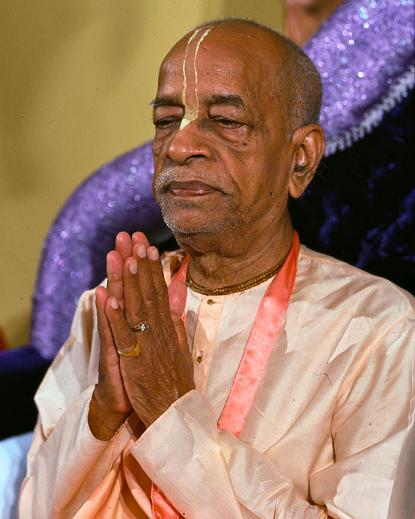 SYNONYMS
tri-bhuvana — of the three worlds comprising the material universe; vibhava-hetave — for the sake of the opulences; api — even; akuṇṭha-smṛtiḥ — whose remembrance is undisturbed; ajita-ātma — of whom the unconquerable Lord is the very soul; sura-ādibhiḥ — by the demigods and others; vimṛgyāt — whichare sought; na calati — he does not go away; bhagavat — of the Supreme Personality of Godhead; pada-aravindāt — from the lotus feet; lava — of eight forty-fifths of one second; nimiṣa — or of three times that; ardham — one half; api — even; yaḥ — who; saḥ — he; vaiṣṇava-agryaḥ — the foremost of devotees of Lord Viṣṇu.

TRANSLATION
The lotus feet of the Supreme Personality of Godhead are sought even by the greatest of demigods, such as Brahmā and Śiva, who have all accepted the Supreme Personality of Godhead as their life and soul. A pure devotee of the Lord can never forget those lotus feet in any circumstance. He will not give up his shelter at the lotus feet of the Lord for a single moment — indeed, not for half a moment — even in exchange for the benediction of ruling and enjoying the opulence of the entire universe. Such a devotee of the Lord is to be considered the best of the Vaiṣṇavas. (Srimad Bhagavatam).

It is simply impossible for a pure devotee to forget the lotus feet of the Personality of Godhead, since everything that exists is in fact an expansion of the Supreme Lord. Since nothing is separate from the Supreme Lord, a pure devotee of the Lord cannot think of anything but the Lord. Nor can a pure devotee contemplate ruling or enjoying universal opulence; even if given all the opulence of the universe, he would immediately offer it at the lotus feet of the Lord and return to his position of a humble servant of the Lord.

The words ajitātma-surādibhir vimṛgyāt are very significant in this verse. The lotus feet of Lord Kṛṣṇa are so opulent that even the lords of all material opulence, namely Brahmā and Śiva, as well as the other demigods, are always searching for a glimpse of the Lord's lotus feet.

The word vimṛgyāt indicates that the demigods are not actually able to see the lotus feet of the Lord, but are endeavouring to see them. An example of this is given in the Tenth Canto when Lord Brahmā offers prayers to Viṣṇu, begging the Lord to rectify the disturbances on the earth.

SYNONYMS
na — not; pārameṣṭhyam — the position or abode of Lord Brahmā; na — never; mahā-indra-dhiṣṇyam — the position of Lord Indra; na — neither;sārvabhaumam — empire on the earth; na — nor; rasa-ādhipatyam — sovereignty in the lower planetary systems; na — never; yoga-siddhīḥ — the eightfoldyoga perfections; apunaḥ-bhavam — liberation; vā — nor; mayi — in Me; arpita — fixed; ātmā — consciousness; icchati — he desires; mat — Me; vinā — without; anyat — anything else.

TRANSLATION
One who has fixed his consciousness on Me desires neither the position or abode of Lord Brahmā or Lord Indra, nor an empire on the earth, nor sovereignty in the lower planetary systems, nor the eightfold perfection of yoga, nor liberation from birth and death. Such a person desires Me alone.

PURPORT
The position of the akiñcana pure devotee is described in this verse. Śrī Priyavrata Mahārāja is an example of a great devotee who was not interested in universal sovereignty because his love was completely absorbed in the lotus feet of the Lord. Even the greatest material enjoyment appears most insignificant and useless to a pure devotee of the Lord.

According to Śrīla Viśvanātha Cakravartī Ṭhākura, the word ajitātmā can also be taken to mean ajitendriyāḥ, or "those whose senses are uncontrolled."

Although the demigods are all to be respected as devotees of Lord Viṣṇu, the absence of gross material discomfort in the higher planetary systems makes them tend to become affected by the bodily concept of life, and sometimes they experience some spiritual difficulty due to the gorgeous material facilities available to them. Such disturbances, however, cannot exist within the mind of a pure devotee of the Lord, as indicated in this verse by the word akuṇṭha-smṛti.

According to Śrīla Bhaktisiddhānta Sarasvatī Ṭhākura, we can understand from this verse that since none of the material facilities available in any of the universal planetary systems can distract a pure devotee of the Lord, such a devotee can never possibly fall or become inimical to the Lord's service.
bhagavata uru-vikramāńghri-śākhā-
nakha-maṇi-candrikayā nirasta-tāpe
hṛdi katham upasīdatāḿ punaḥ sa
prabhavati candra ivodite 'rka-tāpaḥ

SYNONYMS
bhagavataḥ — of the Supreme Personality of Godhead; uru-vikrama — which have performed great heroic deeds; ańghri — of the lotus feet; śākhā — of the toes; nakha — of the nails; maṇi — which are like jewels; candrikayā — by the moonshine; nirasta-tāpe — when the pain has been removed; hṛdi — in the hearts; katham — how indeed; upasīdatām — of those who are worshiping; punaḥ — again; saḥ — that pain; prabhavati — can have its effect; candre — when the moon; iva — just as; udite — risen; arka — of the sun; tāpaḥ — the burning heat.

TRANSLATION
How can the fire of material suffering continue to burn the hearts of those who worship the Supreme Lord? The Lord's lotus feet have performed innumerable heroic deeds, and the beautiful nails on His toes resemble valuable jewels. The effulgence emanating from those nails resembles cooling moonshine, for it instantly relieves the suffering within the heart of the pure devotee, just as the appearance of the moon's cooling light relieves the burning heat of the sun. (Srimad Bhagavatam).

PURPORT
When the moon rises, the expansion of its rays drives away the distress of the sun's fierce heat. Similarly, the cooling rays emanating from the lotus nails of the Personality of Godhead's lotus feet vanquish all distress for the Lord's pure devotee.

According to the Vaiṣṇava commentators it is to be understood from this verse that material lust, exemplified by uncontrolled sexual desire, is exactly like a blazing fire. The flames of this fire burn to ashes the peace and happiness of the conditioned soul, who perpetually wanders in 8,400,000 species of life, vainly struggling to extinguish this intolerable fire.

The pure devotees of the Lord place the Lord's cooling, jewellike lotus feet within their hearts, and thus all of the pain and suffering of material existence are extinguished.

The word uru-vikramāńghri indicates that the Lord's lotus feet are quite heroic. Śrī Kṛṣṇa is famous for His incarnation as Vāmana, the dwarf brāhmaṇa, who extended His beautiful toes up to the outer limits of the universe and perforated the universal shell, thus bringing the waters of the holy Ganges into the universe.

Similarly, when Kṛṣṇa was entering the city of Mathurā to challenge the demoniac King Kaḿsa and His entrance was impeded by a ferocious elephant named Kuvalayāpīḍa, Lord Kṛṣṇa kicked the elephant to death and peacefully entered the city gates.

SYNONYMS
samāśritāḥ — having taken shelter; ye — those who; pada — of the feet; pallava — like flower buds; plavam — which are a boat; mahat — of the total material creation, or of the great souls; padam — the shelter; puṇya — supremely pious; yaśaḥ — whose fame; mura-areḥ — of the enemy of the demon Mura; bhava— of the material existence; ambudhiḥ — the ocean; vatsa-padam — the hoof-print of a calf; param padam — the supreme abode, Vaikuṇṭha; padam padam — at every step; yat — where; vipadām — of material miseries; na — none; teṣām — for them.

TRANSLATION
For those who have accepted the boat of the lotus feet of the Lord, who is the shelter of the cosmic manifestation and is famous as Murāri, the enemy of the Mura demon, the ocean of the material world is like the water contained in a calf's hoof-print. Their goal is paraḿ padam, Vaikuṇṭha, the place where there are no material miseries, not the place where there is danger at every step. (Srimad Bhagavatam).