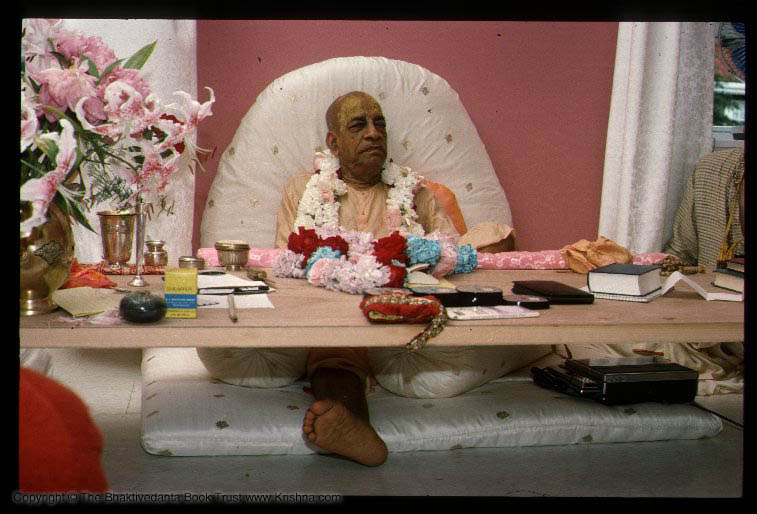 TRANSLATION
One who is not envious but is a kind friend to all living entities, who does not think himself a proprietor and is free from false ego, who is equal in both happiness and distress, who is tolerant, always satisfied, self-controlled, and engaged in devotional service with determination, his mind and intelligence fixed on Me — such a devotee of Mine is very dear to Me. (Bhagavad-Gita As It Is).

PURPORT
Coming again to the point of pure devotional service, the Lord is describing the transcendental qualifications of a pure devotee in these two verses. A pure devotee is never disturbed in any circumstances. Nor is he envious of anyone. Nor does a devotee become his enemy's enemy; he thinks, "This person is acting as my enemy due to my own past misdeeds. So it is better to suffer than to protest."

In the Śrīmad-Bhāgavatam (10.14.8) it is stated: tat te 'nukampāḿ susamīkṣamāṇo bhuñjāna evātma-kṛtaḿ vipākam. Whenever a devotee is in distress or has fallen into difficulty, he thinks that it is the Lord's mercy upon him. He thinks, "Thanks to my past misdeeds I should suffer far, far greater than I am suffering now. So it is by the mercy of the Supreme Lord that I am not getting all the punishment I am due. I am just getting a little, by the mercy of the Supreme Personality of Godhead." Therefore he is always calm, quiet and patient, despite many distressful conditions.

A devotee is also always kind to everyone, even to his enemy. Nirmama means that a devotee does not attach much importance to the pains and trouble pertaining to the body because he knows perfectly well that he is not the material body. He does not identify with the body; therefore he is freed from the conception of false ego and is equipoised in happiness and distress.

He is tolerant, and he is satisfied with whatever comes by the grace of the Supreme Lord. He does not endeavor much to achieve something with great difficulty; therefore he is always joyful. He is a completely perfect mystic because he is fixed in the instructions received from the spiritual master, and because his senses are controlled he is determined.

He is not swayed by false arguments, because no one can lead him from the fixed determination of devotional service. He is fully conscious that Kṛṣṇa is the eternal Lord, so no one can disturb him. All these qualifications enable him to fix his mind and intelligence entirely on the Supreme Lord.

TRANSLATION
He for whom no one is put into difficulty and who is not disturbed by anyone, who is equipoised in happiness and distress, fear and anxiety, is very dear to Me. (Bhagavad-Gita As It Is).

PURPORT
A few of a devotee's qualifications are further being described. No one is put into difficulty, anxiety, fearfulness or dissatisfaction by such a devotee. Since a devotee is kind to everyone, he does not act in such a way as to put others into anxiety. At the same time, if others try to put a devotee into anxiety, he is not disturbed. It is by the grace of the Lord that he is so practiced that he is not disturbed by any outward disturbance.

Actually because a devotee is always engrossed in Kṛṣṇa consciousness and engaged in devotional service, such material circumstances cannot move him. Generally a materialistic person becomes very happy when there is something for his sense gratification and his body, but when he sees that others have something for their sense gratification and he hasn't, he is sorry and envious. When he is expecting some retaliation from an enemy, he is in a state of fear, and when he cannot successfully execute something he becomes dejected. A devotee who is always transcendental to all these disturbances is very dear to Kṛṣṇa.