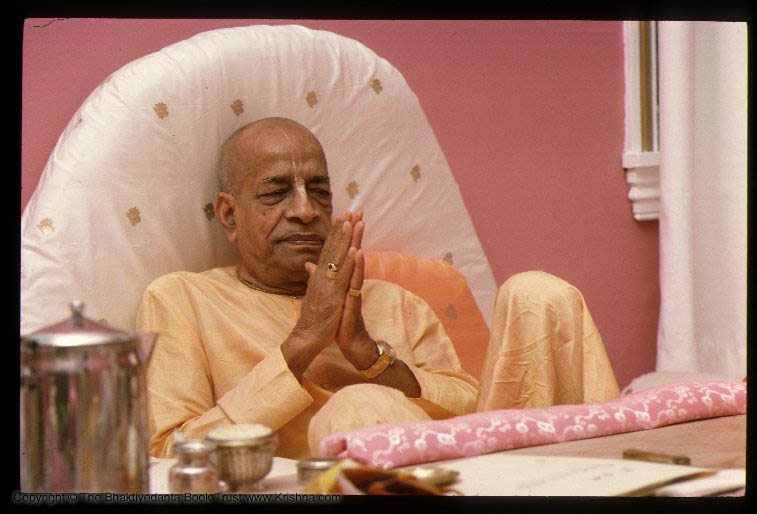 Bhagavad-gītā should be explained to persons who are ready to accept Kṛṣṇa as the Supreme Personality of Godhead. It is a subject matter for the devotees only and not for philosophical speculators. Anyone, however, who tries sincerely to present Bhagavad-gītā as it is will advance in devotional activities and reach the pure devotional state of life. As a result of such pure devotion, he is sure to go back home, back to Godhead.

Pure devotion is as much infectious, in a good sense, as infectious diseases. A pure devotee is cleared from all kinds of sins. The Personality of Godhead is the purest entity, and unless one is equally pure from the infection of material qualities, one cannot become a pure devotee of the Lord.

Those who are spontaneously devoted to the Lord and have no aims for material gain are called attracted devotees. They are spontaneously attracted to the service of the Lord, and they follow in the footsteps of self-realized souls. Their pure devotion (śuddha-bhakti), manifested from pure love of Godhead, surpasses the regulative principles of the authoritative scriptures. Sometimes loving ecstasy transcends regulative principles; such ecstasy, however, is completely on the spiritual platform and cannot be imitated. The regulative principles help ordinary devotees rise to the stage of perfect love of Godhead. Pure love for Kṛṣṇa is the perfection of pure devotion, and pure devotional service is identical with spontaneous devotional service.

A pure devotee is completely surrendered to the lotus feet of the Lord, and only by his love does he conquer Kṛṣṇa, who cannot be conquered by anyone. Kṛṣṇa always stands victorious over everything. No one can conquer Him. One can attain the stage of pure devotion simply by fully surrendering. This is next corroborated by Śrīmad-Bhāgavatam (10.14.3), wherein Lord Brahmā, defeated by the potency of Śrī Kṛṣṇa, fully surrendered unto the Lord.

Only by the grace of the divine personalities, the pure devotees of the Lord, can one achieve pure devotion, which is the highest perfection of human life. Only a pure devotee of the Lord can show one the right way of progressive life. Otherwise both the materialistic way of life, without any information of God or the demigods, and the life engaged in the worship of demigods, in pursuit of temporary material enjoyments, are different phases of phantasmagoria.

Unless one is a fully unalloyed devotee of the Lord, one should not try to describe the pastimes of Kṛṣṇa in poetry, for it will be only mundane. There are many descriptions of Kṛṣṇa's Bhagavad-gītā written by persons whose consciousness is mundane and who are not qualified by pure devotion. Although they attempted to write transcendental literature, they could not fully engage even a single devotee in Kṛṣṇa's service. Such literature is mundane, and therefore, as warned by Śrī Sanātana Gosvāmī, one should not touch it.

There is a common saying that one should first love the dog of the beloved before one shows any loving sentiments for the beloved. The stage of pure devotion is attained by sincerely serving a pure devotee of the Lord.

King Bharata—after whom India is called Bhārata-varṣa—was also a pure devotee, and at an early age he left his household life, his devoted beautiful wife, his son, friends and kingdom just as if they were stool. This is typical of a person who has developed bhāva in devotional service. Such a person thinks of himself as the most wretched, and his only satisfaction is in thinking that some day or other Kṛṣṇa will be kind enough to favor him by engaging him in devotional service. In the Padma Purāṇa another instance of pure devotion is found. There it is recorded that the king, although the most elevated of human beings, was begging from door to door and was even praying to the caṇḍālas, the lowest members of human society.
(Teachings of Lord Caitanya).

Persons infatuated by material consciousness are very intelligent in discovering things for material comforts, but they have no access to understanding the spirit soul and spiritual life. Therefore, if anyone wants to advance in spiritual life, he has to come back to the platform of purified desire, the purified desire for devotional service. As stated in the Nārada-pañcarātra, engagement in the service of the Lord when the senses are purified in Kṛṣṇa consciousness is called pure devotion.

Out of the five diversities in the Absolute Truth, the form of Lord Caitanya is that of the original Personality of Godhead, Kṛṣṇa. Lord Nityānanda is the manifestation of the first expansion of the Supreme Lord. Similarly, Advaita Prabhu is an incarnation of the Supreme Lord. These three—Caitanya, Nityānanda and Advaita—belong to the category of Viṣṇu-tattva, or the Supreme Absolute Truth. Śrīvāsa represents the pure devotee, and Gadādhara represents the internal energy of the Lord for the advancement of pure devotion. Therefore Gadādhara and Śrīvāsa, although included in Viṣṇu-tattva, are dependent, diverse energies of the Supreme Lord. In other words, they are not different from the energetic, but they are manifest diversely for the sake of relishing transcendental relationships.

By nature children are restless and playful, so in the kindergarten they are given toys and games to interest them in learning. Similarly, a neophyte is trained to perform activities in the mood of sacrifice, and he is encouraged to worship the Deities according to the scriptural injunctions. The expert Vaiṣṇava preceptor then gradually draws him toward the platform of pure devotion by narrating the spiritually potent topics of Kṛṣṇa consciousness and giving him the remnants of food offered to the Supreme Lord. These two aspects of devotional life act like medicine on the neophyte, who, like the rest of the world, is affected by the material disease.

There are five kinds of liberation, namely to become one with the Lord, to live with the Supreme Lord on the same planet, to have the same features as the Lord, to enjoy the same opulences as the Lord and to live as a companion of the Lord. A devotee, what to speak of rejecting material sense gratification, does not even want any of the five kinds of liberation. He is satisfied simply by discharging loving service to the Lord. That is the characteristic of pure devotion.

When a neophyte devotee deviates from the path of pure devotion and wants to simultaneously enjoy sense gratification and discharge devotional service, the all-merciful Lord very tactfully corrects the bewildered devotee by exhibiting before him the real nature of this material world.

Undeviating concentration on the Supreme Lord is the first sign of pure devotion. In other words, a pure devotee is one who wards off all desires and thoughts not related to unflinching devotional service to the Supreme Lord.

The devotee is always eager to see the Lord face to face, but if he is brokenhearted because he cannot see the Lord, even life after life, he will never command the Lord to appear. This is a sign of pure devotion.

The Supreme Personality of Godhead, Kṛṣṇa, is naturally very much affectionately inclined to His devotees. When He heard Śrutadeva's prayers of pure devotion, He was very much pleased and immediately caught his hands and addressed him thus: "My dear Śrutadeva, all these great sages, brāhmaṇas and saintly persons have been very kind to you by personally coming here to see you. You should consider this opportunity to be a great fortune for you."

A devotee is always sober. He is never disturbed by any conditions. Even if a devotee remains in gṛhastha life and does not renounce material possessions, he should still be understood to be praśānta, sober, because of his pure devotion to the Lord.

Tags: ‏, attained, be, can, devotion, how, is, it, pure, q
Email me when people reply –
Follow