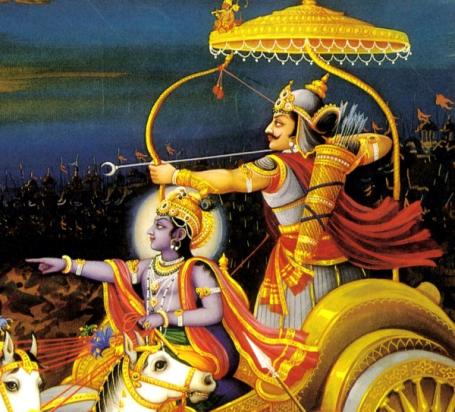 In the Bhagavad-Gita, Krsna discusses many different subjects. He starts with sankhya-yoga, the empirical knowledge that “I'm not this body”, the difference between spirit and matter. He also explains about Himself, God, and how we can get closer to Him while executing our prescribed duties. That's karma-yoga: mainly the third, fourth and fifth chapters. Karma-yoga means to remain in our material occupations and fulfill our duties, but to offer the fruits of our activities to Krsna. In one sense that's a preliminary process, but it is very important. It gives us a simple process from where to start.

For example, we have to eat. We hear that we should eat only prasadam, and strictly speaking, prasadam is when you cook for the deity, for the pleasure of the Lord, with elevated standards. At the same time, we can't eat only in the temple, we also need to eat at home. So, what should we do? If one still doesn’t have this mentality of cooking solely for the pleasure of the Lord, then he can cook what he wants to cook, following the proper standards, but before eating, offer to the Lord. In other words, even if one is not yet on a pure platform, at least he can offer the fruits to the Lord, following the guidance of superior authorities. That's one example of karma yoga: It may not be pure devotion yet, but it's a good start.

Karma-yoga is already done without expectation: one just offers the fruits to the Lord, without expecting any material recompense in return. In contrast with demigod worship, that is normally conducted as a kind of business, in karma-yoga we are already on the level of just wanting to please Krsna. That's why Srila Prabhupada doesn't make much distinction between karma-yoga and bhakti-yoga in his purports, translating both as "devotional service". In one sense there is no difference: they are just different steps in the same stairway.

But there is a subtle difference between karma-yoga and, in the strict sense, pure bhakti-yoga, pure devotional service. In karma-yoga we are still attached to engage in particular activities, so we keep executing our duties, but the fruits are dedicated to Krsna. Pure bhakti-yoga is a little bit different: we don't do what we want to do, we do what Krsna wants us to do. This demands a higher level of surrender: from the beginning to the end, it's for the satisfaction of the Lord, without any other consideration.

We can understand this from the example of Arjuna in the battle of Kurukshetra. If Arjuna would fight to get the kingdom, riches, and power, because he wanted to win the fight, and then, in the end, he would dedicate the fruits to Krsna, constructing temples, doing sacrifices, etc. that would be karma-yoga. But we see that right from the beginning Arjuna didn't want to fight: he would prefer to go to the forest or to live as a beggar. Yet, after hearing the Bhagavad-Gita, he fought with all his ability, not because he wanted, but because that was Krsna’s desire. Krsna told him: I want you to fight, not because you want to win the kingdom, but for Me, that's what is going to please Me.

That's the subtle difference between karma yoga and bhakti yoga. Bhakti-yoga is higher, but it's hard. We should be detached, but at the same time we also need maturity, because without maturity it becomes imitation: "I want to be a pure devotee, I want to be important, let me just abandon everything and surrender!". If someone tries to renounce with this mentality, out of frustration, or desire for fame and recognition, while still attached, he may do it for a few months, or maybe even for a year or two, but eventually he will just give up. This kind of imitation is not very valuable. In fact, that is precisely what Krsna tells Arjuna not to do.

Maturity means that we are doing something for the right reasons and, at the same time, we are sure about what we are doing. That's why Krsna says “mam ekam saranam vraja” (just surrender unto Me) in the end of Bhagavad-gita, not in the beginning. First, we need to understand the whole Bhagavad-gita and practice it, starting from "I'm not the body", then karma-yoga, then everything else, up to the point that we become detached and mature enough to be able to fully surrender to Krsna.

"Abandon all varieties of religion and just surrender unto Me. I shall deliver you from all sinful reactions. Do not fear." (Bg. 18.66)

For one who explains this supreme secret to the devotees, pure devotional service is guaranteed, and at the end he will come back to Me. There is no servant in this world more dear to Me than he, nor will there ever be one more dear. (Bg. 18.68-69)

That's the last instruction that Krsna gives in the Bhagavad-Gita. If you have someone very important to you, like your spiritual master, his last words are going to have special importance. Probably, you are going to align everything else that you received from him in the light of these last words. The last instruction that Srila Bhaktisiddhanta Sarasvati Thakura gave to Srila Prabhupada (in a letter, a few days before he passed away) was to preach in English, and we can see how deeply Srila Prabhupada took it. Sankaracarya was preaching impersonal philosophy, but his last words to his disciples were “bhaja govindam, bhaja govindam, bhaja govindam, mudha mate”: "You fools, you should worship Govinda!".

Similarly, these last words of Krsna in the Bhagavad-gita are even more confidential than sarva-dharman parityajya. Actually, they are a kind of purport. The Lord says: "Surrender unto Me", and one could ask: "What should be my occupation after I abandon my dharma and surrender to You?”. The Lord explains: "You should explain this supreme secret to others". And then He reassures: "By doing that, pure devotional service is guaranteed, and in the end you will come back to Me". As Srila Prabhupada explains in his purport to SB 8.7.44:

“The Lord says in Bhagavad-gita (18.68–69), ya idam paramam guhyam mad-bhaktesv abhidhasyati … na ca tasman manusyesu kascin me priya-krttamah: “One who preaches the message of Bhagavad-gita to My devotees is most dear to Me. No one can excel him in satisfying Me by worship.” There are different kinds of welfare activities in this material world, but the supreme welfare activity is the spreading of Krsna consciousness.”

Someone may argue: "But He says to explain it to devotees. Why we are going to distribute books outside?". In a sense, everybody is a devotee. Who is not a spirit soul? And where does the spirit soul come from? To whom is the spirit soul eternally connected? So, in the ultimate sense everybody is a devotee, everyone is connected to Krsna. That's the normal condition of the soul. The problem is that some of the souls have forgotten this, and thus they are accepting so many false designations, forms, desires and activities under the spell of illusion. That's the problem that we have to solve.

“Prahlada Maharaja ultimately instructed his class friends, the sons of the demons, to accept the process of devotional service by preaching the science of Krsna consciousness to everyone. Preaching is the best service to the Lord. The Lord will immediately be extremely satisfied with one who engages in this service of preaching Krsna consciousness. This is confirmed by the Lord Himself in Bhagavad-gita (18.69). Na ca tasman manusyesu kascin me priya-krttamah: “There is no servant in this world more dear to Me than he, nor will there ever be one more dear.” If one sincerely tries his best to spread Krsna consciousness by preaching the glories of the Lord and His supremacy, even if he is imperfectly educated, he becomes the dearmost servant of the Supreme Personality of Godhead. This is bhakti. As one performs this service for humanity, without discrimination between friends and enemies, the Lord becomes satisfied, and the mission of one’s life is fulfilled. Sri Caitanya Mahaprabhu therefore advised everyone to become a guru-devotee and preach Krsna consciousness (yare dekha, tare kaha ‘krsna’-upadesa). That is the easiest way to realize the Supreme Personality of Godhead. By such preaching, the preacher becomes satisfied, and those to whom he preaches are also satisfied. This is the process of bringing peace and tranquillity to the entire world.” (SB 7.6.24 purport)

To preach and distribute books is the ultimate instruction of the Bhagavad-Gita, it's no wonder that Srila Prabhupada stresses this point so much. As Krsna’s pure devotee, he is concerned about our ultimate welfare, he wants us to preach and become dear to Krsna, so we can join him in the spiritual world. Nowadays we may sometimes forget that Srila Prabhupada has organized the whole ISKCON society as a preaching machine that works with the sole goal of bringing souls back to Godhead, and that’s not just for the benefit of others, but for our own benefit.

HH Tamal Krsna Maharaja: "Previously, only a few fortunate persons who visited the temple had the opportunity to meet the devotees, but now, through sankirtana, tens of thousands of persons felt the soothing rain of Lord Caitanya's mercy. This was all due to the mercy of our spiritual master. By his strong desire and personal example he was inspiring us to assume the role of preachers. Though we might not ourselves feel compassion to relieve the suffering of the conditioned souls, Prabhupada did. It was only by his order that we were now empowered to go forth and offer Krsna's mercy to others. By encouraging us to deliver Krsna consciousness to the conditioned souls, Prabhupada was allowing us to share in the most confidential service of the Lord. We had no understanding of Krsna's desire, but by following Prabhupada's instructions we became the recipients of Lord Caitanya's blessings, and as a result, our hearts became softened, purified by the sankirtana-yajna." (Servant of the Servant, Ch. 2)

This is an excerpt of the book "Getting the Mercy", about book distribution. You can download the book or read more on:
https://www.gettingthemercy.com