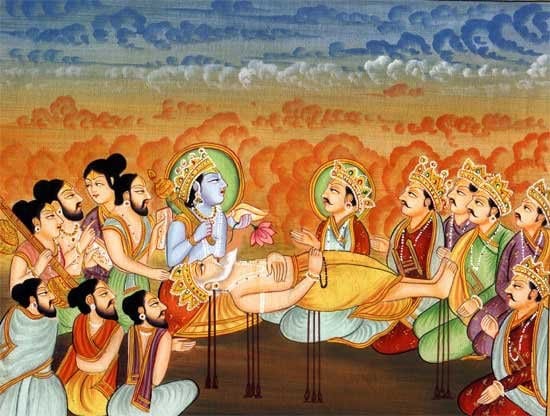 Bhisma-panchaka is five days dedicated to Bhismadev, The son of mother Ganga and his father King Shantanu-Bhismah santanavo birah. He is the Grandfather of Pandavas, descendant of Great king Bharata in Kuru dynasty .The period falls in the last 5 days of the month Kartik,the resounding 5 days of chaturmasya. It is said to commemorate the life of Grandfather Bhismadev, a key figure in the history of India, one who is known as a powerful warrior and commander-in-chief of the royal army who renounced his own claim to the throne of the world and instead remained celibate throughout his life as stated in Mahabharata and the Srimad-Bhagavatam.

After the chronological events that took place on the battlefield of Kurukshetra, being extremely pleased with  Bhismadev, Lord Krishna granted a special boon to those who worship Lord Hari and engage in devotional service during these five days. What is that special boon?

Lord Krishna agreed to bestow pure devotion to those who earnestly follow certain austerities these last five days of Kartik. As per Gaudiya vaishnava, Bhismadev is very well known as one of the twelve mahajanas—authorities—in the science of Krsna

consciousness. In his youth, he received the benediction that he would only die when he wishes it. He spent his final days giving spiritual and political instructions to King Yudhisthira while lying on a bed of arrows, having been wounded on the battlefield of Kurukshetra. After the Pandavas won the battle, Bhismadeva finally felt peaceful and wanted to leave his body looking into the lotus-like face of Lord Krishna in His transcendental feature as Partha-sarathi. This shows his unflinching faith and devotion to Lord Krsna, which we know is the highest perfection of life.

Seeing him [Bhisma] lying on the ground, like a demigod fallen from the sky, the Pandava King Yudhisthira, along with his younger brothers and Lord Krsna, bowed down before him. -SB 1.9.4 It is a joyous event since many devotees from various parts of the world come to Sri Mayapur Dham, India, situated very close to the holy bank of river Ganga. The atmosphere is filled with excitement in honoring such an auspicious, devotional vow.  Every year HH Jayapataka Swami Maharaj also joins us in Sri Dham Mayapur to give all of us His company. We have gathered an overwhelming response from many devotees participating from several countries and from many states of India..

Most importantly, HH Jayapataka Swami Maharaj always emphasises on following these 5 days in the shastric way as it is quoted by Srila Suta Goswami in the Padma Purana, Uttarakhanda, ‘This liberating fast is unknown even to the demigods.’

The Padma Purana says that this pleases Lord Keshava the worshipable Lord for the month of Kartik and he who follows, makes spiritual advancement by doing such vrata and is so powerful that one can even free oneself from one of the greatest sins. 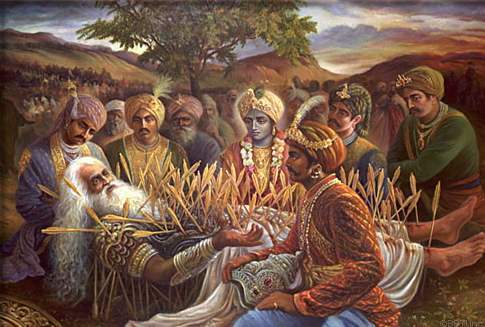 Highlights for these 5 days:

Ghee lamp Offering to Sri Radha Madhava and all the other deities.

There are 3 Levels of fasting.

In the Hari BhaktiVilasa it is suggested to observe fasting from certain foodstuffs on the Bhisma-panchaka vrata days for the pleasure of the Lord Keshava, according to one’s capacity and dedication.

Honoring five products of the cow known as pancha gavya on each of the five days.

Fifth day: All products of the cow mixed (Pancha-gavya)

If not then one can take fruits, nuts and roots, as said in level 2.

Nevertheless, fruits with lots of seeds are said to be avoided like guava, pomegranate, cucumber etc. Milk products and oils are also avoided. Only sea salt can be added to enhance the flavor. The above-mentioned foods can be taken raw, boiled or baked. It is recommended to complete the particular level once it has been started.

Ingredients for this level 3-Havishya as mentioned in Sri Hari-bhakti-vilasa (13.10-13). The following are ingredients that can be used in making Havishya, which is like a khichdi made with these items.

Sugarcane derivatives other than gur or molasses

The following ingredients which are normally a part of havishya need to be avoided if one is following Bhisma-panchaka-vrata.Dal,Oil,Jeera (cumin),   Radish,Tamarind, Beta sak, Turmeric

Special Offerings to the Lord during these days.

Following flowers to be offered to the Deities during the Bhishma Panchaka Vrata days as per Garuda Purana.

On the first day, one must offer Padma (lotus) flowers to the feet of the Lord.

On the second day, one must offer Bilva (wood-apple) leaves to the thigh of the Lord.

On the third day, one must offer gandha (fragrance/scents) to the navel of the Lord.

On the fourth day, one must offer Java flower (hibiscus) to the shoulders of the Lord.

On the fifth day, one must offer Malati flower to the head (siro-desa) of the Lordship.

In case there is an overlap of days then the flowers for both days can be offered on the same day.

In Sri Mayapur Dham, various facilities are provided by Temple management to make this vrata easy for devotees convenience. Gita kitchen takes up the responsibilities for providing vrata prasadam. Special offering of flowers and leaves to the Lord are provided in the Radha madhava puja offering counter.

While bathing in Ganges or any other holy river prayers are offered by reciting the following mantras:

The conclusion is, as Lord Brahma tells Narada in the Skanda Purana: ‘O son Narada, the month of Kartika is very dear to Lord Keshava. If anyone acts meritoriously this month just to please Lord Visnu, he receives unlimited results.’

Tags: bhisma panchaka, the passing away of bhismadeva, bhismadeva
E-mail me when people leave their comments –
Follow