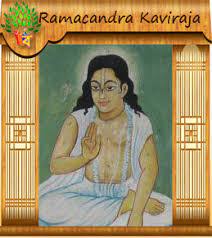 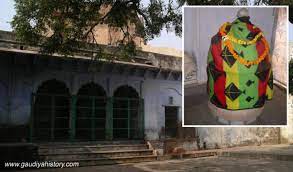 At first Sri Ciranjiva Sen lived in Kumara Nagara. After he married the daughter of the poet Sri Damodara Kavi, he moved to the village of Sri Khanda. Ciranjiva Sen was a Mahabhagavata, a topmost devotee of the Lord. The devotees of Sri Khanda, headed by Narahari Sarakara Thakura all had great affection and respect for Ciranjiva.

One day, Ramacandra Kaviraja was on the road to Yajigrama, on his way home from his wedding. At that time, Srinivasa acarya was passing on the road, accompanied by his followers.

Later, Shrinivasa Acharaya was in Yajigrama at his own house, where many devotees had gathered to hear him lecture on Shrimad-Bhagavatam. At that time, passing by the house of Shrinivasa Acharya was Ramachandra Kaviraja the son of Chiranjiva Sen (one of Mahaprabhu’s eternal associates).  He had just been married, and he and his new bride were on their way back from the wedding.

After seeing each other they were eager to meet one another.  Shrinivasa Acharya inquired about Ramachandra Kaviraja from the local people.  They told him that he was a great pandita named Ramacandra—a learned poet and expert doctor from a family of doctors and scholars. Hear all this, Srinivasa acarya smiled, for he was greatly pleased.

Ramachandra Kaviraja had heard about Shrinivasa Acharya and was eager to have his darsana.  In this way, he finally went to the house of  Srinivasa acarya along with his new bride and were introduced by some of the local people.  The day passed quickly in discussion of Hari-katha. They spent the night where they had been staying since coming to Yajigrama, at a brahmana’s house near the home of Shrinvasa Acharaya, and the following morning went to Shrinivasa Acharya and fell before his feet offering prostrated obeisances.

The Acharya bade Ramachandra Kaviraja to get up from the ground, and heartily embraced him saying, “Life after life you have been my friend.  Providence has brought us together again today by arranging our meeting.” Both of them felt great happiness as a result of their having met.

Seeing that Ramchandra had an acute and  deeply learned transcendental intelligence, Shrinivasa was very happy.  He began to make him hear the Goswami scriptures. Ramacandra’s pure behavior  which was always in accordance with the scriptures very much pleased Srinivasa acarya, and after a few days the Acharya initiated him in the divine Radha-Krishna mantra.

Sri Ramacandra Kaviraja delivered many sinners and nonbelievers to a life of auspiciousness as a result of his mercy. At the festival in Kheturi-grama, he was one of the leaders. On the order of Narottama dasa Thakura and Srinivasa acarya he went to Vrndavana.

After some days in Vrndavana, feeling the pain of separation in this way, while deeply meditating upon the lotus feet of Sri Radha and Govinda, he entered into their eternal Vrndavana pastimes.  His disappearance day is on the third day of the dark moon in the month of Pausa.