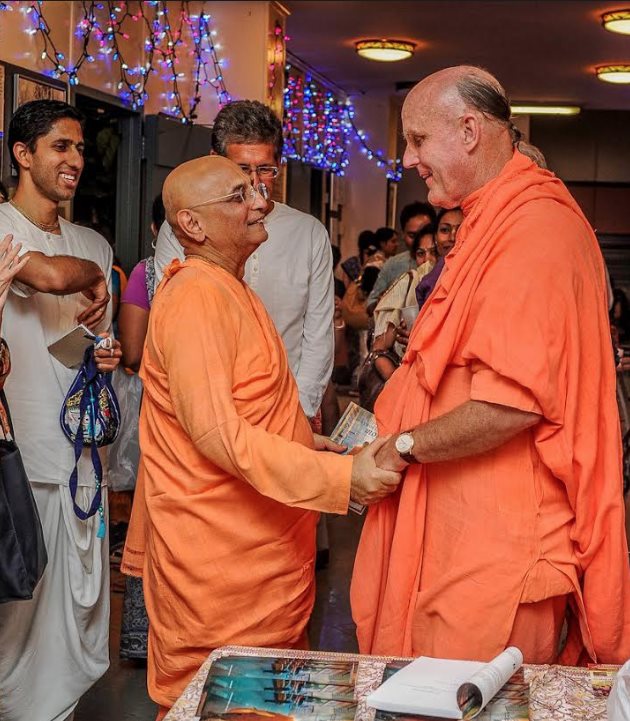 Please accept my most humble obeisances. All glories to Srila Prabhupada.

On this auspicious day of Guru Purnima I want to express my condolences to all of you on the departure of your beloved spiritual master, Bhakti Charu Maharaja. I had planned to write an offering to him today, but I feel a letter to console all of you in your grief would be of greater service to him.

My heart goes out to all of you wherever you are in the world. The outpouring of love and appreciation for your spiritual master currently flooding the worldwide ISKCON community shows the immensity of his influence and personality. He touched the hearts of countless devotees, even those he never met:

“The transcendental attractive qualities of an exalted devotee popularise his presence everywhere even though he may be hidden from public view, just as musk spreads its fragrance everywhere even when locked away in a tight container.”

As your Guru Maharaja was a close friend of mine for many years, I am crying alongside you. Although we know intellectually from our philosophy that the “soul is eternal and never dies”, we cannot deny the sadness we feel when a devotee departs. Srila Prabhupada refers to the devotees’ soft-heartedness in a purport in Bhagavad Gita:

“While observing the situation of his enemy, Arjuna stood up on the chariot, but he was so afflicted with lamentation that he sat down again, setting aside his bow and arrows. Such a kind and soft-hearted person, in the devotional service of the Lord, is fit to receive self-knowledge.”

These next few days and weeks will be a time of grieving for you. Please know that I and our entire movement grieve with you. It must be so.

In a Vyasa Puja offering he wrote in 1961 our beloved Srila Prabhupada personally expressed the same anguish we are all now feeling in reference to the departure of his spiritual master:

“On this day, O my master, I made a cry of grief; I was not able to tolerate the absence of my guru.”

“Only in the agony of parting do we look into the depths of love.”

The most important thing to remember is that there is never any question of separation from your spiritual master. Through the transcendental medium he will always be with you. This is confirmed in a 1929 edition of Srila Bhaktisiddhanta Saraswati’s Harmonist magazine where we find the famous stanza Srila Bhaktivinode Thakur wrote after visiting the samadhi of Srila Haridasa Thakura in Jagannatha Puri:

“He reasons ill who tells that Vaisnavas die

when thou art living still in sound.

The Vaisnavas die to live and living try

to spread a holy life around!”

Srila Prabhupada personally expressed the same sentiment in a letter he wrote to me in 1971:

“My dear Bhakta Brian, I can understand your feelings of separation from me after I left the Detroit temple. I am also feeling separation from my guru maharaja, although I feel he is always watching over and protecting me.”

You can also find solace in knowing that although Bhakti Charu Maharaja has left us, he is Srila Prabhupada’s eternal servant and is either on another preaching adventure with Srila Prabhupada or is, by his grace, engaged in eternal life in the transcendental realm. Srila Prabhupada himself confirms that, for the devotee, both living and dying are the same:

Prabhupada: We have no such difference, disappearance and appearance.

Giriraja: Except in your case. We don’t want disappearance.

Prabhupada: Jivo va maro va. Because we are going to accept eternity, so appearance and disappearance of this body is not a very important thing. Nitya-lila, eternal life – that is our Kṛṣṇa consciousness.

You can be very proud of your spiritual master! He spent a lifetime in service to Srila Prabhupada and Krsna; he captured their hearts and they have taken him from this world of birth and death to be with them.

“O best of My devotees, for so many lifetimes you have abandoned your wife and home to attain Me. For the sake of My service you endured untold miseries such as cold, wind, hunger, thirst, and pain. Maintaining your life by begging, you tolerated countless abuses and insults from others. Unable to repay you, I have become indebted to you. For you, lordship over the entire earth, sovereignty of the heavenly planets, the position of Lord Brahma and all the various mystic perfections, are completely unsuitable. How could I grant them to you? These things are grass and straw which animals find enjoyable, but they are not fit for humans. Though I’m unconquerable, today I’ve certainly been conquered by you. Now I’m taking shelter of the creeper of your excellent character and gentle conduct!”

Once again, my heart goes out to all of you. If I can be of any service to any one of you, please don’t hesitate to contact me.

Your servant in service to your spiritual master,