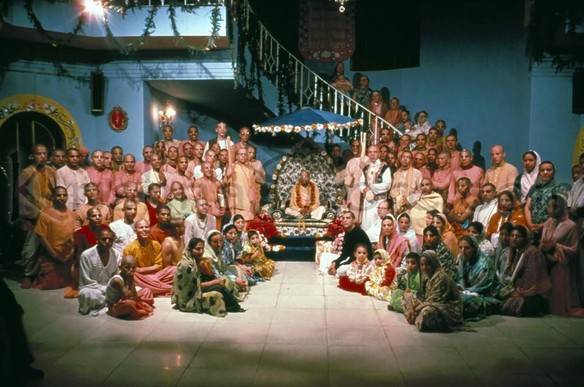 Lord Caitanya then inquired: What is the most profitable thing in the world, the essence of all auspicious events? Ramananda Raya replied that there is nothing as profitable as the association of pure devotees.” (Teachings of Lord Caitanya, Page 341)

When did I meet Srila Prabhupada? The year Srila Prabhupada arrived in Butler, Pa. (Sept. 1965). Is it possible I was visiting my Grandparents in Butler? Did I happen to catch a glimpse of Srila Prabhupada? Or the following summer, at the age of 13, did I happen to walk downtown Butler where His Divine Grace had previously walked? There is no question that Srila Prabhupada’s very presence, his kirtan and bhajan, his transcendental preaching, purified the material atmosphere of the Butler area like nothing ever before… at least in THIS age!

“Some say that the devotee should remain in holy places like Vrindavana or some holy town where the Lord lived, but a pure devotee can live anywhere and create the atmosphere of Vrindavana by his devotional service. It was Sri Advaita who told Lord Caitanya, “Wherever You are, O Lord – there is Vrindavana.” (Bhagavad-gita As It Is, 8.14, Purport)

In 1971 while spending a weekend with a few new friends, our host was often speaking informally on topics of the nature of the soul. I had never heard these topics spoken about in such a deep way! When the weekend was ending, I asked if there were any books containing his contributions to these discussions. He kindly handed me Easy Journeys to Other Planets. I do not recall a picture of Srila Prabhupada on that publication and of course did not connect “His Divine Grace A.C. Bhaktivedanta Swami Prabhupada” as author until some months later, but I did begin chanting “Hare Krsna Hare Krsna Krsna Krsna Hare Hare/ Hare Rama Hare Rama Rama Rama Hare Hare” as a result of hearing from His Divine Grace.

Some time later, once again visiting friends, someone arrived who had a box full of pictures he had taken of this man sitting on a special seat! These 8×10 photos in the box, all the same, showed a light-filled person, a smiling elderly man… and I wanted so badly to have one of those pictures, but could not bring myself to ask for one!

“Pure devotees are so absorbed in thought of Krsna that they have no other engagement; although they may seem to think or act otherwise, they are always thinking of Krsna. The smile of such a Krsna conscious person is so attractive that simply by smiling he wins so many admirers, disciples and followers.” (Srimad-Bhagavatam, 3.22.21, Purport)

“Pure devotees of the Lord are more powerful than the waters of the sacred river Ganges. One can derive spiritual benefit out of prolonged use of the Ganges waters. But one can be sanctified at once by the mercy of a pure devotee of the Lord.” (Srimad-Bhagavatam, 1.1.15, Purport)

In October of 1972 I moved into a temple 1000 miles away from my first encounter with His Divine Grace via his previous presence, his words, his books! December 1973 I received initiation from His Divine Grace. Yet I had only seen Srila Prabhupada’s picture and read his books! Finally after taking second initiation, Srila Prabhupada was going to arrive at the temple I was then residing in. Because it was a large community of disciples and so many had come from far and wide to have Srila Prabhupada’s mercy, I still had only caught a fleeting glimpse! Finally I was to actually be in the temple room for the morning lecture as arrangements were made to allow me on the men’s side. I will never forget Srila Prabhupada’s first words spoken that morning… before even formally beginning class… and not even recorded anywhere (I have searched and searched): “The problem with you young American boys and girls is you are not afraid enough of Maya!”

Even in my fallen condition, there is one thing I have full confidence in: His Divine Grace A.C. Bhaktivedanta Swami Prabhupada will continue to shower his causeless Vaishnava mercy on any soul anywhere who has the good fortune to read (or even touch!) Bhagavad-gita As It Is, Srimad-Bhagavatam, Sri Caitanya-caritamrta, any bona fide original publication containing the translations, purports, words given to all us conditioned souls for the next 10,000 years!!!

“We think that we have met Your Goodness by the will of providence, just so that we may accept you as the captain of the ship for those who desire to cross the difficult ocean of Kali, which deteriorates all the good qualities of a human being.” (Srimad-Bhagavatam, 1.1.22)

All glories to Srila Prabhupada, whose forgiveness and mercy I pray for.