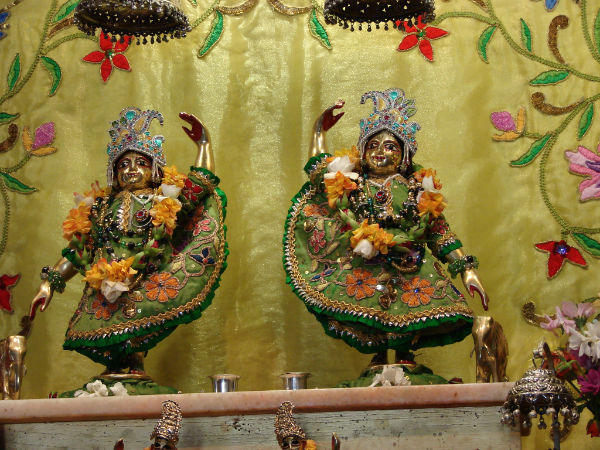 After many years of hard work and struggle, devotees in Buenos Aires, the capital city of Argentina, are seeing their efforts pay off as Krishna Consciousness reaches a mainstream audience.

Just one example of this is the December issue of the very popular New Age/religious magazine Uno Mismo. Featured on its cover, in saffron robes and bright Vaishnava tilak, is spiritual leader Gunagrahi Das Goswami, who came to assist ISKCON Argentina in 1996. Roughly translated from the Spanish, the tag line reads: “An interview with Gunagrahi Das Goswami – ‘True happiness is a spiritual state of being.’” Starting on page eight of the magazine is the five page interview, which was originally spoken when Gunagrahi appeared as a guest on the radio show Liliana en Del Plata, during the lead-up to Christmas 2011.

Deeply inspired by the interview, Maria Laura Ferro, the editor of Uno Mismo (which means “one self”), transcribed it in its entirety and published it in the Christmas 2012 issue of her magazine. In the interview, Gunagrahi Goswami explains how God is one and simply has different names in different languages. He says that Krishna devotees in Argentina also worship Jesus Christ as a great representative of God, and even have a special program at their temple honoring him during Christmas time. The temple courtyard of the 24,700 square foot ISKCON property in Buenos Aires “I talked about how Christmas nowadays doesn’t pay proper tribute to Jesus, but is instead just an excuse for more sense gratification, rather than more prayer,” Gunagrahi Goswami says. “I said that we were advocating that people try to remember a little bit about what Jesus stood for, and derive their satisfaction in a more spiritual way during Christmas.” The magazine flew off newsstands throughout Christmas time, and Gunagrahi Goswami was regularly recognized in public. Meanwhile devotees laminated the magazine’s cover and used it as a preaching tool during the Christmas book distribution marathon. People, hearing that Srila Prabhupada’s books contained the philosophy expressed by the famous spiritual leader on the cover of Uno Mismo, snapped up the books enthusiastically.

Gunagrahi Goswami expects the magazine interview to be a stepping stone for more publicity, including TV appearances, next time he visits Argentina. Of course, it’s just one sign of ISKCON’s newfound popularity in the country, after years of struggle. Guests enjoy a dinner at the Naturaleza Divina restaurant ISKCON began in Argentina in the 1970s, but had to go undergound due to the fascist government of the time. Although it began officially again with the introduction of democracy in 1983, things weren’t easy at first. When Gunagrahi Goswami arrived in the country in 1996, the devotees were renting a small, dilapidated facility, and ISKCON Argentina was in a precarious situation.

“Since Buenos Aires is the tenth largest city in the world, with about thirteen million people, I thought it would be a good service to Srila Prabhupada if we could raise funds for a temple to call our own,” he says. In 2001, as Argentina was under economic collapse and the US dollar was very strong, Gunagrahi Goswami sent devotees to North America to distribute books to the Latino population there. The swanky boutique next door to the restaurant sell devotional items, books and clothing Devotees sold more than three million books over several years, and in 2006, they purchased their own property, which opened as a temple on December 31st, 2008.

Set in Colegiales, a trendy area frequented by vegetarians, artists, yoga practioners and many members of the Argentine film industry, the temple is a corner property with excellent exposure. The 24,700 square foot property is in fact four connected buildings surrounding a large central courtyard, which creates a sense of serenity even in the middle of the city. It includes the temple building, a prasadam hall, men’s and women’s ashrams, and guest quarters. Temple devotees distribute books four or five times a week, and hold major harinamas (street chanting) every Friday evening. Meanwhile the Sunday Feast at the temple draws several hundred people every week, all indigenous as there is no Hindu population in Buenos Aires. Over 200 students have attended the ISKCON Buenos Aires cooking class since it began 1 year ago ISKCON’s Food For Life program is also a major outreach effort, distributing prasadam at college campuses including el Ciudad Universitaria (University of Arquitecture) and Universidad de Ciencias Economicas de Buenos Aires (University of Economics of Buenos Aires). The Buenos Aires temple compound also includes a separate commercial property called Naturaleza Divina Divine Nature that is the main gateway for the public and features a restaurant, boutique, and educational institute.

The gourmet, table-service restaurant, which celebrated its second anniversary recently, is extremely popular, with lines that regularly extend out the door. Its monthly reservation-only live bhajans and special dinners are always sold out. And it is mostly frequented by middle and upper class clientele, with a home delivery service that caters to the rich and famous. A devotee distributes prasadam and a book to a student at a local university “I feel safe here, like no one is following me and taking pictures,” commented one Buenos Aires actress who visits the restaurant. “I feel at home.” Another client remarked: “I feel such a deep relief when I walk in this place. It is not just a restaurant, it is an experience.” Restaurant clients also frequent the swanky boutique next door, which sells devotional items and philosophical books, body care products, clothing and gifts. Built from ninety per cent recycled materials and one hundred per cent devotee labor, it also serves as a reception for temple visitors and a registration area for those who want to sign up for educational courses. The courses at the educational institute above the restaurant include El Científico Espiritual (The Spiritual Scientist), based on ISKCON Pune’s Journey of Self Discovery course. Aimed at the general public and those new to Krishna consciousness, it has been a major success, drawing twenty to forty students for each class.

A devotee teaches the El Cientifico Espirituel class “El Cientifico Espiritual made me realize that daily life and religious life aren’t two separate things, but rather that everything is connected and has a spiritual purpose,” commented one student, Sandra, a lawyer. “It’s a life-changing experience for one who isn’t familiar with what it means to be a Vaishnava. In fact, all of us who did the workshop together have decided to follow the teachings of Prabhupada.” As well as these, there’s an Introduction to Bhakti Yoga for those who are becoming more committed to the path of Krishna consciousness, a Bhakti Sastri study course for devotees, and of course the cooking class. Run by Gandharvika Dasi, who is married to Buenos Aires temple president Maha Hari Das, the cooking class began one year ago. Since then, it has been attended by over 200 students, including grandmas, professionals, students, famous people, and government officials. Students attend four Level One Indian Cooking courses one a month before receiving a diploma and moving on to Level Two.

Children are kept busy with Krishna conscious activities at Sunday School “We do not preach heavy Krishna consciousness in the classes,” says Gandharvika. “It is very subtle. Our mission is to introduce people to a vegetarian diet while developing friendships. We mention drops of philosophy here and there, but very lightly. We have found that by this technique they become very curious. More than half of them want to learn how to offer food by the end of the course. Next door to the cooking school, we hold philosophy classes and many of our cooking students end up taking those too. Several of our students have become devotees or friends of devotees, chanting, doing service in the temple and even working in the restaurant.” As well as all the programs for adults, ISKCON Buenos Aires offers a Sunday School for children, which facilitates six to twelve kids every Sunday and thirty to fifty on festival days.

Children learn art, kirtan, yoga, cooking, and music, as well as simple academic exercises. They do short interactive studies of Vaishnava holidays, and write offerings for Srila Prabhupada on his Vyasa Puja. In writing projects designed to get them thinking about why they are devotees and what Krishna consciousness means to them, they answer simple questions such as “Why do you chant Hare Krishna?” or “Why do you come to the temple?” As this vibrant blend of projects continues on, ISKCON Buenos Aires is also looking to the future, with plans to install Radha Krishna Deities, and to continue improving temple and residential facilities. Devotees will also use their newfound recognition to gain a stronger presence in the media and to design programs that draw successful people, media personalities and celebrities. “We’re training the devotees in how to receive the public and how to deal with them in a very nice, first-class way,” says Gunagrahi Goswami. “And we’re working on establishing our temple as the main center for Krishna consciousness in this part of the world.”