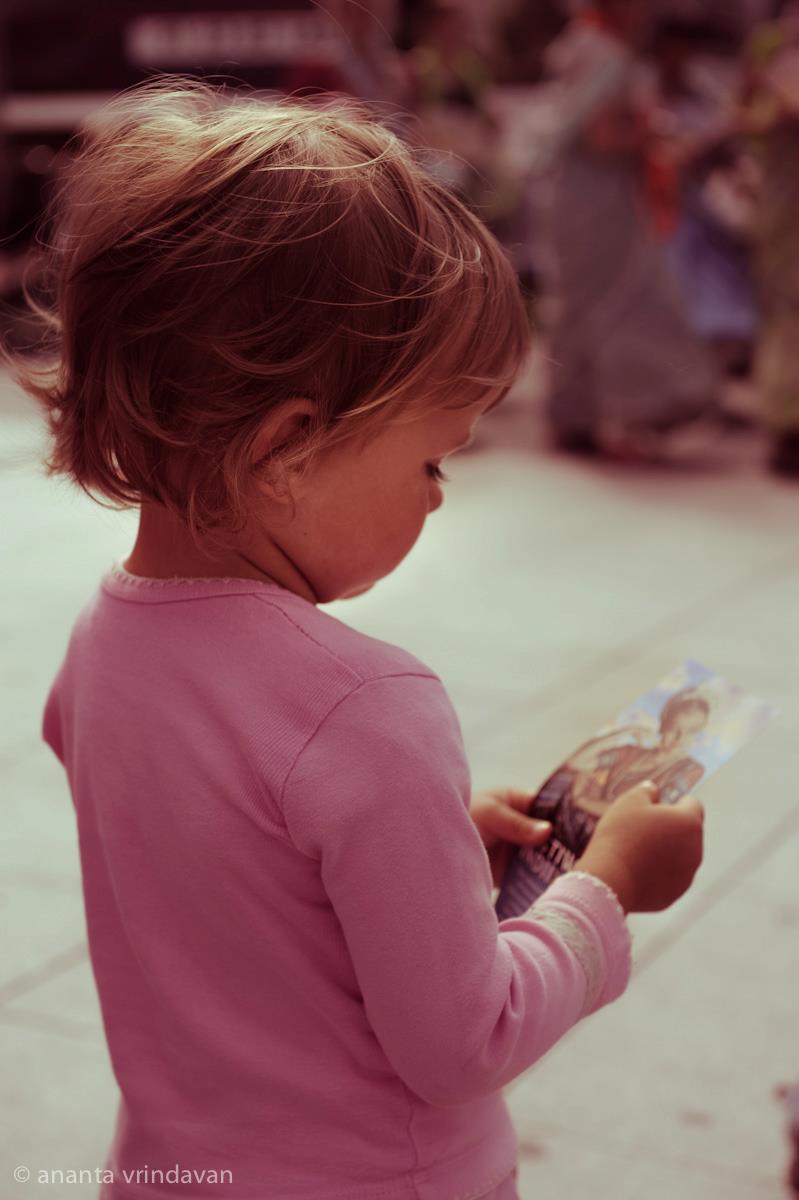 ...on females?
a survey on teenage females?
I walked closer to an A4 paper lying on the road side near to the bus stop and read the questions.
There were questions which I have never thought that such things really are in India - one of the holiest places of the world.
1. In which cloth you feel comfortable?
2. ...
3. Will you buy a condom in chemicals if no then why?
...
Little bit shocked I stepped aside from the paper and continued to wait for a bus.
I was leaving Temple which was close to the college, so was in saree, tilak...
Later my sight felt on one couple crossing the road. A boy who was eagerly embracing a girl and they were talking and going somewhere. Not so slim girl in jeans was around 15 or 20. Boy who was with her was around her age. Crossing very close to me girl told something in Hindi or Marathi when they crossed over I heard boy's saying to her "but the most beautiful girl is you are..." In this way they went away boy's hand embracing her waist.

If true, on iskcondesiretree.com forums and here on Facebook sometimes I get anonymous questions from young girls who lost their virginity and who were left by a guy who enjoyed them. How sad!
So it says girls and women should not be give freedom. Indeed it is for their well being.
Uncivilized men who cannot control their senses will say flowery words to you and take what they want from you. They make you believe that you are their life, soul, queen... with their words, some gifts if some of them are not greedy enough. They may be after you for quite few years even JUST to get what they want - satisfy their lust.

The most treasures thing and the thing which makes a girl beautiful, powerful is her PURITY - HER CHASTITY - HER VIRGINITY.

In Russian 'girl' is called as 'devushka'; it is closer to the Sanskrit word 'Devi'
Right from childhood girls are empowered by Demigods with all good qualities. Qualities like responsibility, cleanliness, service attitude, self sacrifice for the sake of others' happiness, caring, devotion, simplicity and many more.
Where as small boys are not so. Because of that in Vedic culture boys right from their early ages used to be sent to Gurukulas where they could live strict life under the guidance of a strict man - their Guru. Otherwise mother alone cannot bring up a real man. If boy gets trained by the mother till late ages then he will be a MOMMIES SON for whole life. Son who is not able to make decisions, fearful ... in short he will grew up with lesser manly qualities. So boys should be trained mostly by man in the family.
But girls are like brahmacharis right from their birth. They are obedient, hard working... So only thing parents should do is to help them remain as such. Always remind them about their good qualities; how they are beautiful; how they wash plates so nicely; how they cook so nicely; how they sing nicely...always remind of their good qualities. Other wise girls have one tendency to underestimate themselves. In bad association they may get hurt by others so they become pessimistic; they loose faith on themselves; of their abilities....

So coming back to purity. Girl will like a first man in her life so much that for whole life she may be chaste to that man only. But if she changes partners one after another influenced by many modern movies, by the influence of western culture then she won't be able to be chaste to her husband.
Union with a man means one is sharing her karma, her body and mind with that person. It means for whole life you will be connected with that person somehow or other.
So I hope this will inspire girls to keep their purity only for their husbands.
Indeed it says by the power of chastity man attains ultimate Truth and by the power of chastity girl will be rewarded with a perfect husband.
So chastity is a power.
Girls should think of that in little future they have to be a mothers of kids and caring wives.
So dear girls, You are almost the base of society!
It is says that behind every great man there is a great lady. Women may do simple things like cooking, cleaning, washing and remaining in the background but what man will come to a job hungry?
What child will study well not eating tasty foods? What man will work so hard if there is no care taking wife at home who makes home ready for his rest? Who trusts him; who inspires him?...
What child will grow up healthy if there is no mother who kicks away diseases just by her loving kisses???
...
So tighten Your belts and remain as You are - pure and do not run after western bad proposals of life!
Hare Krishna!