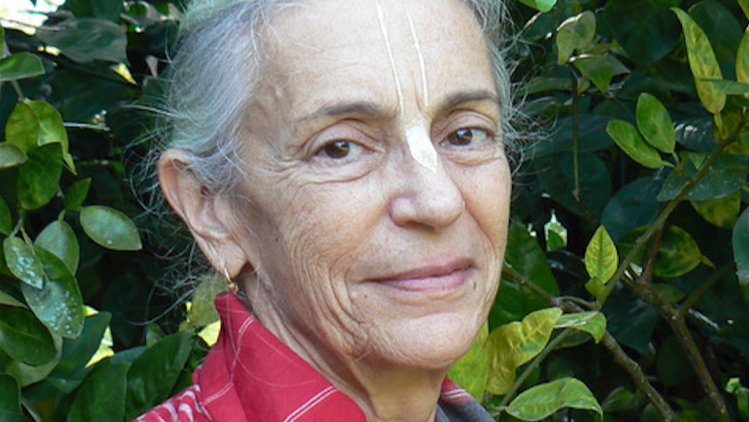 Bhaktivedanta Manor is pleased to announce the appointment of Visakha Dasi as Temple President. In August, Visakha Dasi spent time at the Manor and met with various official bodies that represent the community, managers, and trustees. The outcome was a unanimous decision that she was most suitable to lead and inspire the temple community. Former president Sruti Dharma Das welcomed the news: “It is an honour to have such a senior Vaisnavi and disciple of Srila Prabhupada now at the helm.”

During the interview process, leaders were asked to express what it is that they look for in a temple president. Consistently, their responses were, ‘Someone to care personally for the devotees ... a spiritual presence ... a person who keeps us aligned to His Divine Grace Srila Prabhupada’.

Visakha Dasi is well known in the international devotee community for the time she spent as Srila Prabhupada’s photographer and as an avid writer for Back to Godhead magazine. In more recent years she assisted her husband, Yadubara Das, in producing the award-winning film, Hare Krishna! The Mantra, the Movement and the Swami Who Started It All. Her book Five Years, Eleven Months and a Lifetime of Unexpected Love: A Memoir, which depicts her time spent with Srila Prabhupada, has also won awards and received great reviews.

Gauri Das, managing director at the Manor, said, “The Manor is one of ISKCON’s largest and most important temples. Gifted by George Harrison and founded by Srila Prabhupada, in spiritual heritage and influence Bhaktivedanta Manor plays a significant role. Visakha Dasi will contribute substantially to this ongoing legacy.”

The appointment will begin in January 2020, which is a great conclusion to the 50th anniversary of the incorporation of ISKCON UK celebrations. Chairman of the temple trustees, Navina Krishna Das, said, “The initial proposal of Visakha Dasi actually came as a result of her engagement with the youth. They had found her both inspiring and deeply grounded in the teachings of Krishna consciousness. Even though she was invited to apply for the temple president position, her interview process was rigorous. On each level we found what we were looking for: a depth of spiritual understanding and a sobering maturity in Krishna consciousness. We look forward to working with Visakha Dasi.”

Visakha Dasi says, “As the temple president of Bhaktivedanta Manor for many years, Sruti Dharma Prabhu has been exemplary in his service and dedication to Srila Prabhupada’s mission. My hope and prayer is that by Srila Prabhupada’s mercy I can follow in his footsteps.”