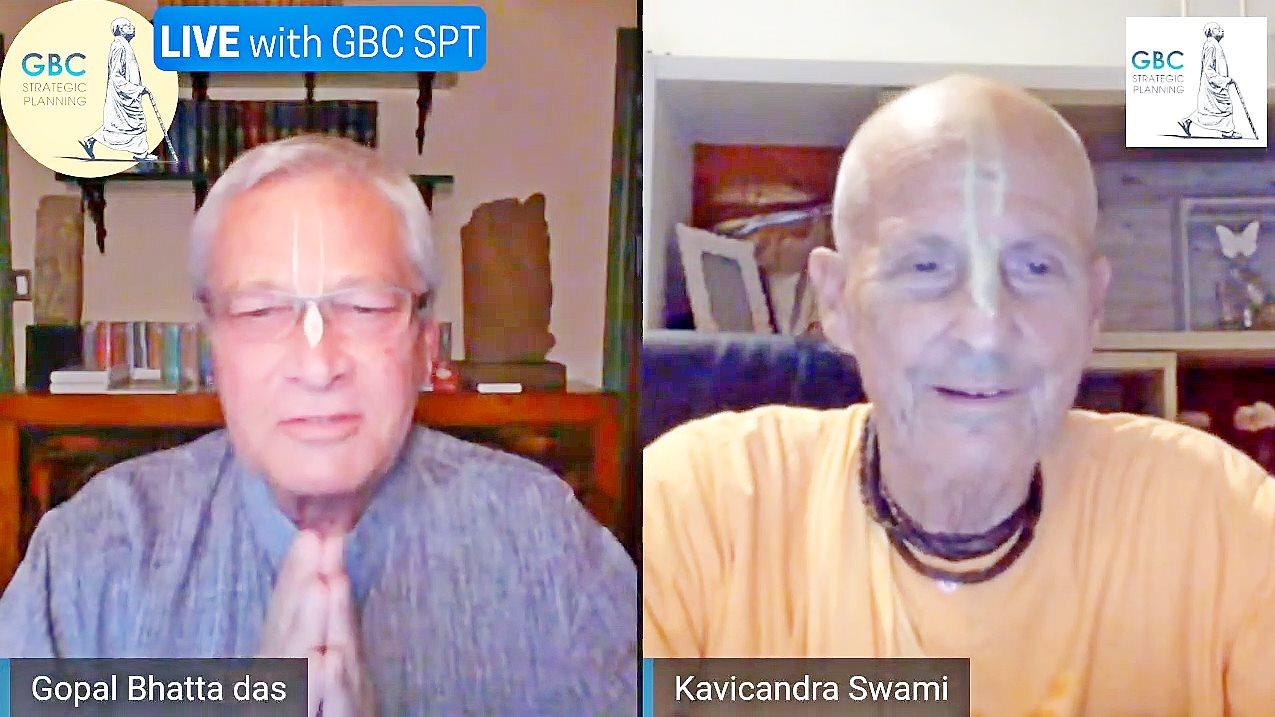 We are pleased to have HH Kavichandra Swami for our upcoming “Ask a GBC” series. It is an amazing opportunity to meet and hear from the people who are behind the policies in ISKCON and ask questions as he will be interviewed by Gopal Bhatta Das.

About Kavichandra Swami
Kavichandra Swami met the Hare Krishna devotees in 1967 and was initiated by Srila Prabhupada in 1971. He joined the temple in Tucson, Arizona, and since that time he has served in various capacities in the United States and around the world. Some of these services include, from 1973 until 1977, itinerant selling of Srila Prabhupada’s books to libraries, universities, and individuals (including leading a book distribution team called the Radha-Damodara-Sankirtan Party), preaching Krishna consciousness in Fiji, filling in as the general manager for the Radha-Rasabihari temple in Juhu, India, and as temple president in Tokyo, Japan. In Japan in 1982, Kavichandra Swami took his sannaysa vows (lifelong celibacy and a vow to fully serve his spiritual teacher with mind, body, and words). Five years later, in 1987, Maharaja started to serve as a GBC member for Japan. Gradually, his GBC responsibilities expanded from Japan to culturally diverse places such as Thailand, Indochina, Indonesia, Greece, and West Africa. Kavichandra Swami is also a committee member of the GBC Executive Committee, ISKCON Law Committee, and Revision Committee.
Kavichandra Swami has a special interest in book distribution, and Harinama sankirtan, and he writes of his faith in Srila Prabhupada on the topic of Harinama:
“1965 was an auspicious year for the earth, since that is the year that His Divine Grace A. C. Bhaktivedanta Swami, Srila Prabhupada, arrived in the United Sates of America. The U.S.A. was called, ‘the land of the free and home of the brave,’ but at that time many felt trapped and fearful.”
“Srila Prabhupada was fearless. He came to establish a worldwide sankirtan movement, which would spiritualize and liberate all who contacted it. No one would have suspected that within a few years the name of KRISHNA would become household words, and that devotees would be dancing and chanting on all the main streetsof the world.”
Kavichandra Swami invests time in devotee care by writing articles, participating in conferences and vigorously encouraging others to put effort into making it a priority.
As a traveling preacher and the initiating spiritual master of many disciples in his GBC regions and beyond, he naturally sees the whole world as his family. He does have biological family members as well: a daughter, Mona Aim, and her two daughters, Grace and Faith, who regularly attend temple functions in Los Angeles.

Tags: gbc, people behind the policies, kavichandra swami
E-mail me when people leave their comments –
Follow