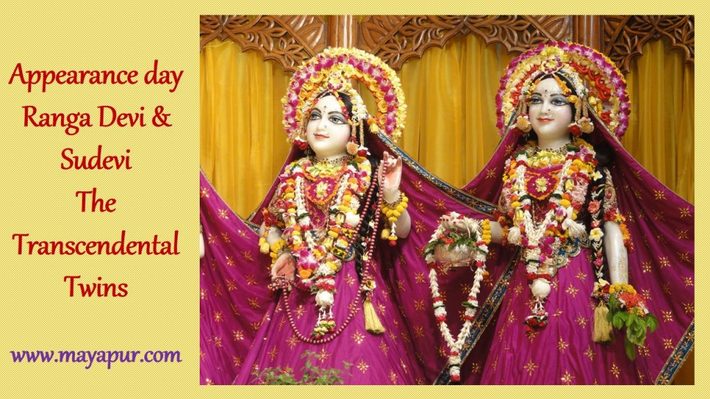 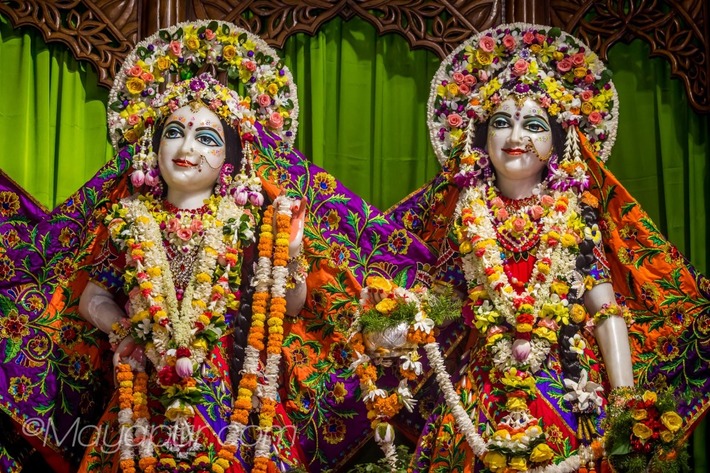 Today is the divine appearance day of the transcendental twins: Rangadevi and Sudevi Sakhi. In the year 1992, the last of the four Asta-sakhis, or principle associates of Srimati Radharani, appeared in Mayapur and took their places on the altar. Rangadevi and Sudevi, were two of these four and they stand third and fourth on Srimati Radharani‘s left.

Rangadevi and Sudevi are identical twins. Their father is Rangasara and their mother is Karuna. Rangadevi is married to Vakreksana, and Sudevi is married to Bhairava. They both have the complexion of padma-kinjalka, the yellowish-red colour of a lotus filament, and wear cloth the colour of java-kusuma, or the bright red hibiscus flower. Rangadevi’s kunja, or grove, is situated on the Southwest of Radha Kunda. It is syama, or blackish in colour, and is named Ranga-devi-sukhanda. Sudevi’s kunja is on the Northwest side of Radha Kunda, and is harita, or greenish in colour. It is named Vasanta-sukhada, which means Giver of Joy to the Spring.The twins are seven days younger than Srimati Radharani, their eternal age being fourteen years, two months and four days. Rangadevi, however, is half a day older than Sudevi, thus she is fourteen years, two months and four and a half days old. Rangadevi and Sudevi are very similar and are often mistaken for each other.

Rangadevi stands third to Srimati Radhika’s left, and her service to the Divine Couple is supplying chandana, or sandalwood paste. On the altar in Mayapur, she can be seen offering beautiful garlands or necklaces to Sri Sri Radha Madhava.  Her maidservant is Kasturi-manjari. Like her father, Rangadevi is always very fixed in performing her religious duties and observing various rituals. She is the leader of the maidservants who prepare and offer incense, perfume and cosmetics to Their Lordships. During the winter months, she keeps Radha Madhava warm by starting fires, and keeps Them cool in the summer by administering cooling chandana to Their bodies and fanning Them. She is also fond of joking with Srimati Radhika in front of Madhava.

Rangadevi is an ocean of feminine gestures, poses and glances. Her mood is utkanthita, which is described as a heroine who repeatedly glances down the path in anticipation, while anxiously awaiting the arrival of her beloved.

Her temperament is vama-madhya, or moderately contrary. She is very cultured, and many of her qualities are similar to those of Campakalata Devi – *prayena campaka-latadhi-gunam su-silam.* By her previous austerities, Rangadevi attained a special mantra which can attract Sri Madhava. In Gaura lila, some say she appears as Govindananda Ghosa, while others say Gadadhara Bhatta. 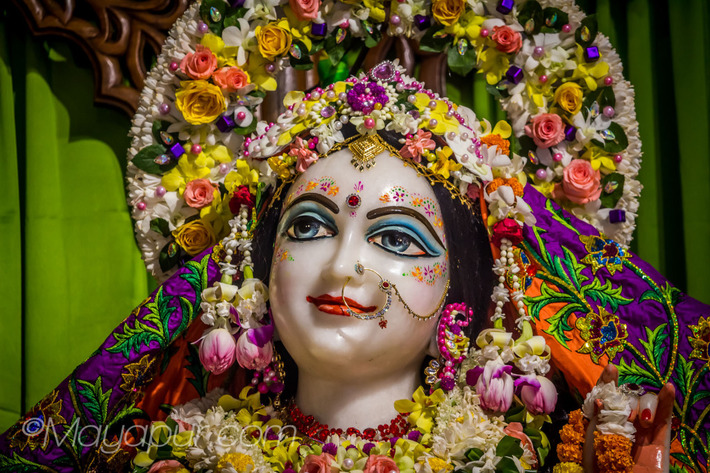 Sudevi is half a day younger than Rangadevi. Her service to the Divine couple is jala-seva, or offering water to the Divine Couple. Her service, as seen on the altar in Mayapur, is offering a beautiful basket of flowers to Sri Sri Radha Madhava. She is the fourth gopi on the left side of Srimati Radhika, and her maidservant is Manjulali-manjari.

Her mood is kalahantarita, or like a heroine who suffers after sending away her beloved during a quarrel, and she is very sweet and gentle by nature.

She typically stays by Srimati Radhika’s side, and is expert in performing splendorous devotional service with all her life and soul –sarvanu-jivana-gunojjvala-bhakti-daksam.

Sudevi is the swiftest runner, and coordinates entire networks of witty spies, who disguise themselves and move among the rival gopis and learn their secrets. She is skilled in training birds to talk and do tricks. She has a vast knowledge of birdcalls, and is in charge of the vana-devis, or the forest goddesses, who are in charge of various birds. She is learned in the scriptures of foretelling omens, and knows which lotuses bloom in the moonlight. She is the leader of the maidservants who fashions spittoons, bells, couches and sitting places. She is also very skilled in handling boats. Sudevi braids Srimati Radhika’s hair, decorates Her lotus eyes, and dexterously massages Her effulgent form using precious oils.

She is said to appear in Gaura lila as either Anantacharya Goswami or Vasudeva Ghosa. 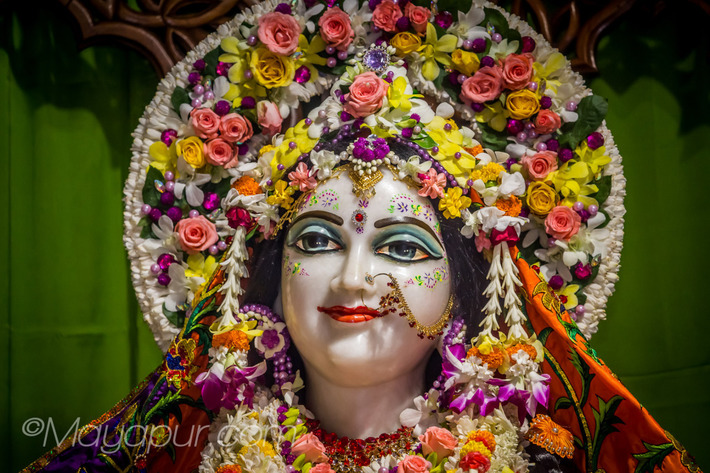