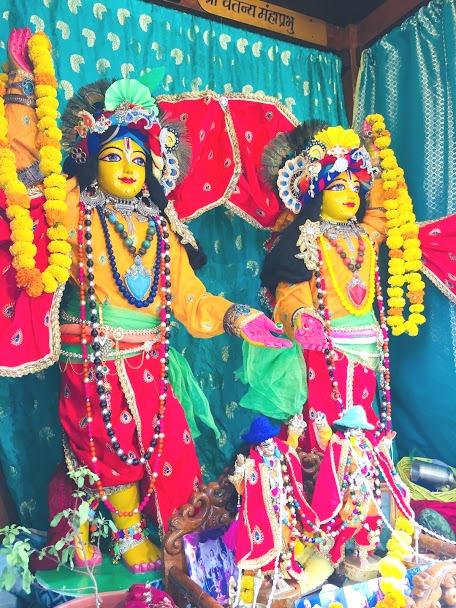 Srila Prabhupada once declared that he would personally travel by car taking dozens of men to preach in the villages of Gujarat.

“In the afternoon Kartikeya drove us five miles to a local village for a programme. In the car Prabhupada talked enthusiastically about village-to-village preaching. He is eager to see this programme established and said that mass propaganda of sankirtan and prasadam distribution will save India. He said that if programmes are arranged, he will travel in his new car (when it comes), taking a dozen men all around Gujarat to every village.” – A Transcendental Diary, Volume 1, December 27, 1975; Sanand, Gujarat. To fulfil that desire of Srila Prabhupada, and also of Bhakti Vikas Swami Maharaja, the Bharuch, Gujarat, devotees inaugurated a padayatra programme on December 15, 2019, in the presence of Rupa Raghunath Maharaja and about 1500 congregation devotees. Sometime before the inauguration the Bharuch devotees had phoned me and I told them the AIP had recently moved into Gujarat, which they were happy to hear and said that the inauguration would be arranged to take place when the padayatris were in Bharuch. Rupa Raghunath Maharaja attended the event, inspiring all of us, and Lokanath Maharaja was overjoyed to hear that Gujarat now had its own padayatra. Later both padayatra carts went through the city, thus announcing the beginning of the Gujarat Padayatra. 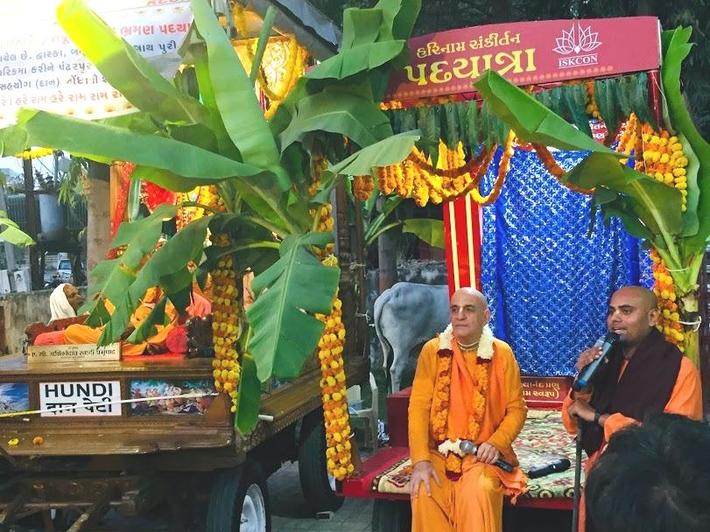 The padayatra, to be known as the Harinama Sankirtan Padayatra, will initially cover more than 1500 villages of the Bharuch and Narmada districts. The oxen Ramai and Nandai, named after assistants of Caitanya Mahaprabhu’s personal servant, Govinda, will carry Their Lordships Sri Sri Gaura-Nitai. Because the oxen were not trained, they spent ten days with the AIP learning to walk independently. The new padayatris also got trained for book distribution, advance party duties and announcements. The Gujarat padayatris walked with us until December 26 then continued walking in the district villages. It was wonderful to see the two padayatras together with two sets of deities, two carts and two teams of oxen.

The day after the inauguration we celebrated the disappearance day of Srila Bhakti Siddhanta Saraswati Thakur with the Bharuch devotees. They had cooked fifty-six bhoga preparations and we all had a grand sankirtan, thus ending two days featuring two celebrations. 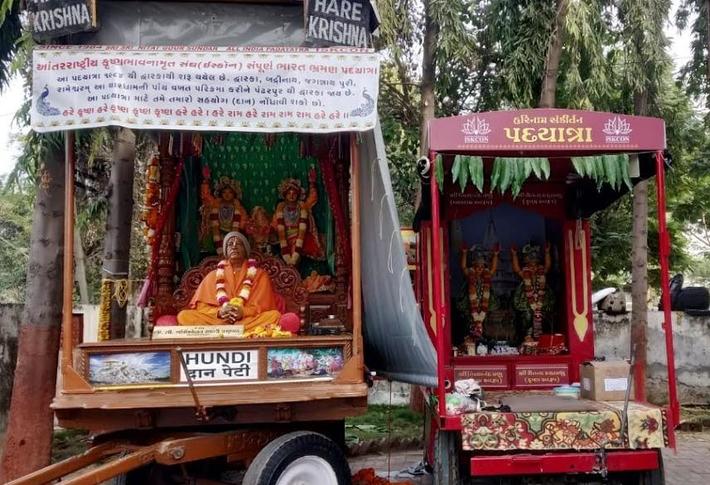