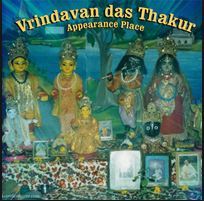 The mother of Srila Vrindavana dasa Thakura's was Sri Narayani devi, the niece of Srivasa pandita. In his Sri Caitanya Bhagavata, Vrndavana dasa has described how his mother attained the affectionate fervour of Sri Gaurasundara.

"Narayani devi received the entire remnants of Mahaprabhu's meal. Though she was only an insensible child he bestowed His mercy on her in this way."

Also as a result of this mercy, Srila Vrindavana dasa Thakura, whose life and soul was Sri Gaura-Nityananda, took his birth from her womb.

He hasn't mentioned the name of his father. It is believed that Narayani devi was married to someone at Kumarhatta. However, while she was still carrying the child in her womb, she was widowed. Being reduced to a condition of poverty by the loss of her husband, she finally accepted shelter in the house of Sri Vasudeva Datta Thakura, at Mamgachi, where she helped with the housework. Here Vrindavana dasa began his studies.

In the preface to Sri Caitanya Bhagavata, Sri Bhaktisiddhanta Sarasvati has written, "Narayani devi raised her child in the home of the father of Sri Malini devi where she had accepted shelter."

Vrindavana dasa was born four years after Mahaprabhu took sannyasa. When Mahaprabhu disappeared he couldn't have been more than twenty years old. He was initiated by Sri Nityananda Prabhu and was apparently the last disciple whom Sri Nityananda accepted. He accompanied Sri Jahnava Mata to the Kheturi maha-mahotsava. Sri Krsna dasa Kaviraja Gosvami has glorified Vrindavana dasa Thakura as the Veda Vyasa of the pastimes of Sri Caitanya Mahaprabhu.

"The pastimes of Krsna have been described in the Srimad Bhagavatam by Veda Vyasa. Vrindavana dasa is the Veda Vyasa of the pastimes of Sri Caitanya. He has composed Caitanya Mangala which destroys any inauspiciousness for those who hear it. So that we can understand the glories of Caitanya-Nitai, the essence of the conclusions regarding devotional service as expanded in Srimad Bhagavatam and the limits of the conclusions regarding Krsna bhakti, he has composed this great literature to uplift mankind. To compose such a work is not conceivable for a human being therefore we can understand that Sri Caitanya Himself is speaking through him. I offer my obeisances tens of millions of times at the lotus feet of that person who has given us such a scripture which can deliver the whole world." (C.C. where and give SP's translation)

Vrindavana dasa Thakura's Sripat, where his worshippable Deities of Sri Sri Gaura-Nitai are still residing, is at Denur. Denur can be reached by bus from Navadvipa.