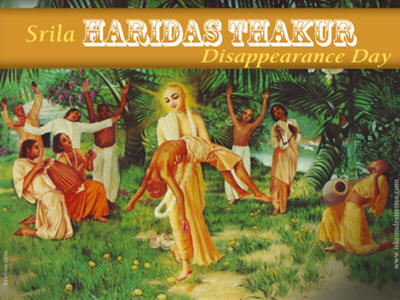 Sri Haridas Thakur is an eternally liberated associate of the Lord. The associates of the Lord are worshipable wherever they make their appearance. Just as Garuda appeared as a bird, and Hanuman as a monkey, Haridas Thakur appeared in a family of Yavanas (Mohammedans). From his very birth he was very deeply devoted to the Holy Names of Sri Krsna.

When he came to live by the banks of the Ganges, Advaita Acarya was very happy to get his association. The brahmana residents of Fulia were very pleased to see how he worshipped the Holy Name, and they used to come everyday to have his darshan. Gradually word began to spread of his glories. When the Mohammedan administrator came to know of all this he began to burn with malice and went to the local Mohammedan king to inform him, "Though he is Mohammedan, he behaves as a Hindu, are therefore he should be brought here for trial." Hearing the words of that sinful man, the local king who was also very sinful, had Hari das Thakur brought there immediately. [C. B. Adi 16.37].

The Mohammedan King told Haridas, "Just give up this chanting and say the Kalma (prayer of the Mohammedans)."

Haridasa Thakura replied, "The Supreme Lord is one, though His names might be different. The Hindu shastras are the Puranas and the Muslim sastra is the Koran. Everyone acts as he is inspired by the Lord, as also do I. Some yavanas become Hindus and some Hindus become yavanas, to worship the Lord. O Maharaja, you can now judge me."

Hearing these words the Kazi replied that it would be necessary to punish him. Hearing the decree of the Kazi, the Muluk pati addressed Haridasa, "My brother, just follow your own religion. Then you will have nothing to worry about. Otherwise you will have to be punished."

In reply to this Haridasa Thakura exclaimed, "Even if you cut my body into pieces, I will never give up the chanting of Hari nama." [C. B. Adi 6.94]

After hearing these words of Haridasa spoken with great determination, the Kazi declared, "He should be beaten in twenty two market places. If he doesn't die after this, then I will know that the learned gentleman speaks the truth."

Thus having heard the words of the Kazi, the sinful Muluk pati then ordered that Haridasa Thakura be beaten in twenty two market places. Haridasa remembered the Lord by chanting "Krsna Krsna", and in the happiness of that remembrance, he didn't feel any bodily inconvenience. [C. B. Adi 16.102].

As the demoniac associates of Hiranyakasipu tried in so many ways to kill Sri Prahlada Maharaja, but were unsuccessful, similarly the demoniac Mohammedans, though they tried to harm Haridasa Thakura, were unable to do so. Haridasa Thakur was immersed in the nectar of the Name and thus gradually the Mohammedans could understand that he wasn't an ordinary person.

Thus they humbly submitted to the Thakura, "Haridasa! We can understand that you are a genuine saintly person. No one can do anything to you. But the Mulukpati won't understand any of this. Rather he will have our heads." Hearing their frightened please Haridasa's external consciousness ceased and he entered into deep meditation on the Lord's Holy Name.

Then the Mohammedans carried his body on their shoulders to the Mulukpati, who surmised that he was dead. Thinking as such he ordered that his body be thrown in the Ganga. Haridasa's body floated down the Ganga until he reached Fulia ghat, where he got out of the water and began to loudly chant Hari Nama. Seeing the greatness of Haridasa Thakura, the Mulukpati became fearful. Along with the other Mohammedans he came there and begged Haridas Thakur to forgive him for his offence.

Considering him to be a holy man, they all offered their salutations and thus were delivered from their offences. Having witnessed the pastimes of the Thakura the devotees were in ecstasy.

Haridasa Thakur used to chant Hari Nama in a hollowed out cave like hole at the base of a tree. This "cave" still exists near Fulia, on the banks of the Ganga. One can get there by train from Santipura. Within the roots of this tree also lived a poisonous snake. Being fearful of this snake the devotees couldn't remain there for very long and one day they mentioned to the Thakura about this snake which was worrying them. Seeing the distress of the devotees Haridasa Thakur called to that snake and spoke to him, "My dear sir, if in fact you are residing here, then I am requesting that you please leave by tomorrow, otherwise I myself will definitely leave here."

Hearing these words of the Thakura, that snake immediately came out of its hole and after offering namaskar to the Thakura, it went elsewhere. Seeing this pastime, the devotees were struck with wonder and they developed profound and deep devotion for Haridasa Thakura.

One time Haridasa Thakura came to a village within Jessore district named Harinodegram, which was predominantly inhabited by brahmanas. One day during a religious discussion one puffed brahmana approached Haridasa Thakura and remarked, "O Haridasa! Why do you chant the holy name loudly? In the scriptures it is recommended to chant within the mind." In reply Haridasa Thakura told him, "The birds, beasts and insects cannot chant themselves, but if they get to hear Hari Nama then they also become delivered. If one chants only to himself then he delivers only himself, but if one chants loudly, the benefit is a hundred times greater. This is the conclusion of the scriptures." [C. B. Adi 16.180]

Hearing this objective statement of Haridasa Thakura that sinful brahmana couldn't tolerate it and exclaimed, "In Kali yuga sudras will recite the shastras, now I am seeing this with my own eyes." In answer to this personal insult delivered by that miscreant brahmana, Haridasa Thakura simply silently walked out of that assembly. Within a few days that brahmana contracted ulcerous leprosy. The result of Vaishnava aparadha became immediately manifest. In Kali yuga, Raksasas take birth in brahmana families in order to give trouble to the honest, virtuous people. [C.B. Adi 16.300]

Another time, Haridasa desired to have darshan of the Vaishnavas of Navadwipa. Everyone there became overwhelmed with ecstasy, to see Haridasa. Adwaita Acarya loved Haridasa as much as His own life and he would offer the first prasadam to Haridasa Thakura (which is to be offered only to high class brahmanas) after performing Pitr-sraddha (worship of his forefathers).

Haridasa Thakura lived for some time at Benapol, which was within Jessore district. Every day and night he would chant three hundred thousand Holy Names. At the time, when Sri Caitanya Mahaprabhu displayed His divine opulences by manifesting Himself as the Supreme Personality of Godhead in the courtyard at Srivasa Pandita's house, He was calling his dear devotees: "Haridasa! when those Mohammedans were beating you I was ready to destroy them with My Sudarsana Cakra, but as you were praying for their welfare I was unable to do anything." [C. B. Madhya 10.42]

Therefore I accepted their blows on My own body. Just see, the scars are still here on My body." Seeing those marks Haridasa fainted in ecstatic love. Regaining his consciousness he began to praise the Lord of his life, "O Lord Viswambhara, master of the universe, please have mercy on this sinner, who has fallen at Your feet. I have no good qualities and am a vile wretch, rejected by all classes of men. How can I describe Your divine character?" [C. B. Mad 20.58]

Thakura Haridasa was present during most of the Lord's pastimes in Nadia, and when the Lord went to Jagannatha Puri, Haridasa also went and took up residence there. Everyday, after attending Lord Jagannath's mangal arati, Lord Caitanya would come to see Haridasa Thakura and would bring him some of Lord Jagannath's prasadam. When Sri Sanatana Goswami and Sri Rupa Goswami would come from Vrindavana to Puri they used to stay with Haridasa Thakura. Haridasa, in order to maintain the etiquette, would not go near Lord Jagannatha's temple but would offer his obeisances to the Cakra on top of the temple, from a distance. As he was considered to be a Mohammedan by birth, his presence in the temple would be objectionable to those who were caste conscious.

Mahamaya devi took initiation in the maha-mantra from Haridasa Thakura and Caitanya Mahaprabhu appointed him as the acarya of the Holy Name. His departure from this world, in the presence of Caitanya Mahaprabhu, is fully described by Sri Krsna dasa Kaviraja Gosvami in the Antya-lila of Sri Caitanya Caritamrta.