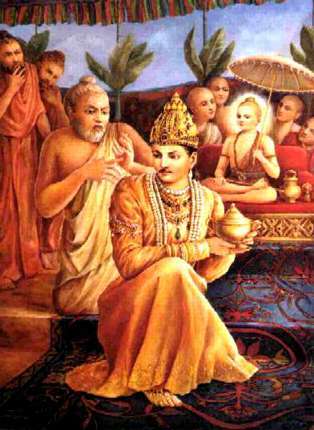 When Lord Vamandev was pleased with Bali maharaj and appeared in Vishnu-rupa, Bali asked a boon that Lord Vishnu would be on every door at Patalaloka because in Nether regions Bali wants his society Lord Vishnu agrees and goes to become a Dwarpalaka of Bali. Narad tells Laxmi where Lord Vishnu is. Laxmi plays trick on Bali - she goes to Bali as a poor woman seeking help - with her she takes raksha bandan. She says to Bali that she doesn't have a brother - and would dearly like one. When the raksha bandan is tied the brother has to offer her something. Bali asked Laxmi what he can give her, Laxmi replied that you have my everything in your service - please release Lord Vishnu.

As Yama's sister is Yamuna and she fed Yama to his satifaction he said that from now on any brother who visits thesister on Bhaidhuj day will escape the hand of Yamaraj - the sister prays for her brother.

Brother goes to sister's house – the very best of foods are cooked, and then the sister feeds brother.

There is another significance to this day culturally: The last festival associated with Deepawali is Bhaya Dhuja, popularly called Tikka in Punjab. In Vedic times, it was called Bhartri-dwitiya. Two days after Deepawali, women and girls apply saffron and rice grains to the foreheads of their brothers to protect them from evil and to wish them long life and prosperity. The brothers in turn give the sisters presents. In Uttara Pradesh and Harayana, the tikka is usually a paste of vermilion with rice grains in it.

A red mark on the forehead is reminiscent of Shiva's third eye and is believed to keep the evil away and thus protect the wearer. With constant wars in North India, the custom of applying a tilak to the forehead of men going to war assumed an aided significance. Mothers, wives and sisters applied tilak to the men to protect them from harm.
(Shakti M Gupta. 1991. Festvals, Fairs and Fasts of India. Page 146.)