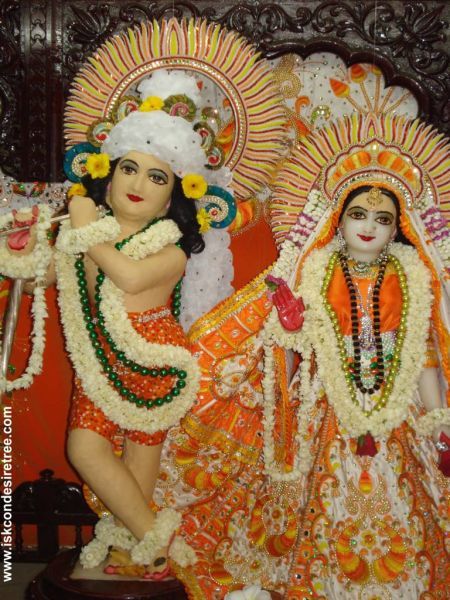 Candana yatra starts on the third lunar day of the waxing moon of Vaisakha month, and continues for twenty days. Lord Jagannatha gave direct instructions to King Indradyumna to perform this festival at this time. Smearing the body of the Lord with ointments is an act of devotion, and the best of ointments is sandalwood paste. Since the month of Vaisakha is very hot in India, the cooling effect of the sandalwood is very pleasing to the body of the Lord.

Sandalwood paste is applied all over the body of Jagannatha leaving only his two eyes visible. The utsava murtis (functional Deities - Vijay utsav) are taken on procession and are placed in a boat in the temple pond. To commemorate this festival, Lord Caitanya also carried out water sports with his devotees.

On the day of Aksaya Tritiya in Vrindavan, all large Goswami Temple Deities are covered with chandan Paste and not a bit of cloth used to cover the deities in the afternoon. The festival is also celebrated in our ISKCON Vrindavan temple and it usually continues for 21 days with the Utsava Vigrahas covered in chandan. The Deities are covered completely with chandan(sandalwood paste), which provides the Lord relief from the scorching heat of summer in the month of Vaisakha/Jyestha (May/June). 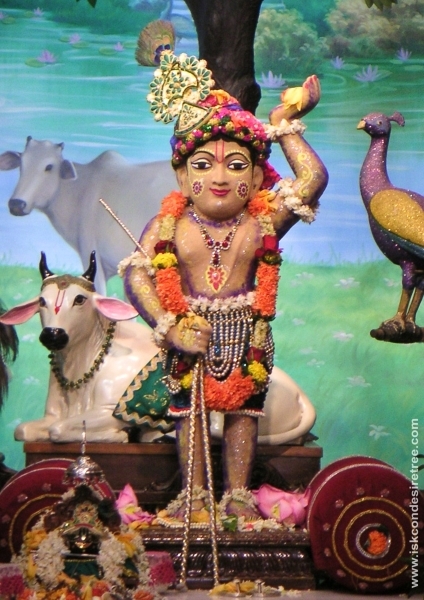 Chandan yatra is said to have been celebrated first on the day when Treta-yuga began. Sages and devotees perform homa (yajna) during this holy occasion. Usually barley is used as a major ingredient for homa. Ganga Devi is said to have descended to earth on this day. People also perform special puja on the occasion of this holy day. Bathing in a holy river, offering charity, performing japa and fire sacrifices, offering barley in sacred fire, and preparations of delicious food using barley are common celebrations among the people.

In the Mahabharata, the Pandavas lived in disguise in the palace of King Virata during their Ajnatavasa. After Bhima killed Kichaka, King Virata realised that the Pandavas were living in his palace. The king felt proud of them and made strong bonds of friendship with them. Once, the king expressed his desire to have a darshan of Lord Krishna with the Pandavas. Yudhisthira then advised the king to organise a boat journey in a lake for the amusement of Lord Krishna in summer months.

The king also organised to embalm the body of the Lord with sandalwood paste in fragrant water to comfort Him from summer heat. Satisfied with the devotion of King Virata, Lord Krishna arrived with his elder brother Balarama. The two Lords and the Pancha Pandavas enjoyed the Snana-yatra and rowing festival. Thus with the close association of Lord Krishna, the pious king fulfilled his devotional desire. To commemorate this incident, Lord Jagannatha (Krishna) enjoys Chandan Yatra with Pancha Pandava at the Narendra Sarovar. This festival is known as Chandan Mahotsava. Prior to the existence of Narendra Sarovar, this festival was said to have been observed in other tanks like Benta Sarovar. 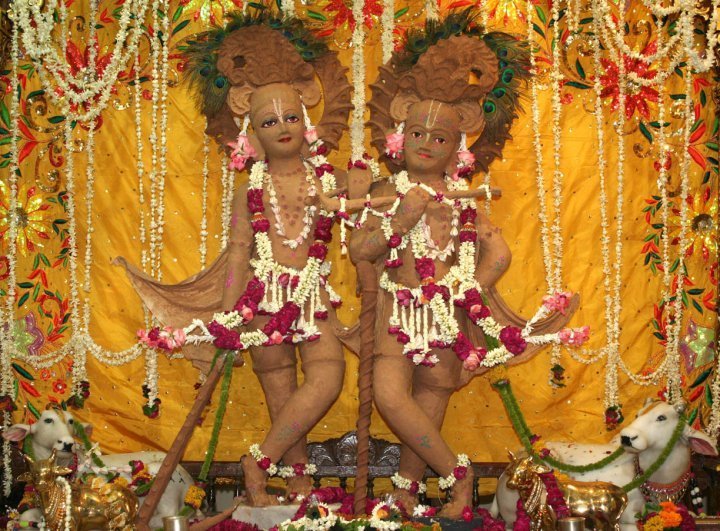 Madhavendra Puri was a great follower of the Gaudiya-sampradaya. When he was in Govardhana, he dreamt of a deity of Gopala dug in the jungles. The Lord said, “Madhava, I am much suffocated in the jungle beneath the earth. Please excavate my place and install Me in a temple.” So Madhavendra Puri, with the help of the Annore villagers, excavated the earth and found the deity and Gopala was installed on top of the Govardhana Hill. One day, Gopala said, “I was beneath the earth for long and My body is worn out. Would you please bring some sandalwood from Jagannatha Puri and smear on Me with its pulp and soothe My body?”

Madhavendra Puri was then an old man and he couldn’t deny the order of Lord Gopala. So he set out to Jagannatha Puri. On the way, he reached the Remuna where the Gopinätha temple is located at the border of Orissa and Bengal. He stayed there overnight and saw that the pujari offered twelve pots of ksira to the deity. So Madhavendra Puri thought, “If I could taste a bit of ksira, then I would also make similar offerings to my Gopala in Vrindävan. Immediately, his consciousness scolded him, “Oh, I am so stupid. Before offering it to the Deity, I think of eating it.” Realising his mistake, he immediately left the temple. He went outside and sat beneath a tree and chanted the Hare Krisha Mahamantra to pass the night. At night, the Deity appeared in the dream to the priest and said, “I have shielded one pot of kshira (condensed milk) behind My garment. Take it to Madhavendra Puri sitting beneath the tree outside the temple. The priest reached the temple and did so as instructed. Then the priest described the whole episode to Madhavendra Puri. Thereafter, Gopinatha became famous as Kñéra-cora, who stole ksira for His great devotee.

In the next day morning, Madhavendra Puri set out to Jagannatha to collect chandan for Gopala. Before he reached Puri, the news was spread there that Gopinatha stole kshira for Madhavendra Puri. At Jagannatha Puri, Madhavendra met the pujari of Lord Jagannatha and expressed the desire of Lord Gopala. The pujari took him to the King of Puri. Hearing the episode, the king gave him one mann (nearly 37 kg) of special sandalwood used in Puri and two security guards and gave him a written order not to harm Madhavendra, the carrier of chandan. While he reached near Gopinatha, Govinda appeared in his dream and said, “Madhava, you embalm Lord Gopinatha with sandal paste so that I too would receive it, for Gopinatha and I are one.” Madhavendra Puri anointed Lord Gopinatha with chandan paste as Gopala instructed. The Chandan Yatra festival started since then to commemorate the incident. 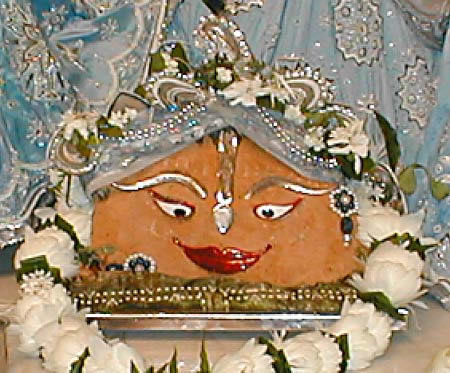 Please see the extract from Caitanya Caritamrita below to commemorate the event. (Translation and purport by His Divine Grace A. C. Bhaktivedanta Swami Prabhupada):

PURPORT:
The Deity of Gopala had been buried within the jungle for many years, and although He was installed and was offered thousands of pots of water, He still felt very hot. He therefore asked Madhavendra Puri to bring sandalwood from the Malaya province. Sandalwood produced in Malaya is very popular. That province is situated on the western ghäöa, and the hill Nilagiri is sometimes known as Malaya Hill. The word malaya-ja is used to indicate the sandalwood produced in Malaya Province. Sometimes the word Malaya refers to the modern country of Malaysia. Formerly this country also produced sandalwood, but now they have found it profitable to produce rubber trees. Although the Vedic culture was once prevalent in Malaysia, now all the inhabitants are Muslims. The Vedic culture is now lost in Malaysia, Java and Indonesia.Please visit the links below to see the photos of the festival
https://picasaweb.google.com/108404439028493365604/ChandanYatraFestival 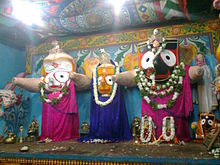