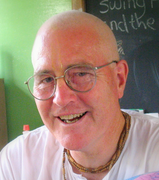 film producer working on "Celibate in Chelsea" a film about someone becoming a devotee of Krishna. These are links to "Celibate in Chelsea" the mini movie trailer preview produced by Jnanagamya das, Jaya Nrsimhadev Productions. Part 1 http://www.youtube.com/watch?v=x8KQv7kZatQ Part 2 http://www.youtube.com/watch?v=fkKLwguues8 The videos are copyrighted and cannot be shown for profit without written permission from the producer Jaya Nrsimhadev Productions Anyone interested in further information about the project or desirous of sending a critique on the works shown are welcome to write: jnanagamya@yahoo.com