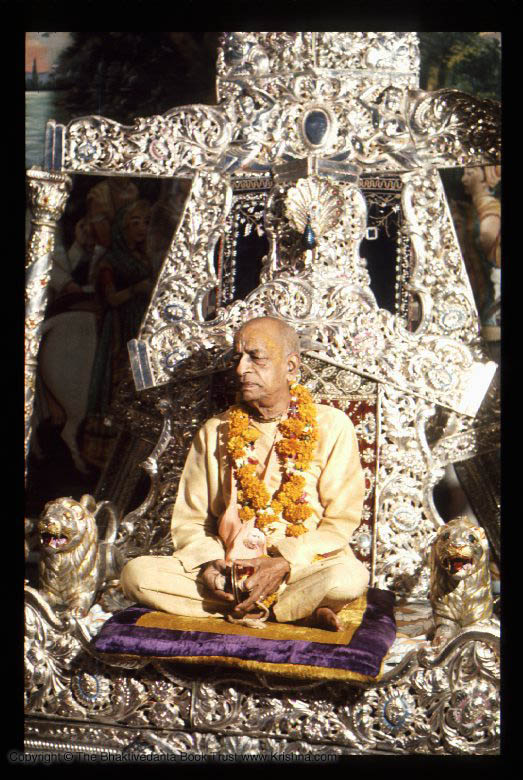 It is said, vaiṣṇavānāṁ yathā śambhuḥ: Lord Śiva is the best of all devotees. Therefore all devotees of Lord Kṛṣṇa are also devotees of Lord Śiva. In Vṛndāvana there is Lord Śiva's temple called Gopīśvara. The gopīs used to worship not only Lord Śiva but Kātyāyanī, or Durgā, as well, but their aim was to attain the favor of Lord Kṛṣṇa. A devotee of Lord Kṛṣṇa does not disrespect Lord Śiva, but worships Lord Śiva as the most exalted devotee of Lord Kṛṣṇa. Consequently whenever a devotee worships Lord Śiva, he prays to Lord Śiva to achieve the favor of Kṛṣṇa, and he does not request material profit. In Bhagavad-gītā (7.20) it is said that generally people worship demigods for some material profit. Kāmais tais tair hṛta jñānāḥ. Driven by material lust, they worship demigods, but a devotee never does so, for he is never driven by material lust. That is the difference between a devotee's respect for Lord Śiva and an asura's respect for him. The asura worships Lord Śiva, takes some benediction from him, misuses the benediction and ultimately is killed by the Supreme Personality of Godhead, who awards him liberation.

Tags: ‏, a, behave, devotee, does, how, krishna, lord, of, q
Email me when people reply –
Follow